People in my books – grand’mere 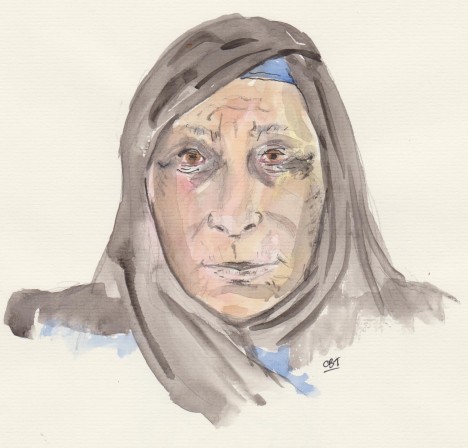 Grand-mere was born in Algeria and lived there all her life till her son moved to France after she was widowed.  Along with her daughter-in-law, Fatima, and her grandson, Hussein, they moved in to a HLM (Council flat) in a poor area in the suburbs of Paris.   The plan was that Hussein and her son would work, earn vastly more than they could in Algeria, and then they would all return to Algeria with enough funds to build their own house.

Initially, they hoped they would be only 2 or 3 years in France, but the stay dragged on for longer.  Grand’mere was homesick and unhappy, though she recognized that the standard of living in France, even in a poor Council flat, was considerably higher.

She said nothing, and for good reason, but when she found that Hussein was seeing an English girl, she was shocked and angry.  She pitied the girl, as time went by ….

Extract from “A Call from France”:-

“I handled that really badly,” I said to my father when he phoned the next evening.

“Well, I daresay you over-reacted when you thought Debs had disappeared again, but it’s perfectly understandable under the circumstances.”

“The trouble is Debbie and Hussein don’t see it that way. I don’t think Debbie really has the remotest idea what she put us through.”

“Probably not. Young people are like that. Try to forget about it. Leave it a day or two and then phone them as if nothing has happened.”

I followed my father’s advice and phoned Debbie a few days later. It rang for a long time and, after several attempts during the course of the day, it was clear to me that they had unplugged the phone. I wrote her a letter.

The letter was weak and didn’t convey what I was trying to express. I posted it all the same. But when I tried phoning again later that same week a voice told me that the number was not in use. I was shattered. How could they be so cross that they’d actually change the number?! Heavens, I thought, it was barely a row at all!

“He seems to have a bee in his bonnet about being an Arab,” said Euan.

“He is a childish and ignorant MOON FACED APE!” I roared.

The days tripped by and I tried to forget about it. My father came out to stay with us for a few weeks and was disappointed to not see Debbie. Short of driving to Royan and banging on her door I could not get hold of her.

“Well, let’s knock on her door,” said my father, “it’s not as though we’re asking anything unreasonable. It is quite normal that I should want to see my grandchild.”

Our reception was very frosty, though something I learned early on was that Debbie was far more amenable in every way if Hussein was not there. I watched her closely for signs of fear, but there were none. It seemed almost as if her personality changed if Hussein was in the room. He had a way of flexing his muscles (metaphorically speaking) when there was absolutely no need to flex them. He felt threatened when there was nothing threatening there and, as Euan had pointed-out, was sensitive to the point of being ridiculous about his Arab blood.

“A Call from France” is a must-read for mothers of teenagers!

Catherine Broughton is a novelist, a poet and an artist.  Her books are available from Amazon (as above) or Kindle, or can be ordered from most leading book stores and libraries.   More about Catherine Broughton, to include her entertaining blogs and sketches, on http://turquoisemoon.co.uk

For more about Muslims in France: