The story of Madame Tussaud.

I recently gave a talk about Mme Tussaud to the U3A.  Here it is, in a nutshell. 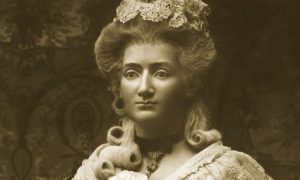 Anna Maria Grossholtz, called Marie, was born in Strasbourg, France, in 1761.  Her father, Joseph Grossholtz, was killed in the Seven Years’ War just a few months before she was born.

While Marie was still just a tot, she and her mother moved to Bern in Switzerland.  There they moved in with one Doctor Curtuis where Marie’s mother became housekeeper. We don’t know how her mother, Anne-Marie, found the position of housekeeper, nor when or where she met Doctor Curtuis, but there is a lot of speculation that Marie was in fact the doctor’s child: he was extremely fond of her and raised her as his own, left everything to her when he died and – on a more practical level – Bern was a long way to travel for a housekeeping job, and Strasbourg is a long way to send to for a new housekeeper. 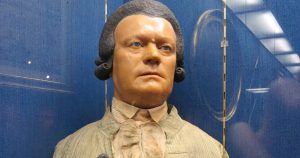 Curtuis was a medical doctor with an interest in figures in wax. He made wax models to illustrate and study the human body.  He taught little Marie the art and she proved very talented.  Although gory to our modern eyes, we have to remember that death, the sick and the dead were far more visible 200 years ago.  Young Marie probably didn’t make this kind of model, if only because of medical accuracy, but she’d certainly have seen them. 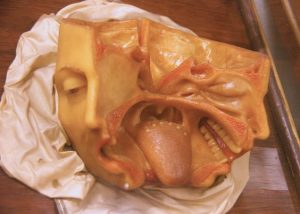 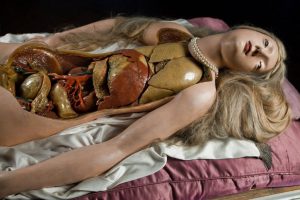 . the Prince of Conti

A young French prince by the name of Jean-Francois de Conti met Doctor Curtuis as he was passing through Bern.  He was fascinated by the wax figures and suggested to Curtuis that he set up a portrait salon in Paris.

Curtuis packed up and moved to Paris.  He established a salon or shop of some sort, set up house and sent for Marie and her mother.  This is another reason why there is a strong possibility that he was Marie’s father. 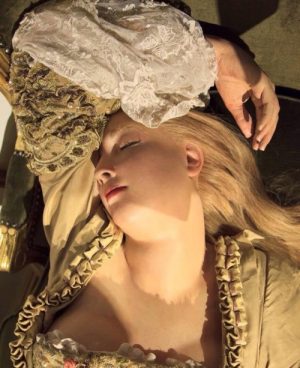 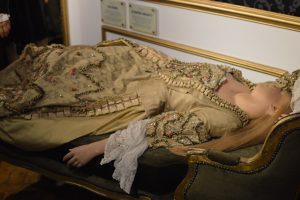 The salon was a huge success. There was no photography and people had to rely on portraits to see a likeness of one another.  The 3D life-like portraits produced by Curtuis and Marie were massively popular and they very soon became famous and probably quite wealthy.  One of their many clients was Madame du Barry, the king’s mistress, and here we see her in wax as the Sleeping Beauty.  There was a tiny clockwork mechanism in the chest to make it look as though she was breathing.  It was a sensation, and the rich and famous from all over Paris flocked to see the figures. 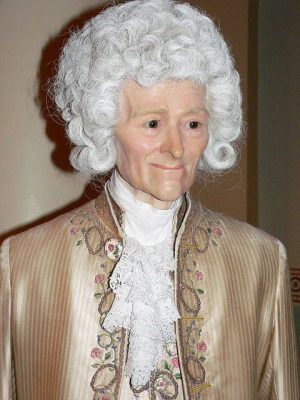 . Marie did this figure of the writer Voltaire when she was only 16 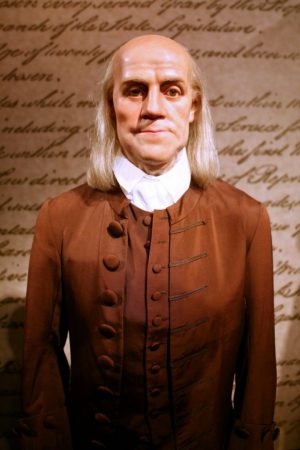 Another of Marie’s figures – Benjamin Franklin. He was the first American ambassador to Paris. Soon enough Curtuis and Marie were invited to the Palace of Versailles.  We only have Marie’s journals, written much later in life, to verify this, but there is no reason to think they were anything but accurate.  Marie taught the king’s sister, Madame Elizabeth, how to make wax votive candles, among other things.  Marie knew the king, Louis XVI, the Queen and the family in general and, of course, Madame du Barry.  Life was good.

In 1779 the French Revolution began.  The French wanted the same rights and liberties that had been established in Britain over 100 years earlier, as well as in Prussia and – just – in America.  In a nutshell anybody associated with wealth and power was “against” the new regime that was demanded in France, though this chopped and changed as various politicians came and went within French governmental circles.  This meant, however, that the king and queen were arrested and flung in to prison, along with the two surviving royal children (two had died), the king’s sister, and many others.  Madame du Barry fled to England, as did hundreds of others. 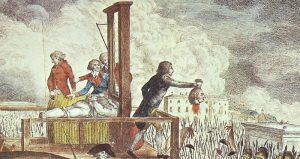 Marie and Curtuis were also arrested. In prison with Marie was the young Josephe-Rose, better known to us as Josephine Bonaparte. 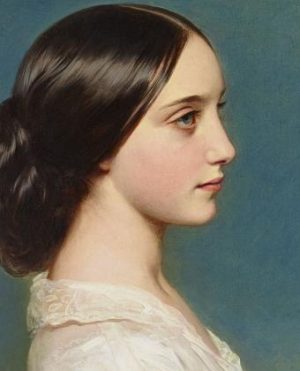 .  Josephe-Rose de la Pagerie, who became Madame de Beauharnais and later Josephine Bonaparte.  Her young husband was also arrested and guillotined.  Josephine herself managed to get away.

Marie and Curtuis were able to save their lives by working for the regime; they had to make the death masks of famous people guillotined.  Whether they volunteered to do this to save their lives, or were forced to, or were paid to, we will never know.  In her journals she claimed that she had her head shaved ready for the guillotine, and this may have been true.  She was certainly on the death list but was saved thanks to an executioner by the name of Collot who knew the doctor Curtuis and Marie personally. Death masks were important because there was no other way of recording how a famous person looked unless they happened to have had a portrait or a statue done.  Marie had the gory job of making wax moulds of the faces of the guillotined heads.  It must have been horrible. 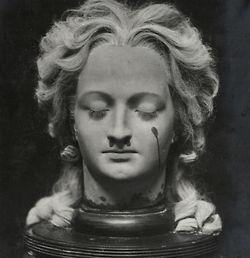 death mask of Robespierre, probably the only one who deserved to die !

The Reign of Terror, as the French Revolution became known, ended after ten years and France slowly returned to some form of normality.  Nothing was achieved except that the rights of citizens were established, something which other countries of that time had managed without a revolution.  Over a million civilians were murdered, including babies and children, rich or poor. The poor remained poor, the rich remained rich (if they weren’t dead!) and the newly established rights of citizens only included land-owning men. Humph!

Curtuis died and left everything to Marie. Most of his wealth had gone during the massacre, his salon ransacked, his possessions stolen.  Alone and traumatised in a man’s world, Marie met and married one Francois Tussaud, and engineer.  They had two sons but the marriage was unhappy.  While France was struggling economically, socially and politically, England was blossoming.  Marie left one of her sons with her husband and took the other with her to England along with a fellow “artist” of sorts who wanted to combine Marie’s wax figures with some kind of light show. Marie soon branched out on her own and travelled all of the UK with her son and her wax figures.  The British knew all about the French Revolution and were fascinated by the wax figures.  She was soon successful and able to settle in her own house in London where she opened her first salon, today’s Madame Tussauds. Marie’s two sons much later in life.  Her plan had been to soon return to France to fetch her other son, but the Napoleonic Wars started and it was impossible for her to travel to France.  Almost ten years would go by before she saw him again.  When she died, in her own bed in her own house in London, aged 89, her two sons and grandsons took over the salon, today even more popular as it was then. . Self-portait of Marie in her sixties. interested in France ?  Book your holiday today. Go to www.seasidefrance.com