People in my books: Bubble-Gum Michel. Employing staff in France. 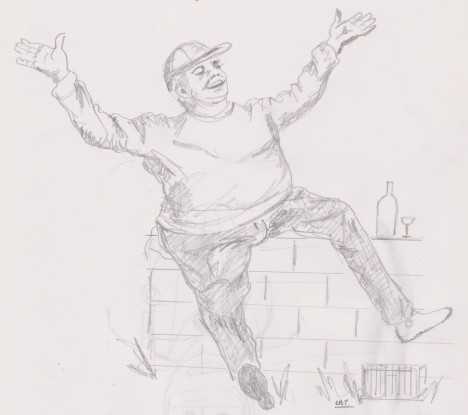 The children nick-named him Bubble-Gum.  It was a good name because there was something about him that made one think of bubble-gum.  He was fat (but immensely strong), not very tall, jovial, noisy, messy, talkative.  He was very familair with everybody, even his boss, and had he not been such a likeable fellow, it would have been bordering on rude.  He had an equally over-weight, but intensely morose, wife about whom he made crude jokes. He had nine children, most of whom worked at one stage or another at either Tulips or Chateau des Cypres.

Bubble-Gum was totally illiterate, and what he lacked in education he made up for in good sense flavoured with brash determination.  He was devoted to the family and had an especially soft spot for Debbie – though his own daughters were treated with that grim resignation one sometimes finds in poor men who have fathered a huge family.  He wheeled Bernie around in his wheel barrow and sent Max to (discreetly he hoped) fetch him a beer from the fridge.

He worked at Tulips for four years and then at Les Cypres for another five.  He was totally loyal but in the end he was asked to leave. As his weight increased, and he grew older, he steadily became dangerous and the more he was warned about safety – on ladders, the roof, bonfires, whatever – the more sloppy he became so that towards the end it was impossible to leave him in charge of anything in case he set it on fire or fell off it and broke his back.  He wept when he was dismissed.

“A Call from France” by Catherine Broughton is a true story and considered a must-read for mothers young and old, especially mothers of teenagers.