From Dubrovnik we followed the coastal road (the E80) down to a place called Igalo, where we crossed the border in to Montenegro.  The sun, ever loyal, came too, blasting through the windscreen and telling us it was high time we gave the car a good wash.  To our right the scallopped edge of the coastline soaked up the autumn sun, and the huge presence of the sea and the sky gave it a feel of majesty and endlessness.

I don’t know.  There is something about the name Montenegro that had made me think it would be totally stunning, that I would pulse on crossing the border and have an overall feeling of wow!  Why I should think that I don’t know, because Montenegro means “black mountain” which is not very encouraging.  The truth of the matter is that we barely noticed we had crossed the border, and the cliff-hung scenery remained unchanged, beautiful though it was.  Occasionally an ancient castle would appear, the ramparts clinging terrifyingly to the escarpment, neatly juxtaposed with vans selling ice-cream and cola, and signs to hotels. 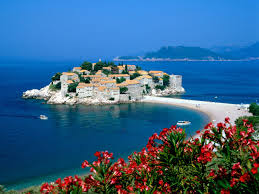 Because of the various health-and-well-being issues we had had, we stopped early in a large hotel on the outskirts of a town called Budva.

We usually avoided hotels – hey, what was the caravan for? – but the campsite had difficult access and it was important that we take things easy.  Once again we were able to park in such a way, caravan and all, that George was a matter of only a few feet away and we could all reassure each other over the balcony as the need arose.  The restaurant overlooked the sea and was magnificent, but we ate in the caravan for George’s sake, though I doubt he appreciated the sacrifice.   During the night we woke to the sound of a bell ringing shrilly. 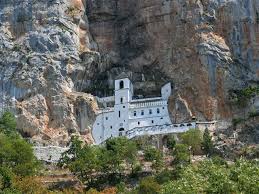 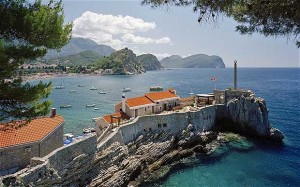 All the best people stay in hotels that catch on fire.  Truly.  If you haven’t done it yet, you should try it.  I lay in the dark and listened to the bell for some moments.  I had given up smoking years and years ago, so I assumed it wasn’t me.  My mind went through the various possibilities – it couldn’t be the car alarm because that was permanantly off because of George.  So it must be a fire alarm.  Deary me.  A fire alarm …. where ?  And in the sleepy fog of I’ve-only-just-woken-up-and-the-wine-at-dinner-was-excellent, I twigged that I must react.  I shook Bruce.  He was lying on his hearing side.  He had to turn over before he could hear me and, in best husband tradition, was hestitant to do so.

“We’ll wait till morning,” he replied.

“Well, switch it off,” he grunted, and rolled over again.

We decided to go over the balcony which was almost on the ground floor anyway – sort-of a quarter of a floor up, if you see what I mean.  George raised an eyebrow at us.  Woozit? Wozz-you-doooin? Fort you said sleep?

There is nothing quite like scrabbling through hibiscus bushes and running around in your nightie on a warm balmy evening when your hotel is on fire.  We got George, who was delighted, and went round to the car park where we could hear, if not see, people gathering.  To my annoyance it was a small fire in the kitchen area, miles away and totally undramatic and boring.  Fancy waking us up for that! said George.   We all hung around for …. I suppose it was barely twenty minutes, but it seemed like ages, standing there in the car park when we were supposed to be asleep.  Somebody switched the alarm off which was a mercy because it was just the kind of thing that could trigger a Meniere’s attack  (http://turquoisemoon.co.uk/blog/the-english-in-france-part-1-our-story-continues-menieres/).

Because the kitchen was now closed due to fire-damage, we wandered down to the port for breakfast and feasted on eggs and toast while we watched boats come in and out.  It was lovely.  Back at reception an Scottish couple were demanding their money back because of the fire.  Honestly!  Some people ! 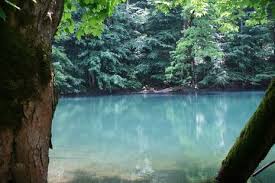 Our road took us up via Virpazai to Podgorico.  One tip I will give you is to STOCK UP in advance.  It was only once we were a couple of hours in to the trip north that we realized how poor everything was, and how sparse the contents of food shops – when we could find food shops.  And everything was au naturel … dead animals of varying sorts hanging infront of the butchers’ shops, skinned and gross.  The heads and tongues were for sale on a slab to one side, along with offal and various bits I didn’t care to anaylize.  Fruit was oranges, oranges or oranges.  The choice in frozen goods was very limited and I felt unsure about any date limits on the packets.  Tins frequently had no labels on them.  Actually, we did have enough already in the caravan to keep us going – mostly tins of sardines and bottles of wine – but I rapidly wished we’d stocked up on a few canned goods after breakfast.

We met no other travellers.  Our plan had been to enter Greece via Macedonia (Philip of Macedon being one of my favourite historical characters) but the lack of other travellers told us that there would be no campsites, and the overall standard of the countryside and its people all around us told us that there would be no half-way OK hotels either.  Not that a five-star hotel is a necessity but it was essential we could park car and caravan in security, preferably near our room because of George.  Little village hotels, if there were any, would be unlikely to have this facility.

And just as the coast had been beautiful, so the rest of the country was poor, dirty, unattractive and barren. 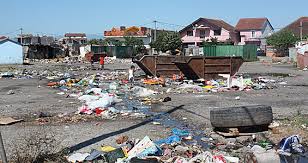 Worse, the people were unsmiling and even slightly menacing.  We stopped only once, naively thinking we’d make tea and a sardine sandwich, and were instantly surrounded by a dozen or so teenage youths.  The didn’t have sticks and stones in their hands, but I felt they could, and we rapidly drove on to Podgorico where, abandoning the road north, we located the only worthwhile hotel in the town and checked in.  We were able to park right outside the hotel, slightly off the road, and after Bruce walked George a short way, again surrounded by youths who wanted to know about the huge dog – but who kept well away – we persuaded George in to the front, gave him his blankets, and told him to guard.

Our room was red.   The curtains, chair covers, bedspread and any other fabric was bright red draylon.  Somebody brought some fish up to our room, and a couple of beers.  I had left the wine in the caravan.  I went downstairs to fetch it and found both caravan and car surrounded by children, mostly teenagers but including toddlers and even a babe-in-arms who looked to be no more than a few weeks old, clutched against the shoulder of a boy of about eleven.   The baby and the toddlers were reassuring – it meant there was no menace.  Inside the car George growled impressively at them.  He was getting upset.  I decided against opening the caravan for the wine in case it triggered unwanted interest in the contents (probably better than in their homes) and shooed the children away from the car.

I realize that is French, but as I don’t speak Serb, French had to do.  I know, I know … but when you’re feeling stressy you do tend to do illogical things …

Catherine Broughton is an author, artist and poet. Her books are on Amazon.