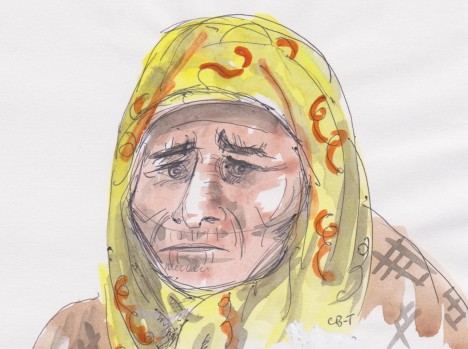 We were awake early in the morning.  We sat in bed drinking tea and poured over maps. We had decided against driving north out of Montenegro and entering Greece via Macedonia.  One reason was that is would be colder, and the other that it would be considerably longer.  Not that we were in a hurry, for we weren’t, but we didn’t feel too confident about the reception we might get as we drove on, the availability of hotels and restaurants, that sort of thing.  What little we had seen of Montenegro, once we were a matter of minutes away from the coast, was discouragingly brown and grey and unsmiling.   Furthermore, we had to get Bruce to a doctor to get his eye checked, as instructed by the doctor in Dubrovnik.

A look at the maps and a few calculations, and we decided to cross the border in to Albania and head south.  There was what appeared to be a road across the mountains in to Greece.  With anybody other than Bruce I wouldn’t have attempted it, but I knew that he would Fix It if something went wrong and that, even if the ride was rough, we’d be in Greece at least four days before we would if we went the other way.

And so after breakfast we wandered, caravan on tow, round various streets, none of which had any signs but all of which we were told led to the border in to Albania.  We went round in several circles. It took some time to locate what was apparently a border; nobody spoke English, French, Spanish or Zulu, and my limited German had trouble getting information out of people we asked – not least because they couldn’t speak German either.  The border, at first glance, seemed to be a derelict gateway in to a dertelict farm.  Closer inspection revealed some armed guards playing cards in a small hut. They didn’t want to see our passports and didn’t notice the massive dog in the back. 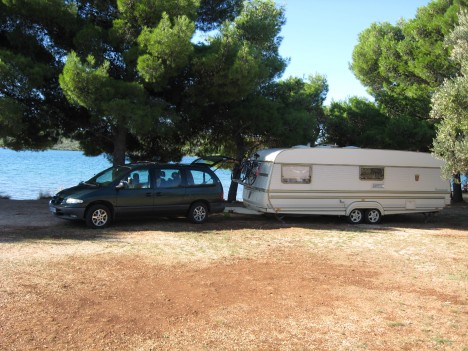 I realize this is the third time I have shown you the car and caravan, but it is important to remember the size of our rig.  Some of those roads were something!

If we had thought Montenegro was grey and brown and unsmiling, it was sunshine yellow compared to Albania.  I took off my earrings and gold watch and hid them under the seat of the car.  Everywhere we looked were groups of six or seven men standing at street corners, unsmiling, dark, swarthy and wearing old black jackets.  Small dwellings and mean little shops lined the streets, stray dogs and cats and extraordinary quantities of rubbish.  Rubbish, stinking, and housing rats and scavenging children was everywhere, piled in to hills of stench and flies.  The people were poor, underfed and in bad health.  Everything, but everything was dirty and tacky.  I loathed it. 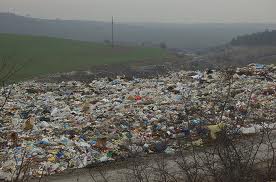 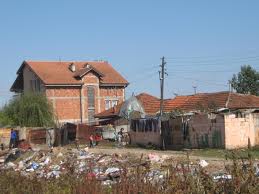 But it was the feeling of menace that I disliked so much.  I have seen a lot of poverty in Africa but, generally speaking, the African will wave and smile as you go by. Here there was just a look of sullen unpleasantness.

We travelled south as far as Durres where we stopped for lunch.  We had seen a programme on the TV about Durres and, sure enough, it was several notches better than any of the towns we had passed through.  We parked on the sea front.  George was desperate to get out of the car and in no time we were surrounded by a crowd of boys, all open-mouthed in astonishment at our huge dog.  One or two could speak a little English.

I made us sardine sandwiches in the caravan and, while Bruce lay down to rest his eye and his Meniere’s, I found a lorry driver who could speak some German.  After a few guten tag and handshaking, I asked him if the road through the mountains in to Greece was passable in view of the size of our rig.

He explained that he had driven his lorry over the mountains several times and, judging by the gestures, he was telling me there were perilous drops and narrow passes, but that it would be OK mit achtung.

“Yes, it’ll be OK,” I reported back to Bruce, “mit achtung”.  A lorry driver has been over several times.”

“Jolly good,” Bruce said, and we set off again, still heading south and skirting the mountains most of the time, sometimes going up over ridges.  We stopped overnight in an hotel in Vlore and set off early again in the morning. 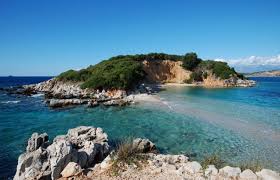 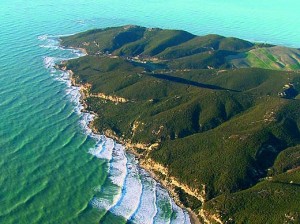 As much as the north and centre of Albania was ugly and poor, so the south of Albania was beautiful.  I can honestly say it was one of the most lovely areas I have ever been to.  Stunning mountains and breath-taking sea views, mile upon mile of velvet hills, superb forests, azure sky … we were mesmerized.

“We need to stop at the next village and buy food for George,” I said.

The road wound on, in parts very rough and in parts quite good.  Chicken wire was rigged up to mark precipices and to stop – one assumes – us going over the edge.  Yes, excellent.  More incongrously we saw a pedestrian crossing road sign –  there were not even any other vehicles, let alone pedestrians, for miles and miles.  But I suppose they had to put it somewhere, and chose a very lovely mountain pass.  Eventually we came to tiny shanty-village boasting  a large modern shop with SUPERMARKET written on the front.  We could see through the windows that all the shelves were bare and the place was thick with dust.  Oh dear, poor George.  We stopped anyway and let him out.  He was the human equivalent of 100 years old then and he couldn’t wait for either food nor water – nor his doggie-doings either.  And believe me, if a Great Dane has an accident it is a very big accident!

A group of women suddenly appeared out of the little shanty-town village.  Dressed in extremely shabby varieties of Muslim  garb, with rubber flip-flop shoes, they surrounded us.  There were no men. They seemed to be trying to ask us something.  They were not begging, and they were not selling anything.  I, in turn, tried to ask them if there was any food to be bought and eventually, by rubbing my tummy and making eating motions, they understood.  Yes, yes, follow us they said, and I disappeared with them down a narrow alley with makeshift dwellings on either side.  It was clean in that there was no litter, nor unsavoury smells, but rags covered the windows and Poverty was written on every inch. 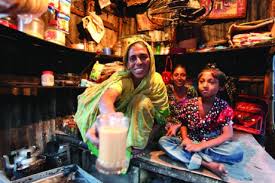 Eventually, after winding our way through several little passage-ways, me in my Jaeger slacks and top, and some seven or eight of them in all their dark draperies, we ducked under a low door and I found myself in what was apparently a shop.  It took a few moments for my eyes to adjust to the darkness, and I saw several shelves on which were arranged an assortment of tins with no labels.  Flies buzzed round and round. There was barely enough room in the shop for us all, and all the women started to babble at me and pointed to the shelves.

Stupidly I had left my sketch pad in the car.  My sketch pad goes everywhere with me and I have been able to explain what I need in many countries thanks to it.  I wanted meat for my dog.  I picked up a tin.

Oooh, no no, it’s not baaaa-baaa. They understood immediately.

I imitated picking something from a tree.

Yes, yes, they all agreed, it had come off a tree.  They were thrilled.  George wouldn’t want it, but I put it to one side to purchase, because they clearly wanted me to buy it.

“Baaaa-baaaa?” I asked, gesturing to the shelves.

They all looked crestfallen.

“Oink-oink?” I then asked, realizing as I said it this is a Muslim country.  So I changed it quickly to “moo-mooooo?”

Ah yes! They were delighted.  One of them reached up and grabbed a tin of moo-moo.  They were even more delighted when I said I wanted four tins of moo-moo.  I paid them, keep the change I said, and how do I find my way back to the car ?

In a flurry of long grubby robes, they led me through all the little alleys back to the car. One of them stood still while I did a sketch – she wouldn’t smile.  Somebody afterwards told me that some Muslim cultures don’t approve of human representations.  We drove away and they all waved.  I often wonder what they’d have thought had they known that their tins of moo-moo were for the dog.