Part 8. The English in France: Mostar and Sarajevo.

Another of several attempts to draw George.  He was getting really old and thin and his eye-lids drooped.  All he wanted in life was to sit at Bruce’s feet, have his ears tickled and sometimes a bit of food.  He liked raw minced beef and cooked chicken breast, but it became difficult to persuade him to eat his biscuits.  If we tried to mix the meat up with the biscuits he would, with that huge tongue, simply separate it with no trouble at all.  He liked a bit of tea, good old Englishman that he was. I was always grateful he didn’t become dribbly the way some Great Danes do.

We saw the surgeon another two or three times before Bruce was released from hospital about eight days later.  She kept repeating that Bruce was lacky, lacky, lacky.  We thanked her profusely and she wrote a report in Serb that we intended to get translated for our doctor in France, though we never did.

The sun, our faithful companion through much of our trip, reappeared on a quasi-permanent basis, and Bruce spent two days sitting in a camping chair overlooking the roof tops of Dubrovnik, George at his feet.  Poor old George was so grateful when Bruce reappeared, but seemed to understand that he must not get excitable, and certainly not jump up.  Mark you, he was too old to bother with jumping up.  Actually, we trained George at a very early stage to never jump up.  It is annoying enough when a small dog does so – in fact it makes me really cross that owners don’t train their dogs not to – but if a Great Dane jumps up it can herald disaster, especially an 80 kg one like George.   Anyway, he lay quietly at Bruce’s feet, accepting the fondling of his ears, and thumping his old tail on the grass at odd intervals. 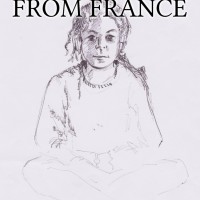 Working from the caravan

I spent my time working on my book “French Sand” (though at that time it was called Jacaranda) and sending/receiving faxes from Henri and Edith.  They had carte blanche to open my post and sent a copy of a really nice letter saying that “A Call from France” was selling well and getting good reviews.  All writers need that kind of encouragement. I checked my e-mails a zillion times a day and took bookings for our gites back in France – that now seemed like a different world.

One of Bruce’s eyes remained covered and we were told to not start removing the bandage for a few days, and then to do so only gradually till the eye was accustomed to daylight again.  We talked about going home.  But Bruce – despite all this – was (and is) a big, strong man, very fit, and it seemed implausible that he was really not well enough to continue our trip. 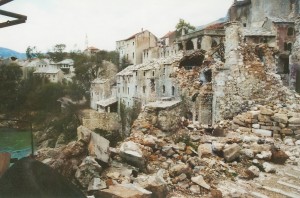 Much of Mostar had been repaired and re-built, but there were still large areas of bullet-riddled houses and ruined walls.  Our guide told us his own father had been shot dead by a neighbour – and the neighbour was still there.  There was so much forgiveness to be done.  So much.

On the third day we locked the caravan and set off for Mostar with just the car.  I drove.   Our road took us up in to the hills, totally blackened by fire – mile upon mile upon mile of blackened trees and grasslands.  We were to see a great deal more of this in the months ahead, and it is only when you drive through such extensive areas of fire-scarred countryside that you realize just how devastating it is.

In Mostar we stayed in one of the nicest hotels I have ever stayed in – and, Lord knows, we have stayed in plenty of nice hotels over the years.  I tried to find it on Google so that I could recommend it to you but I couldn’t – either it has changed its name or I just don’t recognize the name.   George, as ever, slept in the back of the car, just one floor below our balcony so that we could chat to him.  Occasionally he looked up, raised an eyebrow, and went “Humph!”.  We told him to not bark, and he didn’t. 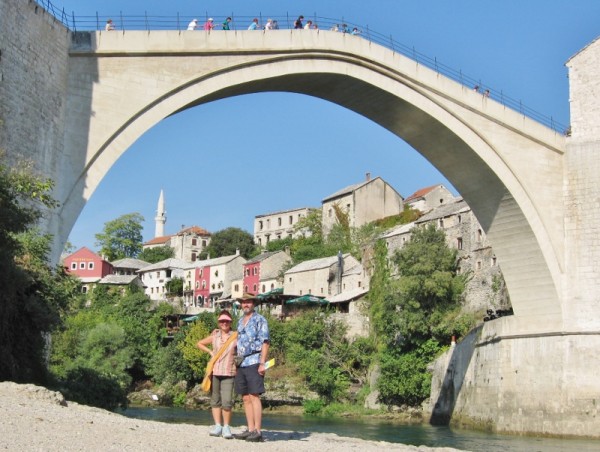 With Bruce standing under Mostar bridge.  I see Bruce’s eye-patch has gone.  The bridge is a very symbolic part of the town, uniting the two sides.  Indeed the word “mostar” means “old bridge”.  It had been blown up during the Bosnian war and our son William, then aged 14, had been to see it with one of my sisters and the charity War Child, just a year or two after the war ended.

It should be obligatory to go to places like Mostar.  Walking around it, by now some ten years after the Bosnian war, is a salutary lesson in the follies and the stupidity of war, and of the crass  imbecility of the  quest for power.  It was all about power, that war.  The scars were still everywhere, there in Mostar and in Sarajevo, and out in the countryside where we saw old and new houses side by side and little collections of graves :  DorDe age 2, Anto age 4, and the parents.  Then the next house:  Bozidar aged 2 weeks, Cveta age 3, Danilo aged 5, and the mother …. and so on, house after house, dotted all over the countryside.  I was to see a very similar thing in Sri Lanka some years later, a result of the 2004 tsunami. 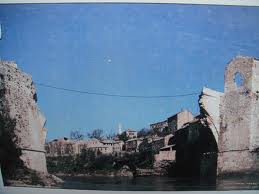 Before and after photos of Mostar Bridge.    The was an idiot tradition of young men jumping off the bridge in to the water to prove their virility (yes, yes … it beggars belief, I know …) which I think – and hope – has been discontinued after a young man died doing so just a few months before we were there.  After all that waste of life during the war, it was such a cruel irony. 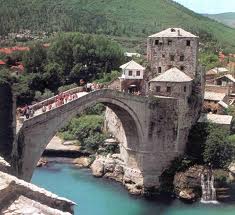 A few days later, the bandages gone, and feeling altogether more human, we set off for Sarajevo.  En route we diverted to Medjugorje which is a small town and a hill.  On that hill six teenagers claim to have seen the Virgin Mary in 1981 but, as far as I know, this has never had the OK from Rome.  It is a pilgrim’s favourite, especially if you are a Roman Catholic.   The hill was really crowded with climbers clambering over rocks, some of them barefoot as part of some kind of pennance and others – very much to Bruce’s consternation – seemed to be praying to rocks.  I told him they are probably doing the Stations of The Cross or something similar, having been raised RC, now thoroughly lapsed.   It was in Medjugorje that I got my one only traffic ticket.  To this day I am not sure what I did wrong, but the policeman pulled me over and was absolutely determined to give me a fine which he wanted me to pay for right there and then.  It wasn’t much – perhaps £2 or something similar, but I suppose it just went in his pocket. 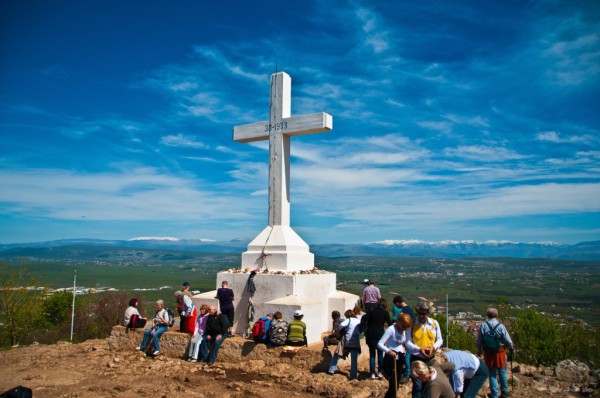 Tact is not my greatest virtue, so I will just keep quiet about what I think about this pilgrimage, the barefoot supplicants and the rocks being prayed at.  The view, however, was lovely, truly lovely.  Wherever or whatever God is, he is certainly in places like that. 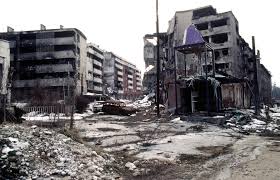 Before and after shots of Sarajevo.   It is the capital of Bosnia-Herzegovina and is sometimes called “the Jerusalem of the Balkans” because – despite the dreadful war not long ago – has a RC church, an Orthodox church, a mosque and a synagogue all almost next to each other.  It is the scene of the murder of Archduke of Austria, which triggered WWI.  Another claim to fame (among many) is that it was the first city in the world, after San Francisco, to have a full electric tram system. 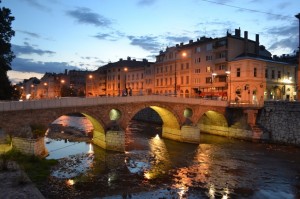 We headed back cross-country, passing warning signs about landmines all the way.  We stopped at an odd little shop and bought some frozen chicken for George.   There was no such thing as pet food – and nor was there for many weeks to come – and, because the shop owner seemed so delighted to have me in the shop I also bought some biscuitty things and a few tins of beans, all of which I was later to give to a group of woodcutters camping in the ashes at the side of the road, and felling the burnt trees.   This was also a scene we were to see a great deal of – whole families in make-shift little tents, cutting and stacking the burnt wood.

It was very late when we got back to our caravan in Dubrovnik.  We rested for a day, prepared the caravan, and then set off for Montenegro.  This is where our adventures really began.

Catherine Broughton is an author, an artist and a poet. Order her books on Amazon.