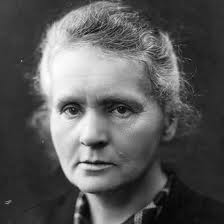 Marie Curie was Polish.  She has gone down in history as French, but she was Polish, born and raised there and extremely patriotic.  She’d have preferred to die and be buried there.  She always spoke to her daughters in Polish and returned several times to her homeland. Indeed, she used her maiden name, calling herself Maria Sklodowska-Curie.  She named the first chemical element she discovered, in 1898, POLONIUM.

So, she was Polish.

She found herself in France because at that time women in Poland were not allowed further education.

Marie Curie was born to teachers in Krakow in 1867.  Under the Russians, all Poles had lost their property in 1863 – a few years earlier – and the Sklodowska family lived in considerably straightened circumstances, where advancement for anybody, regardless of gender, was difficult.  All of the Sklodowska girls were very bright, and Marie followed her older sister to Paris to work and study.

and constant barriers, Marie became the first woman professor at the Sorbonne (the Paris University).  Her pioneering research earned her the Nobel prize and triggered a violent response from the French press, who dubbed her “an interfering foreigner”.  She was the only woman who won two Nobel prizes in Science, and she also won them in multiple science sections … by which time the French press were hailing her as a great French heroine.

She met her husband, Pierre, in 1895.  She married him in Paris, wearing the plain navy blue dress that she wears in most of her photos. She was a dour and unsmiling woman, a scientist through and through, though looking at her early photos she was quite pretty. They had two daughters, but Pierre was run over and killed by a horse and cart in 1906.  Marie was devastated and tried to return to Krakow – unsuccessfully because it was still impossible for women to work.

She died in Paris when she was 66, killed by her own discoveries.  In those days the dangers of radioactivity were not understood, and to this day all Marie’s old papers are kept in lead boxes, and even her cookery book is still radioactive. 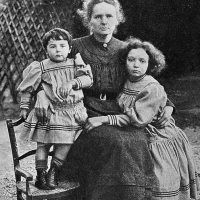 Marie with her two daughters, Eve and Irene.  Both girls grew up to be noteworthy scientists, and Irene was awarded the Nobel prize for her work. Eve lived to be 102!

A holiday in France ?  Lovely self-catering properties in the Charente Maritime. Visit www.seasidefrance.com

Her books are available on Amazon & Kindle, or can be ordered as paperbacks from most leading book stores and libraries.