We restored a huge old house in France. Part 2. 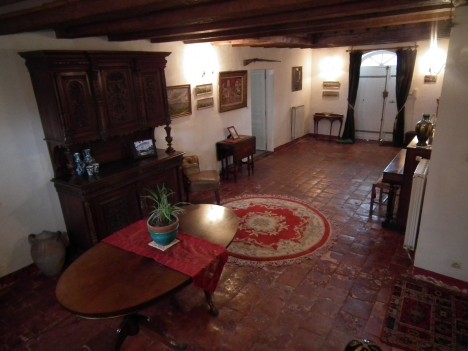 The ground floor of the property, measuring 200 sq metres, has these ancient quarry tiles over two thirds of the floors.  Of course, because there was such a huge amount of restoration work, we ignored the floor for quite a long time, and I used to just mop it and mop it and then mop it again in attempts (invariably futile) to keep the dust at bay.  It always looked great when it was wet !

The previous owners, two brothers who didn’t get along, had split the house in to two, which meant that in the middle of the hall there was a wall and a staircase where a wall and a staircase shouldn’t be. Jake, who was then aged five or six, was excellent at generally bashing things, and the older two children (then aged …. I’m trying to think …. about 12 and 14, I’d say) were even better.  Between us we demolished the wall and removed the staircase.  This is what caused such huge quantities of dust.

Dust and neglect was ingrained in the entire building, of course, but once the demolition of the wall and removal of the staircase was done, the dust was a zillion inches thick.  The children carted, using wheelbarrows, all the rubble out in to a skip.  Back and forth, back and forth.  I had to wash my hair every day and even then it took on a delightful greyish matted look, gorgeously embedded with grit.  Had I had any sense I’d have had it cut short, for in those days it was very long.  (I had it cut short one Christmas in Cyprus, but that is a different story). 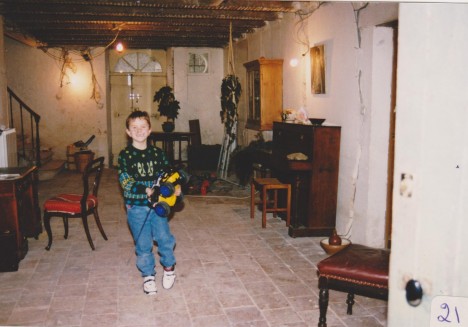 (the dusty floor remaioned like this for a year or more)

A big mistake we made was that we removed some of the floor tiles so that we could run the central heating pipes along under them.  On the face of it that seems a reasonable thing to do, otherwise the pipes would have to go around the walls ( a long way) which in turn meant a lot more pipe, which led to a lot more work. The pipes would then also be visible unless we boxed them in – which represented even more work.

So we laid the pipes under the floor tiles.  We had a young Englishman by the name of Mat staying with us at the time.  He was an assistant teacher at the children’s school and, a bit lonely, came to us at week-ends. We loved him to bits. Anyway, Mat did most of the laying of the pipes, wrapping them carefully first so that they wouldn’t freeze in the winter.

What we didn’t realize was that the heat of the pipes, once the central heating was up and running, would crack up the floor tiles.  It seems obvious enough now, but at the time, working hell-bent-for-leather and with winter already upon us, it wasn’t obvious at all. So for several years there was a patch of floor tile that was pale and crumbly; we eventually laid red cement over them and, although they certainly don’t look good, it all blends in and is fine.

I think that is something of utmost importance when you take on a huge project like this, particularly when you have a tiny budget as we did: do not fuss too much where fuss isn’t really needed.  You cannot be a perfectionist at times like this, otherwise you will never get the job done.  We know a man who spent four years trying to install his central heating; he was so careful about everything, so precise … he never got the job finished and in the end they called a plumber in, which they might as well have done in the beginning.

Had we carefully measured each tile, each pipe, each length or width of this or that, we’d still be at it today.  There are quite a few things that have not got that professional finished touch but it doesn’t matter to us.  The house is nonetheless great, most people love it, and those who don’t – well, that’s fine, they don’t have to. 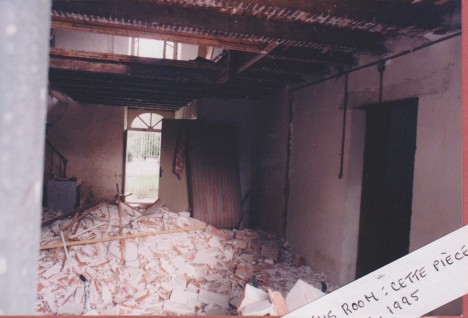 Anyway, I bought all sorts of different things to treat the tiled floor with.  I tried one thing after another, asked the tile people up the road, and then the tile people down the road. But nothing seemed to help.  I painted a damp-proof product all over the surface, and the only result was back ache.  I mopped cheap polish over it, expensive polish, black soap, linseed oil and Lordy knows what else.  But the tiles remained dull and featureless.

I hit on shoe polish when I was at the cobbler’s one day.  On his shelf I noticed a jar of shoe polish which was more-or-less the exact same reddish-brown hue of the tiles.  I bought it, tried it out on a few tiles – and hey presto!  Shoe polish is slightly damp proof, and it is a waxy product that buffs up to a shine.  Another back-breaking job which took me days and days.  Really, it should be done every three months or so, but I can’t.  Honestly, I just can’t