When I was a child growing up on the French South Pacific island of New Caledonia (my book “French Sand” is set there), the ancient Gaul leader, Vercingetorix, was the subject of a history lesson one day at school.

I have never liked the Romans because of what they did to him – much to my mother’s distress, as she was a classicist, a scholar of Roman history and a professor of Latin. How can you not admire the Romans ?! she would exclaim in exasperation.

Because they were rotten to Vercingetorix.  Quite a logical answer if one is fourteen years old.

Vercingetorix was a cheiftan in Gaul during the time of Julius Ceasar’s Gallic Wars.  At that time Gaul was divided in to many little areas, each with its own chief. Vercingetorix, who was from Arvenis (now the Auverge) united the chieftans in a fight against the Romans.  The chieftans, in turn, made him King.  He won an outstanding victory in 52 BC against the Romans at the Battle of Gergovia but, later the same year, lost at the Battle of Alesia  and was captured.

He was kept in a small wooden cage for five years and paraded through the streets of Rome before his execution.  What little information we have about him comes from Julius Ceasar’s account of the Gallic Wars, and what statues and illustrations we have of him are, of course, fictive.  But he stikes an enigmatic pose, doesn’t he ?  Looks good.  I think it was a picture of him, squatting like an animal in his little cage, that I saw in a history book, and quite possibly a figment of the illustrator’s imagination, that made me always dislike the Romans … 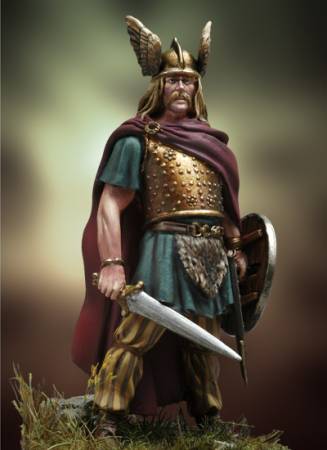