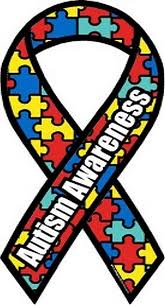 Yesterday I had the pleasure of interviewing the older brother of an autistic 14 year old girl.  I had been asked to write a series of  ‘Coping with Life Articles’ and decided to start with a family that I know well.  The older brother, Josh, is 25 and when Suzy, his little sister, was born he was 11.

“I first noticed that there was something very wrong, when Suzy was about 3 years old.  I got up in the middle of the night to find her running round and round the dining table in frenzied circles, while my mother patiently tried to get her back to bed.  The scene has always stuck in my mind, and I can picture it as clearly as though it were half an hour ago, a toddler in pyjamas running round and round like a small trapped creature.

To this point Suzy had just been one of those babies that seemed to be forever crying.  I know now that my mother, from the first stages of pregnancy, sensed there was something wrong.  My older brother and I had been straightforward babies and toddlers with all the usual ups and downs that accompany them.  Suzy right from the word go was completely different.

Memories of her as a small child are filled with traumatic scenes of trying to relate to a little sister who was unable to relate to me.  My dreams, and my older brother’s dreams, of a sweet little sister to molly-coddle were utterly thwarted.  We had instead a furious, yelling creature whose spurts of noise were intersected with long periods of stoney silence while she rocked herself back and forth between the sides of the doorframe or similar.

Now, at 14 years old, Suzy has learnt social skills that only her immediate family can understand.  She cannot apply her mind to anything if it doesn’t interest her, but when she is interested in something she will obsess on it.  She has a collection of Barbie dolls with all their accompanying ‘accoutrements’ and these will occupy her, with an almost manic intensity, for hours on end.  Unlike most girls of her age she has no interest in clothes or make-up and does not recognise her body as something that she needs to cover up when appropriate.  Puberty has made the situation vastly worse because although she has the body of a 14 year old, she has the mind of a 9 year old.

Conversely, she does quite well at school, is good at languages and intricate art work.  She is miserably teased in some situations and goes through patches where she will scream and kick rather than get in the car to go to school.  There are also patches where another girl befriends her for a while (it never lasts long) and Suzy is happy.

Now as adulthood approaches my biggest concern for my little sister is her inability to cope in a social situation.  She is terrified of strangers and falls apart when she simply just has to say hello to someone.  With friends and family that she does know, she will suddenly chime in to a conversation, usually very loudly, and at the most inappropriate moment.  I don’t know what the future holds for her.”

Autism is a mental condition present from early childhood.  Victims have great difficulty in communicating and forming relationships.  They have high anxiety levels and are easily confused.  They come across as though they feel no emotion, but this is not yet properly understood.  Autism does not necessarily mean learning difficulties, though it is often associated with such.  Perhaps the saddest part is that it is such a lonely syndrome that is little understood and that pushes most people away.

Click here for extract from “Saying Nothing” (novel set in Spain)