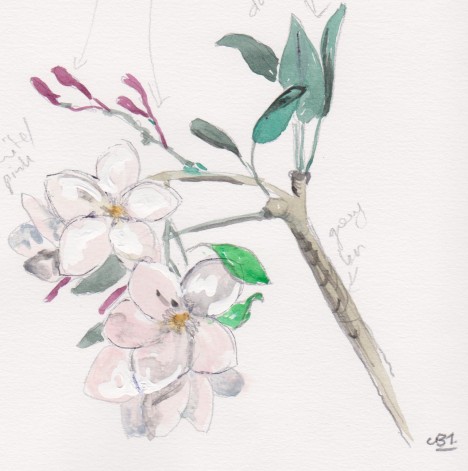 I have fond memories of playing, with my little sister, in a frangi-pangi tree in Nigeria when I was a little girl.  The tree was in the middle of the front lawn of our house in Ibadan, and my sister and I played – incredibly – “house” in the tree.

I suppose the tree must have been a good size, for we were aged something around 7 and 8, and we found areas of the tree that were the bedroom, or the kitchen and so on.  We wore just knickers – my mother had made them, blue and white striped knickers with little roses in the stripes.  They had a wide frill of the same fabric around the edge of the leg. There were several pairs of them.  Looking back on it, I suppose my mother made them as something easy to replace, easy to wash and, although they weren’t shorts, they were not quite knickers either.  We were always barefoot.  We used to arrange the frangi-pangi in our hair and around the waist-band of our knickers.

We went to school, of course, driven there in a Landrover by a Nigerian called “driver”.  We thought that was his name.  I don’t remember anything about him except that he took us to school, along with my big brother, and then fetched us again when, as soon as we were home, we stripped off our school clothes and climbed in to the frangi-pangi tree.

The house was big with a wide shadey terrace running all around it.  We had a houseboy called Difon and a cook and a “gardener” – I use inverted commas because the garden was really just a dust bowl with a frangi-pangi tree.  The cook’s children often used to play with us.  We also had an English nanny called Valerie, who we all loved very much, even though we got spanked for using her make up.

At some stage another little sister appeared.  It seemed she was bright red.   She was seven years younger, and quite an oddity, bundled in a huge white nappy, and lying either in my mother’s arms or in a cot that seemed much too big for her.

One day there was a snake weaving its way through the upright slats of the cot.  The baby lay silently.  My mother read.  My brother, sister and I watched the snake for a while and then one of us felt it a good idea to mention it to our mother.

“Mummy, there is a snake in the cot…”

My poor mother!  It was only many years later she mentioned to me how she hated Nigeria, and that after the snake incident she begged my father (who was a doctor of tropical disease) to return to South Africa.  Four years in Nigeria is enough for any white woman even in those days when it was “British”.

From there we went to Switzerland for a few years, and then to the South Pacific – that was wonderful, and forms the happiest part of my childhood memories.  Along with the frangi-pangi tree.

Click below to order your copy of “A Call from France”, voted a must-read for mothers of teenagers. Also available as an e-book – go to the home page and click on the icon.