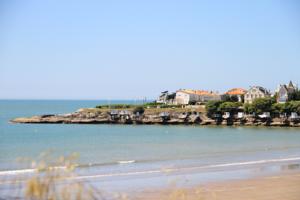 Royan is a holiday resort sitting on the Gironde Estuary, about half way down the Atlantic coast of France.  When we first came here, over twenty years ago, Royan was very much “an old folks’ town”, with a few elderly people enjoying the sun in the summer months and utterly devoid of any signs of life in the winter.

Nowadays, although it most certainly not my favourite town in the area, it is a lively and charismatic place all year round, with a very good selection of shops and restaurants, wonderful markets and huge sandy beaches.  People quite often rent our Chateau early in December in order to benefit from the excellent Christmas markets, the way only the French can do it,  in Royan.

Archaeologists have found cut flints in the area, so we know that there was a pre-historic settlement.  During Roman occupation, oysters were bred here, and vineyards planted.  Charentais wine used to be a bit mediocre,  but has improved massively in the last ten years – and the vines dates back many hundreds of years.  Royan then came under English control in the days of Eleanor of Aquitaine (when her husband became Henry II of England in 1154, her lands passed under English control) and to this day there are English surnames – Bell, Moore, Tyler – that are the legacy of English soldiers in the area. 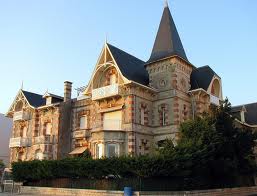 In 1789, shortly before the Revolution, this area of France was named Charente Inferieur, and it retained this name till the 1980s when, quite rightly, it was decided that the name was not very encouraging and, as tourism was vital, it was re-named Charente Maritime.  Much better !

During World War II the Germans occupied Royan and the surrounding area**.  Well after the liberation of France, the Germans held on grimly to the town.  Following information from the French General Larminat, who stated that there were only Germans and collaborators left, on 5th January 1945 the British RAF bombed heavily and all but flattened the whole place.  The job was finished in April by the Americans.  By this time Larminat realized his mistake and send an urgent message to the Americans – but in French.  The signalman, understandably, didn’t speak French.  Over 1500 French civilians were killed or wounded.

Most of the old buildings were destroyed, leaving today just a small selection of absolutely exquisite Napoleon III (Victorian in the British world) houses to one side of the sea front.  The neo-Gothic church was destroyed and when the town was re-built in the 1950s a new church was built.  Apparently it is a classified historical monument, the Notre Dame, but I’m afraid I can’t see it.  Looks more like a monstrosity to me. 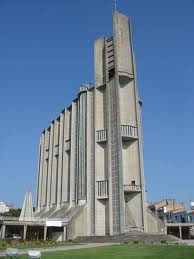 Interested in France ?  Book your holiday in the sunny Charente Maritime. Go to www.seasidefrance.com

** Germans also occupied our property, the Chateau de Rochebonne.  Come and spend a week or two !