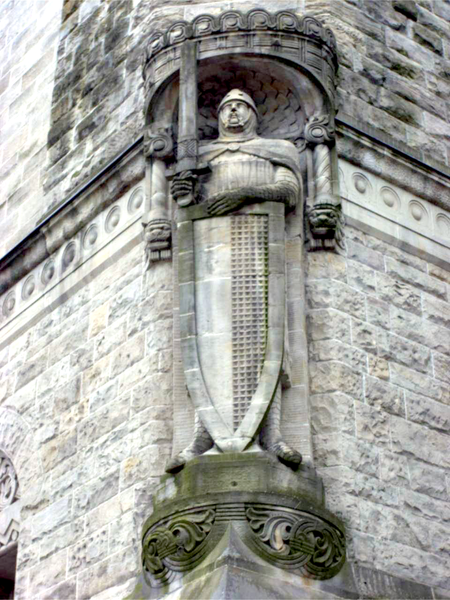 We used to live just outside Tonnay Boutonne, so I know it well.  It is (with the best will in the world) just a stoney village with a main road blasting through the middle of it.  I haven’t been for several years now and I have heard that it has been spruced-up and modernized, which is great.  Some of these villages have had by-passes built, which makes the place quieter but takes all the trade away.  Tonnay Boutonne boasts a pretty river, the Boutonne, an interesting old church and some pretty surrounding countryside.

Tonnay Boutonne’s main claim to fame (if it can be called fame) is that one Ganes de Ganelon ( 8th Century) was once Lord of it.  Never heard of him of course.  He was the chap who betrayed Roland, as in Roland and Charlemagne.  He was married to Isabelle de Taillefer, widow of the King Jean-sans-Terre, and her ghost is said to haunt the one remaining tower in the centre of the village.  She in turn was Countess of Taillebourg, another local village.

This is a statue of Roland, holding up his sword Durandel, built in to the corner of the railway building in Metz 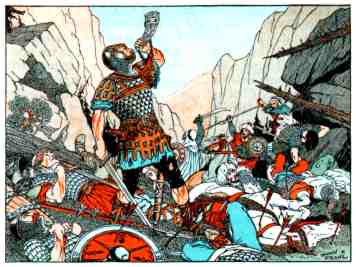 Comic strip – even today the subject enthralls youngsters.  Looking at the style and colouring of this, I’d say it dates from the 1960s or so.

Tonnay Boutonne has two stories as to the origin of its name.  The first is that the ancient Celtic word for tower was tom, and the ancient Celtic word for river was bou.  The second story dates to the days of Eleanor of Aquitaine (12th Century), when there was a large population of English in the area and they referred to the town as the town on the Boutonne, which over the years became Tonnay Boutonne.  The truth is undoubtedly a mixture of the two.

There are the remains of a chateau, mostly within the grounds of a private house.  It seems there were three towers with drawbridges and a moat, and that the place was more of a fortification than a village.  The remains of the Chateau have been dated to the 8th Century, but the one remaining tower, in perfect order, seems to be several hundred years later.  Perhaps it was re-built.

Now, Roland is a vastly more interesting subject, even though he never went (as far as I know) to Tonnay Boutonne.   During medeival years there was a great culture for highly romanticized and embellished “true stories”, and La Chanson de Roland appears in a 12th Century Oxford manuscript, telling the story of Roland, nephew of Charlemagne and Defender of the Frontiers.  He and his army were betrayed by Ganelon in Iberia at the battle of Roncevaux, where they were ambushed and every last man slaughtered.  According to the legend, Roland had a horn ( called an olifant, which was a special message-horn) to blow if he needed back-up, which, with his dying breath he managed to blow, and Charlemagne and army came dashing to the rescue, arriving too late. 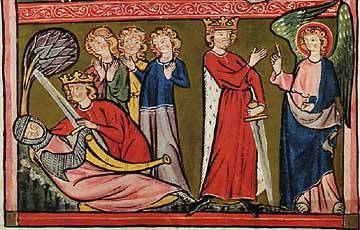 Medeival illumination: King Charlemagne rushes to Roland’s side.  Roland still manages to hold his sword, and has just blown his horn. Behind them women grieve. To the far right an angel assures Charlemagne that Roland will go to Heaven.

Roland also had a horse by the name of Veillantif and a sword that no other man could weild, by the name of Durandel.  These stories, and various versions of them, appear in medeival writings in Norway, Italy and Spain, as well as in England and France.  However, the one and only historic and accurate mention of Roland is in Charlemagne’s 8th Century “biography” (Einhart), where it is stated that Roland, nephew to the king and prefect of all frontiers, was killed at Roncevaux in the year 778 AD.

What happened to Ganelon ?  Oh, I think Charlemagne killed him, which is why his wife’s ghost forever haunts the tower ….