The English in France. Part 3. Driving through Italy. 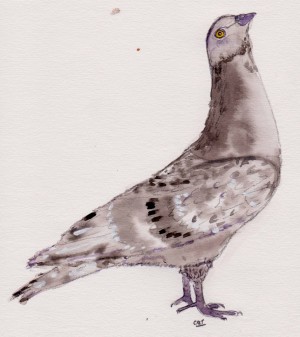 Venice was full of pigeons!  It did make me laugh so much because in St Marc’s Square there were vast crowds of tourists, largely Oriental or American, though plenty from all over the world, and they were taking photos of the pigeons!  It seemed to me such an odd thing to bother photgraphing in a city like Venice.  I didn’t do this sketch inVenice – it was for something different at a different time …

We spent that first night parked in a car park outside a restaurant somewhere near Cuneo.  The restaurant owner didn’t mind, not least because we bought a big (and delicious) dinner and plenty of wine.  It was situated in a quiet village just off the main road, and if there was traffic to disturb us during the night, we didn’t notice it.  We left very early, just after first light, and made our way back through the countryside where the morning light seeped up from the east, heralding another fine sunny day.

Bruce was feeling well.  I watched him carefully.  An attack was usually heralded by a greenish hue around his temples.  But he seemed fine, his big hands on the steering wheel, listening to me chatting away and occasionally calling out “all right George?”

We cut across the countryside to Alba and then to Alessandria, which got us on to the motorway to Verona, Padova and then Venice.  The countryside was lovely, brilliant and green and undulating.  I sat in the passenger seat with my Italian phrase book, loudly trying out words and gesturing in true Italian fashion.  I am quite good at mimicking accents.  In fact, I’d say it is part of the key to learning a foreign language.

“Avanti!” I cried to Bruce pointing, as lushiously as I could, to the road ahead. 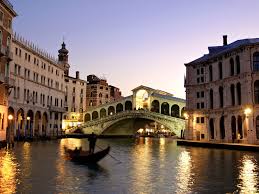 The Bridge of Sighs (Ponte dei Sospiri) was given its name by Lord Byron, the English romantic poet, in the 19th Century.  The idea was that prisoners on their way to prison or to execution would glance through the windows as they crossed the bridge, and sigh.  The bridge connects the prison to the interrogation room in the Doge’s Palace.   It (the bridge) was built in 1602 by Antonio Contini, at which time random executions, torture and inquisitions had been largely abandoned.  In reality the prison houses petty criminals, and has done for many hundreds of years.

On a different caravan trip we drove down through Italy – Florence, Rome, Naples, Bari, Catanzaro,Sicily and then back via Sardinia and Corsica.  In fact I came a-cropper with some Italian phrases on the other trip ( http://turquoisemoon.co.uk/blog/learning-italian-the-hard-way/).

On this trip, however, we spent four or five days in a campsite just outside Venice and then headed on for the border in to Slovenia.  We had both been to Venice before, though neither of us had ever seen it so crowded.  It was packed, and terribly hot.  Everywhere – but everywhere – were nasty stalls selling nasty things – mostly masks and plastic bits of this and that.  No where near as bad as Piza (a different trip again), which was horrific, but nasty all the same.  The gondolas were in traffic jams and it wasn’t worth going for a ride on one just to sit in sweltering and noisy a gondola queue under a bridge. 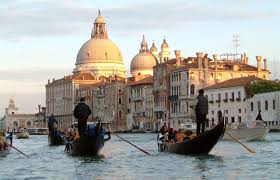 The romantic notion of a gondola ride along the canals of Venice is a nonsense most of the time these days.  We were there at the end of September but there were still huge crowds, gondola-jams, queues and hecklers.  It was a shame.  Venice is stunningly beautiful, and we spent our four days walking around and taking in the sights – although we had seen them before – and it is a shame it has allowed itself to become so commercialized.  Perhaps it is better at a different time of year?

We always had the same roles when we were packing up to leave – Bruce did the BOY jobs and I did the GIRL ones.  So, checking tyre pressure, oil etc., fell into Bruce’s category, along with emptying the WC (if we had used it, which was not often), emptying most of the water (because it was so heavy), packing away chairs and tables, parasols and hose pipes, lifting heavy stuff like bikes and tool boxes and so on … whereas I did things like putting stuff away in the caravan (and isn’t it amazing how much stuff needs to be put away ?  Where did it all come from for goodness’ sake?) and all the general tidying and sorting ready for the ride.  Bruce almost always walked George too, and this gave me a quiet time to sit and sketch, work on my book  “French Sand” and just have silence.  George, duly walked, would lollop clumsily up in to the back of the car, lie down on his mattress and wait for us to set off.  We always left a large bowl with some water in it for him, and he somehow never knocked the thing over despite many miles of twisting turns on mountain passes, and George himself doing twisting turns, all huge Great Dane of him, almost bent double in the back – which was his signal that he needed to be let out.  And as he was an elderly gent, if he needed to be let out it was – well – like – NOW. 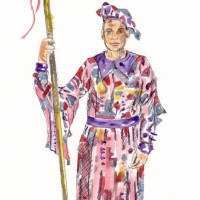 Sketch done in Venice that year

Of course, I had to look at e-mails every day, several times a day.  When somebody makes an enquiry to book a cottage or the Chateau (http://www.seasidefrance.com/) I had to answer as quickly as possible.  Competition is great and, although our properties offer a different and far better deal than most, people don’t necessarily know that.  I had a blackberry and was able to do quite a lot on that, but often enough I had to find an internet cafe (this was 2005) and sit down with booking forms and charts for an hour or two at a stretch.  Nowadays you get an annoying message pop up saying “you haven’t logged in from here before” and you then have to verify your account – and that is something I find terribly irritating, but I suppose it is all security.  Anyway, nowadays I have one of those sit-up lap-toppy things, whatever they’re called, so it doesn’t matter.  In those days, however, I can tell you – I have checked my e-mails in little back streets in Istanbul, in noisy cafes in Athens, silent hotels in Albania, crowded youth-music-smell-of-marujuana places and everything in between, and in almost every country in the world.  A few years ago I got an e-mail from somebody who was organizing a safari in Africa for us and she said “sorry I haven’t been in touch – I have been away” … but I always ALWAYS checked my e-mails, no matter where I was.

It was fine.  It can’t be bad, I said to Bruce, taking bookings and earning money while we set off on a caravanning tour. 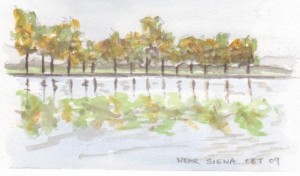 One of my Italy sketches.

So, on the fifth day we left Venice and headed for the border.  We stayed on the motorway.  There were several reasons for this.  One was that we had both been to Italy three or four times before and, while there are vast quantities of Italy to explore always, we wanted to get somewhere different.  The aim was to drive to Cyprus, after all.  And Cyprus was a long way away.  Also, fuel consumption is better on a motorway – though this is counteracted by expensive tolls – and finally, Meniere’s.  We had to be careful all the time to do nothing that could trigger an attack: driving round winding mountains roads was not good.