Part 4. The English in France:Caravanning in Croatia 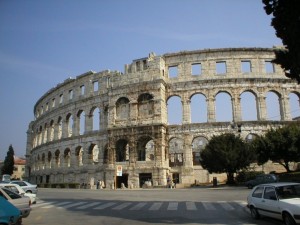 The Roman amphitheatre at Pula was built sometime around 45 AD.  Pula is the largest town on the Istrean peninsular and even in Roman times, when it was an important port, it had a population of over 30 000.  It was conquered under Julius Ceasar in about 45 BC and remained under Roman rule for over three hundred years.

Fearful that the glorious weather could turn, we skipped quickly through Slovenia and headed south towards the Istrean Peninsula.  The sun had followed us faithfully, and showed no signs of slackening off but it was, after all, late September and the trees were turning that golden-brown-orange-yellow that is so gorgeous for such a short while.  Mornings and evenings were chilly.

We took the motorway past Gorizia, and then scooted back over the border in to Italy, and finally crossed in to Croatia just south of Trieste, thus more-or-less following the coast round the Gulf of Venice.  This was not the first time we had been to Croatia, though I had never been to the Istrean Peninsular.  Bruce started to regale me with tales about the girl he was with the last time he had been, but soon twigged that I perhaps didn’t particularly wanted to hear.  We left the motorway and followed the coastal road down.  Glimpses of an irised sea peeked temptingly through trees; it was hot and that water looked so refreshing, even in our air-conditioned car.  George lollopped his head over the back seat and made little gruffy noises, which meant “I take it we will stop soon ?   Seen the sea ?  I mean seen the sea ???”

People didn’t show any interest in our huge rig, because there are campsites dotted all along the western coast (and the eastern probably), and campers were a regular sight.   Ever sensitive to old George’s feelings, we walked him along the cliffs for a while somewhere near Novigrad.  He was furious there was no real beach.  If there was one thing that dog liked, right in to old age, it was a good beach.

To my consternation I found that neither French nor Spanish, let alone Spanishified Italian, was of much use.  German was a better bet.  I can only say about 20 phrases and perhaps 100 words in German , which would not get us far, but sufficient people spoke English, certainly in campsites.  I wished I had a Croatian phrase book. 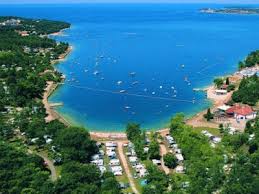 There is a disarming beauty to Istrea.  Although the coastline is dotted with umpteen campsites and hotels, it has retained its quaint cliff-hugging villages and stone-built towns with their spear-like church spires.  Although it is essentially a tourist desitnation that is extremely popular among Germans, Austrians and Slovenians, there is – so far! – none of the ghastly tack that usually characterises a tourist hot-spot.

We found a campsite near Porec (pronounced porridge, near as damn it).  We pitched tent – or caravan, as the case may be – at the edge of a cliff overlooking stunning vistas over the Adriatic.  Funny how the sea is hypnotic, isn’t it ?  I sketched a great deal, and sat and stared out to the horizon, and enjoyed the quiet shade under acacia trees till Bruce, promptly at drink o’clock (6.00) handed me a glass of red wine.

The heat was heavy, tempered by the slightest hint of a sea breeze, and that night was the biggest electric storm I have ever ever been in.  Braving wind and rain and thunder and lightening and every night danger available, Bruce got up and went out to George.

“Would you like to come in to the caravan?” he asked.

George looked puzzled but didn’t seem to want to move.

“He doesn’t want to come in,” Bruce announced when, soggy and cold, he climbed back in to bed.

I waited a while, listening to the furies of the storm right overhead.  Some of the crashes were so huge the caravan wobbled like a jelly.   George must be terrified, I thought.  Bruce was asleep again, so I got up and made my way out to the car.  The flashes of lightening turned the dark wet night in to over-exposed daylight for a few seconds, and I had an odd sensation of being watched.  I clambered in to the car and leant over to George on his mattress in the back.  He sighed.

He sighed again and put one paw over his nose.

And I went back to bed. 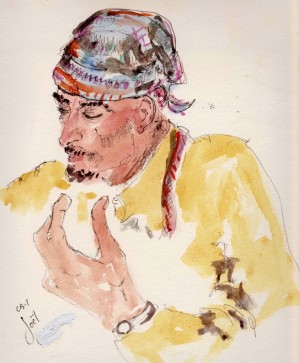 street artist in Pula.  I asked him his name and he said something that sounded like “Joel”, though that probably wasn’t it at all.

The following day we drove, once again in bright sunlight, in to Pula, where I bought an excruciatingly expensive pair of pale turquoise walking boots.  I needed something to really support my feet and my ankles, as I have always suffered from aching legs and hoped good support would help – which it did for a while.  I wore those boots all over Europe and and many countries since, and they are still as good as new.

We visited the Roman amphitheatre.  We decided to hire ear phones and, having installed them over our ears, we started on our tour.  Turn left said a voice which sounded slightly like Hyacinth from that TV comedy.  We turned left and made our way along a narrow well-trodden path between ancient pillars.  Hyacinth directed us past old stone benches, chatting as we went, and telling us which seats were which.  The trouble with ear phones is that unless you follow exactly what the commentator is saying at that precise moment, you rapidly lose the thread, and soon enough she appeared to be telling us something about an important arch when in fact my eyes and brain had gone off to some terracota urns on display to one side.  Anyway Hyacinth rabbitted on and soon explained about Julius Ceasar and the importance of Pula as a Roman port, her voice with a sort-of encouraging tone to it .  Then she directed us towards where the menagerie used to be. There was the sound of horses neighing seeping through the wires to my ears.  Goodness.  Lions were kept here, said Hyacinth.  Roar !   Rooaaaarrrrr !!!!!!!!!   The sound of lions filled our ears.  Gracious.  Hyacinth waited for the lions to stop and then continued with her recital and took us to where, she explained, there were once fountains. Tinkle-tinkle-splash-splash … and the sound of water filled the headphones.  I fully expected to hear a flush go.