The English in France, Part 2. Hitting the road. 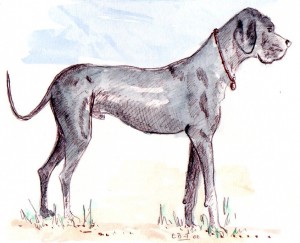 An early sketch of George. I didn’t catch the size of him at all.  I’ve forgotten what he weighed now, but it was something like 70 kgs – over 10 stone.  He was extremely intelligent, as Great Danes are, exceptionally obedient.  We didn’t even need to put him on a lead once he’d got past the silly I’m-a-puppy-I’m-gonna-run-after-it stage.  When we walked around, people would exclaim at the size of him and sometimes ask if they could pat him.  He was always very good-natured but considered the car his own property and would bare his teeth quite nastily if anybody other than us or the children approached.

We blew hot and cold about whether or not to set off.  Bruce had been so unwell that I was concerned about driving that huge rig and looking after him and an old dog.  But he seemed generally better and was getting up most days now.  He felt he would be able to drive small distances and we both felt that the trip would do him good.

We waited.  He went through a bad patch.  We can’t go, we said.  He seemed better.  OK, we’re off, we said.  Weeks slipped by and the summer holiday lettings finished. We closed the gites for the winter and moved from our barn, which was just a tad chilly in the mornings now, back in to the chateau.  It was still very hot during the day, however,  and it was difficult to imagine another bleak winter looming up.  We peered at maps and atlases.  We traced routes across France and in to Italy.  We talked about nothing else. 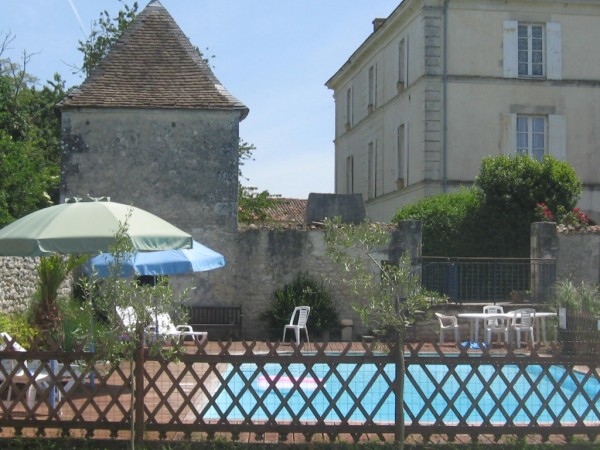 We discovered that the dizziness Bruce suffered eased considerably if he was swimming, which he did almost every day if he was up to it that summer.  We told the Meniere’s Society about it and I wonder if anybody else has benefited from that as a therapy …  (For more about this property go to http://www.seasidefrance.com)

On good days Bruce altered a few things in the caravan – well, a lot of things, actually.  He installed a hot water system (which we never used!) and a microwave.  He widened the bed to accommodate proper mattresses.  He sorted hose pipes and electrics, a heater, a larger fridge, the WC … and at last it seemed he was feeling better more frequently than he was feeling ill and, excitedly, we packed.  We took a minimum of belongings, and I have stuck to that rule ever since – two things to wear if it is hot, two for if it is cold and two if it is medium.  The bulk of our equipment was tools in case of a breakdown (little did we know what was to happen – that’ll be in about Part 8 I expect) and the things we needed for life to be comfortable – table and chairs, parasol and that sort of thing. If we were short of anything, we would buy it.

It was a very hot day, the day we set off, towards the end of September.  That gorgeous weather followed us for months.  Henri and Edith waved goodbye and we knew we left the property in good hands.  George lay down on his mattress in the back of the car and slept.  As long as he was coming too, he really didn’t mind.  He could still get in and out of the car by himself and still loved a walk – would even run a few steps if he was on a beach.  He ate well and seemed happy enough.  He was stiff, but not in pain.  We had him checked over by the vet before we left, who declared “c’est un veillard” – he is an old man. 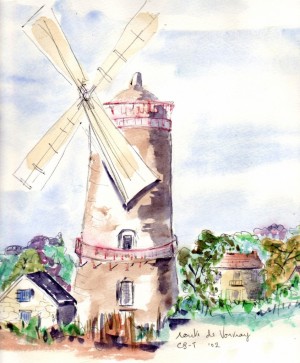 Sketch of a windmill, done during that first week away.

However, even in a big caravan like ours there really was not enough room for a Great Dane.  Poor old boy.  He so wanted to come in with us at first, and we had to leave the upper half of the caravan door open (it was one of those split affairs) and reverse the car right up to the door, the boot open,  so that he was virtually in with us.  He seemed happy with that.  We had no fear of leaving the back of the car unlocked because nobody in their right mind would approach a huge dog they don’t know, and George had a magnificent – and utterly terrifying – growl.  He was able to get out and do his doings if he needed to during the night, right by the car because he knew he had to STAY.  He’d look a bit mournful about it in the morning and seemed to breathe a sigh of relief when Bruce cleared it up with no ticking-off.

We motored down through France, stopping regularly.  I was all right if I could drive in a straight line, but manoeuvring that huge rig, sometimes in to the tightest spots, was only for an expert like Bruce.  We both wanted to get out of France as quickly as we sensibly could – not, I hasten to add, because we didn’t want to be in France, but because we were both eager to get gone, as it were, to start on our adventure. 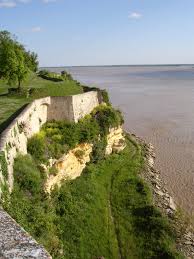 Blaye.  There are a lot of fortifications all along the coast here, built in the 17th and 18th centuries to keep the English out.  Fair enough!

We spent the first night near Blaye, barely an hour’s drive away. We reached it by 10.00 that morning but couldn’t go any further.  We talked about turning back and instantly decided against it.  We had a good medical insurance, and Bruce seemed happier than he had in ages.  We went for a gentle walk, tried to relax.  I am not accustomed to sitting around.  During that afternoon of waiting for the dizziness and nausea to abate I started on my second book “French Sand” (“A Call from France” was by now published); I sketched, I did patchwork, I wished I could knit.

The second day we were up bright and perky and made it as far as Avignon, with several stops en route.  It was slow going but it was fine – we were not in a rush … we had months! 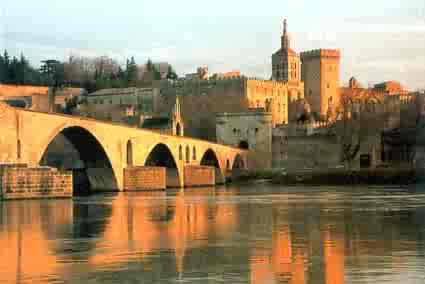 Avignon is the largest city in the Vaucluse in the south-east of France. It is often referred to as the City of Popes because it was the home of the popes for over 100 years, from 1309 to 1423.  It is a UNESCO World Heritage Site, well worth a visit.

A slow and careful start in the morning, tasking it easy, taking our time, making sure everything was pleasant and stress-free, brought us to the Italian border during the next afternoon.  It was only once we had crossed the broder in to Italy that we felt our adventure had started.

With us we had an Italian phrase book, a big map where I marked in fluorescent pen the route we had taken, and a book from the UK caravan club.  This book told where most – though not all – campsites were.  The details in the book depend, of course, on feed-back from campers.  I always think it is really unkind to submit a bad report just because it didn’t suit you; and a bad report written a year earlier and published in the book does not mean that the camp site is no good.  If we feel very strongly about a place being bad, we should write to the owner and tell him, but to have it published where it cannot be changed no matter how much the owner tries to improve things, is really very unfair.

Anyway, that first night in Italy, somewhere near St Remo, we pulled in to what seemed like a very nice camp site.  There was a sign at the gate saying “NO DOGS”.  This problem had never occurred to either of us.  Lie down, I told George.  He always stood up, somewhat clumsily, in the back if he thought we were stopping somewhere.  He lay down and put a paw over his eyes.  Don’t move, I told him.  Surely they won’t mind a nice old dog like George ?

“We don’t take dogs,” said the man at reception.

“We didn’t know,” I explained as rapidly as I could, tripping over my words as I ploughed forwards, “and he is very good very good and quiet and my husband is sick and we need to settle for the night supper and stuff and we cannot drive any further and it is getting dark and I need a drink and I have to walk old George no no no I won’t walk him I’ll keep him in the caravan the car …”

“He’s only a Great Dane … ” I pleaded stupidly, as though the man might suddenly exclaim “Oh!  Thank goodness you said !  Great Danes are welcome!”