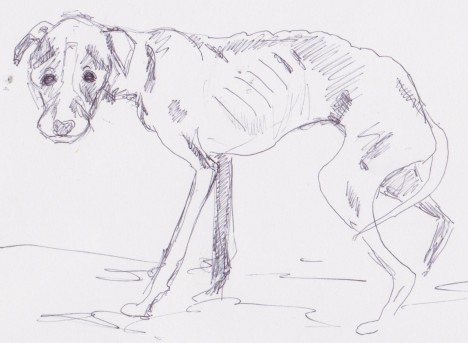 An item on Facebook a week or so ago made me remember a rescued dog I had when I lived in Spain.

Actually, I had several dogs, all rescued, three cats, a goat, a rabbit and an owl.

The first dog I named Kingston, because I had been living in Kingston, Surrey.  I fished him out of a box that had been weighted with stones, ready to be thrown in to the sea.  There were four or five puppies in the box, and the fisherman in question was stunned when I said I’d take once of the puppies.  I had never had a dog before and wasn’t at all sure what to do with the creature, but I got him neutered, vaccinated, fed him up, and he grew to be very faithful, obedient and a good friend.  He got run over and killed on a busy road some four years later.

Quite soon after this my boyfriend of the time found a dog lying in a gutter at the bus stop.  He picked her up and brought her home.  I named her Ketta.  No reason.  I just decided that was a good name. I got her speyed, vaccinated, fed her up – and she was the soppiest, silliest girl you’ve ever seen.  She got poisoned some three years later, and died.

My first cat was a tiny tortoiseshell kitten in need of a home.  I called her Kiss-Kiss.  She was an excellent cat, so clever.  I got her speyed but – stupidly – not before she had produced one litter of kittens.  We had all but two of the kittens put down as quickly as possible, and named the other two Katmandon’t and Khubla-Can’t.  D’you get it ?  They were both toms and, once neutered, grew huge.  Huge and noisy.  Deary me.

Then along came Kilo.  He had been rescued by an English neighbour and, as she already had seventeen dogs, she palmed Kilo off on me.  There was Koat, the goat, and Kowl the owl too.  Kowl didn’t last long, though Koat and Kilo and the kats were still alive and well when I left Spain and the boyfriend behind.

The last one was Kahrim.  I picked her up in north Africa and carried her in my car back in to Spain.  She was in a pretty miserable state.  I had intended nursing her back in to health as I had the others … but Time was Up.  The boyfriend needed to be dumped, Spain needed to be left, and the only sensible thing to do with poor Kahrim was to have her put down.  So I did.