Oxfam – this sort of thing makes me so angry! 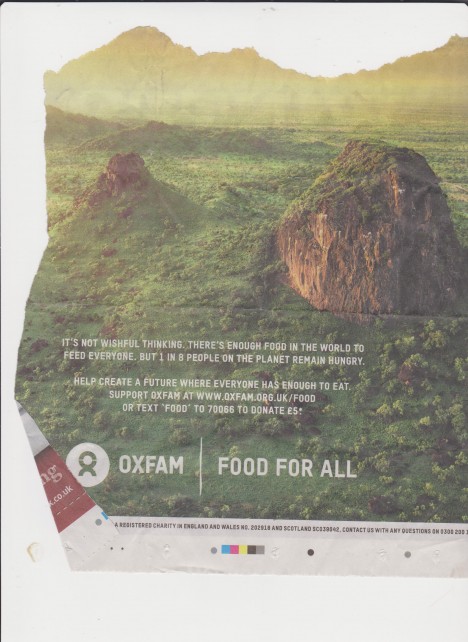 I don’t know if you can see it clearly ?   I tore it out of a newspaper.  It is an expensive ad by Oxfam (ads of this size in The Telegraph, the newspaper in question) cost around £5000/$7000) begging for you and me to send money in so that they can help the poor of Africa.

No.  The answer is NO.  We have sent billions, seriously billions, in aid to Africa over the past fifty years.  And nothing has changed.  The poor are still poor, the starving still starve, outside medical help is still needed at all levels, there is gang warfare, violence, rape, AIDS, disease, disease and disease.  In the last fifty years all our billions in aid have changed very very little for Africa.

Not only that but these vast quantities of money create political power struggles within the African countries in question, as they all compete to get their hands on the dosh.

This tells us something obvious: we are helping the wrong way.

The governments of these countries must be forced out of their apathy.  We must lobby them in any which way we can in to making them be responsible for their own people.  Most African governments do not rely on the votes of their people for power, so they couldn’t care less what the people think about them.  The people themselves, poor and illiterate, cannot lobby their own governments.  Not only that but in several situations they get killed or tortured if they step out of line.  That is where help is needed, not in the never-ending supply of food and medicine (which frequently gets stolen en route) that just goes on decade after decade.

The African continent has enough arable land to feed the entire world.

If I am to give any money to charities for Africa I will give only in to a system which encourages an entente between African countries, which creates a liason between the places with desert and the places with arable land.  It will take decades, and in the meantime children continue to starve, but it is the way forward and the only way we should be helping.