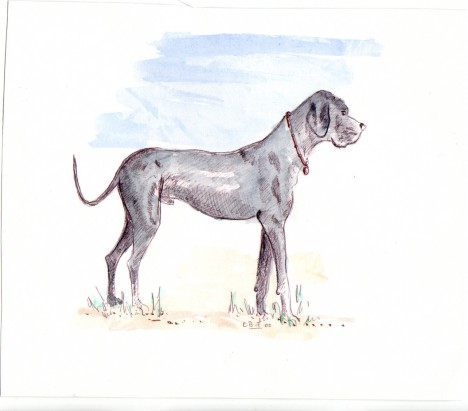 All the best people do it.

The trouble was he was such a bloomin’ Member of the Family, and we couldn’t leave him in

kennels.   We had only once tried that, when he was five or so, and because he growled a few times

(because he was upset at being left) the kennels lady wouldn’t go near him.  Well, George was huge.

Even bearing in mind that he was a ‘Dane, he was huge.   About 80 kilos.  And ‘Danes, although such

soppy things, as everybody knows, can look jolly frightening when bearing their teeth.  The result

was that poor George didn’t get walked or washed or even patted for a week.

That in turn meant that we had to take him to Istanbul with us.  He was almost twelve years old by

then.  Most ‘Danes live till they are seven or eight.   The plan had originally been for me and Bruce to

fly to Cyprus to see if we wanted to buy a small property in which to spend the winter months.  We

spend all summer in France, and that is great, and we spend time in the UK with the kids and

the Small People, but we needed somewhere for decent winter sunshine, as one does.

So we decided to drive.  We bought a huge old gippo caravan, hitched it on to the back of our

Chrysler Grand Voyageur – and off we went.

France, Italy, Slovenia, Croatia, Montenegro, Albania, Greece and then Turkey.   And then ferry to

Cyprus, by which time George had died.   Over ten thousand miles spread over five months.   We

returned, a hundred adventures later, without a Cypriot property and without old George.

Click below for “The Man with Green Fingers”, a novel set in Cyprus and a UK best-seller.