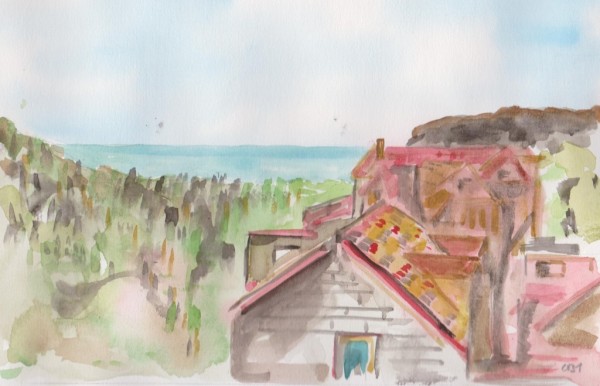 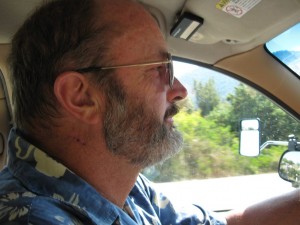 Having uploaded this photo, I think it must have been taken the following year because I can see the scar on Bruce’s neck where he had a cancerous somethingorother removed.   He did almost all the driving; we both preferred it that way.

Poor George hovered.  He was worried he had done something terribly wrong, yet knew he hadn’t.  He worried about it just in case.  Hedging his bets.  He wagged his old tail nervously and skittled between me and Bruce.  What’s wrong-wazza-matta-was it me?  he asked.

The Germans came rushing out of their caravans.  One couple had already gone to bed and were in pyjamas.  The others – the ones who had taken photos of George – were still dressed.

Bruce remained kneeling in the grass, one hand over his eye.  He had gone quiet now, but rocked himself slightly.  I tried to talk to him.

“I need a doctor urgently,” was all he said.  Then, “the bungie caught my eye …”

Such a handsome fella

Bruce is a big man.  Like all men he makes a silly fuss when he has a cold, but otherwise he is not one to complain.  I have seen him with nasty burns and big cuts, and he always makes light of it.  So I knew without having to ask that it was dreadful pain.  He is not one to think he is ill or injured when he is not, so when he said he needed a doctor I knew it was, like, now.

“Ein medico?” I tried in German.  “Medikus? Doctorum ?”  I had no idea how to say “doctor” in German but I knew the word for hospital.

“Krankenhaus!” I pleaded, “ich mochte ein krankenhaus!”    (Hospital, I want a hospital! Almost as though I thought a hospital could be delivered, like a pizza).

They seemed to understand and one of them dashed up the hill to where the campsite owner had a house.  Wildy I tried to ask anybody who would listen – but really there were only the two German couples there – if there was a doctor in the village.  Everybody stood around looking hopeless and worried.  One of the fraus tried to look at Bruce’s eye.  He wouldn’t remove his hand.  Well, unless you’re a doctor, and an eye specialist at that, there is truly no point in looking at his eye, I thought.

The caravan was still hitched to the car and anyway I had had too much vino to make driving safe, especially on these steep and narrow roads.  Dubrovnik, the closest place likely to have medical help, was about forty kilometres away up along the main road.  After what seemed an eternity the German reappeared accompanied by the wife of the campsite owner.  She was really cross.  Worse, she was tiddly.

“He is badly injured,” I said, “I need you to find somebody to take us to the hospital.”

“But who?” she asked, flinging out her hands.  “This is a small village!  There is no taxi, no doctor, nothing!”

“Please, just find somebody willing to drive us to the hospital.  Really really quickly.”

Poor George was by now beside himself.  The last thing we needed was a Great Dane going mad and getting in everybody’s way.  Furthermore, he could look quite frightening to people who didn’t know him, especially like that in the dark when you couldn’t see the gentle and weary old eyes.  One thing that could be said for that dog – well, many things could be said for that dog – he was extremely obedient.

“In to your bed, George,” I told him, and he clambered gracelessly, as old boys do, in to the back of the car and lay down. To his astonishment I put his lead on him and fixed the other end of it to a seat belt.  I put his blanket over him.

“You may have to wait here quite some time,” I said.

The Germans seemed to be telling me that they would look after George.  There was nothing else I could do.  I knew he would cause no trouble, but a huge dog like that …. and people who are not used to dogs, big or small …

After about five million years a young man appeared with a car.  His English was good and he explained he was the nephew of the campsite owner and that he had had nothing to drink.  We steered Bruce towards the car.  He had to sit in the front because, with his Meniere’s problem, he’d get very car sick if in the back.  Everybody kept trying to get him to lie down in the back and I found myself getting really annoyed and saying things like:

“Nein, nein!  Die back is nicht gud for my husband.  My husband krank in die back of dem auto!”

We got going.  The campsite owner – the wife – came too.  I tried to reassure Bruce.  He wouldn’t speak.  I put my hand on his shoulder and saw him  flinch fractionally, and remembered how it feels when you are in pain and somebody attempts a comforting gesture.  Any woman who has been through a long hard labour knows that feeling!

By the time we got to the hospital it was well after midnight.  The place seemed deserted, but the nephew scurried off and found a nurse who found another nurse and between us we got Bruce in to an emergency room.   One of the nurses looked at the eye and swung round immediately to the telephone.  The nephew explained that she had phoned the eye surgeon.  This didn’t bode well.  This really didn’t bode well.

I think at times like this a million thoughts whizz through your mind.  Great jumbled masses of scenarios and fears, possibilities, solutions, things to say or do or not say or do … it is the same for all of us.  For myself, I am a very practical person.  My brain instantly took on board the logistics of all this.  How long would I wait at the hospital and what about George?   I hadn’t locked the caravan or the car.  The health cover papers.  Bruce’s passport for admittance to the hospital.  Phone the children ?  No, wait to see how bad it is – or isn’t.  Get Bruce to a better hospital – he cannot go on a flight I assume – therefore this hospital is the best for hundreds of miles.  Move car and caravan closer to the hospital.

The nephew and the campsite woman said they would go home and gave me a phone number to call when I was ready.  I thanked them and they set off in to the dark.  I watched the headlights of their car scan a circle round the car park and then disappear down the road.  It had started to rain very slightly – damping my old nanny used to call it. I sat next to Bruce on the plastic bed, and waited. 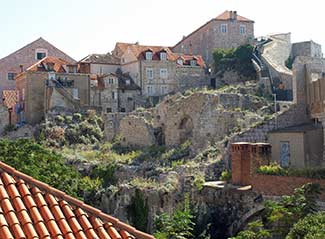 War-damaged houses to the west of Dubrovnik – archive photo.

Almost every roof in Dubrovnik had to be re-done after the war, and it has been beautifully done so that, although they are clearly new rooves, they blend in to the ancient city.  You can walk almost the entire way round.  We did have photos – several – of us in or near Dubrovnik, but I just cannot find them.

I will never forget that doctor.  She appeared about half an hour later.  She was one of the most beautiful women I had ever seen – but a lost beauty, a has-been beauty, a face that had seen dreadful suffering and been through a great deal of distress.  The Bosnian war had been over at least 10 years by then … I calculated … the doctor would have been perhaps a medical student at the time; Dubrovnik had been all but blasted off the face of the earth.  This woman had seen horrible, horrible things and had suffered hugely.

She looked at Bruce’s eye.  There was just a blood-filled bulge, protruding grostesquely.  A wave of nausea overwhelmed me and I had to step outside.   They admitted my poor Bruce to a ward and gave him something for the pain.  I was told to come back in the morning.  The doctor looked so weary.

“I will almost certainly have to remove the eye,” she said.