Part 5. The English in France: caravanning on the Adriatic coast. 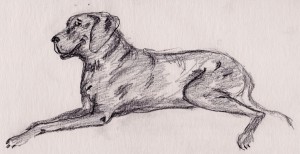 One of many attempts to sketch old George.  In old age, like most old folk, he spent a lot of time lying down or sitting waiting like this, his old tail giving the ground little thumps whenever we looked at him.

We stopped in Split overnight.  I had been to Split once before, years ago when I was at University, with a boyfriend.  We drove an old Triumph Herald convertible.  You don’t see old bangers like that any more.  We had driven down via Germany and Vienna as far as Dubrovnik, and then went home along that Adriatic coast road.  In those days the road was narrow and skirted the water’s edge for many miles.  Now it was a smart and wide road, dual carriageway in many places, with small roads leading off down to the sea.   We were nonetheless treated to spectacular views, and that part of the world has got to be one of the prettiest, spoilt only by a Croatian lack of understanding about litter … for there were many areas where there was a sad amount a litter, and that was a great shame. 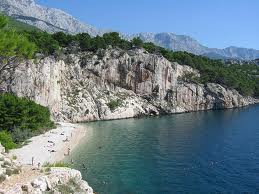 Every now and then we left the main road and drove down to the beach.  We had to always be very careful because our rig was so long, and on more than one occasion we were forced to unhitch the caravan, turn it round by hand (usually with the help of passing people), and then drive the car round the other way.  You need a huge turning circle for big rig like that.   On one occasion Bruce physically lifted a motorbike out of the way as it had parked right next to the nose of our car after we had gone to considerable trouble to park in such a way that we could drive out again.  Usually we were able to get out by turning left, then left and left again, in a circle (or right and right again of course), and we never once got truly stuck, though there were many times when George and I had to get out and walk if there was a bit of a hill and no run up to it.  Bruce is a brilliant driver and understands all about engines and what they can and cannot do. 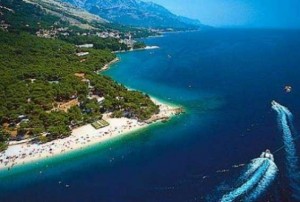 In Split our guide made a distasteful remark about Princess Diana – and I told him that Diana was dead and that it was rude and unkind of him to make such a comment, which earned me a small clap or two from the others present in the group.   Apart from that and a very poor luncheon, Split was nice, hot, crowded, and so very changed from the seedy little town I had visited in student days.

Bruce was feeling fine.  He had become almost totally deaf on the left, but as we had (and still have) a left-hand drive car, he was able to hear me from his right ear.  Whether or not that was an advantage to him is debatable for I love to chat, and as Bruce is not really very talkative, I chat away almost to myself, though a few times I chatted to the SatNav whose name was Rhoda – get it ?  Road – …?

The tinnitus was also almost constant and for that reason Bruce to this day likes to have a CD on in the car because it drowns out the sound of the ringing in his ears.  So it was sometimes me chatting, sometimes the CD, sometimes both , and Rhoda would have joined in had she been able to.

That greenish tinge around Bruce’s temples came and went, and he needed to lie down for an hour after lunch every day.  He’d go out like a light, the sort of exhausted sleep you see in people who have been ill, and he’d wake up as near to good as new as he’d ever get.   While he rested I worked on my book “French Sand” – though at that time is was called “Jacaranda”, which I still think is a better title.  I tried to sketch. Sometimes and I also worked on a huge patchwork quilt – the first of six I made.  I checked e-mails regularly and took bookings, keeping a record of everything in a large pink plastic box which I referred to as my desk.  The amazing weather continued. Life was good.  Bruce was so much better which in turn was great for me.  George was excellent and the car, caravan and overall trip working well. 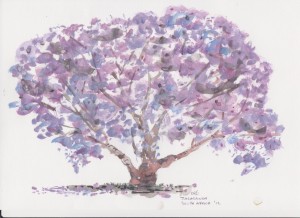 Jacaranda in the South Pacific, where “French Sand” is set.  I had lived there for almost four years.  “French Sand” has never really sold particularly well – unlike my others – and it seems the start of the story is slow, so people abandon it.  But those who persevere find it becomes quite gripping.  It is a nuisance because I was made to alter the start two or three times, and I’m sure it would have been better had it been left as originally intended.  An American woman posted a bad review as well, which is a very unkind thing to do and which is probably also why it has never sold well.  Honestly folks – if you have nothing nice to say, just say nothing!  Not just for books, but anything – hotels or restaurants.  People don’t realize the untold damage they can do to a small business.

We had been recommended a campsite virtually on the beach just 40 kms before Dubrovnik.  We were well aware that the road to it would be steep and narrow, as indeed it was, but it was do-able with some brilliant Bruce-style manoeuvering, to include one patch at the camp entrance where we were all but right in the water.  There was a nasty concrete edge which was all too easy to go over on such a narrow road – straight in to the sea a foot or so below.   An elderly German couple came out and, with quite a lot of shouting and calling out things like “achtung!” and “du lieber gott!”, helped us do a five-zillion point turn and eventually install the caravan in a nice spot. 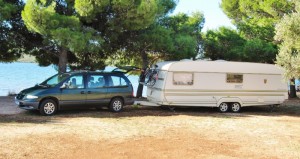 Just to remind you of the size of our rig.

We walked George along the shingle beach for a mile or so – he couldn’t do much more than that.  The Germans took photos of him.  There was just one other couple there, also German.  It was a small family-owned campsite with a very home-made feel to the showers and WCs … which I appreciated, having done such a lot of that kind of thing myself.  Everything was spotlessly clean, and there was plenty of hot water.  Excellent, we’ll stay several days, we decided.  We tried chatting to the Germans and I managed, with my limited vocabulary, to tell them that we were going to Cyprus via Turkey.

After supper I busied myself in the caravan, feeling a little tiddly after some excellent wine, and Bruce re-arranged stuff in the back of the car.  It was important to arrange things neatly, so that we always knew where anything and everything was at the drop of a hat.  Things had to be held down in to place with bungies so that they didn’t fall over on to George.  Bungies are nasty things.   Be careful when you stretch them over something to hold it down.  Really careful.  George watched.   Water lapped on the pebbles so close by, a lovely sound. It was a fine evening.  The sun had set and I put a cardigan on and called out to Bruce to see if he wanted a tisane before bed.

There was a dreadful cry.  I have often tried to describe it.  The cry of terrible pain.  Not the shrieking cry of a mother in labour (which is pretty painful, to say the least!) but a deep, short howl.  I stepped out to the car where Bruce had been sorting.  He was on his knees in the grass, one hand on his face; blood oozed through his fingers.