Part 12. Caravan trip in to Greece. 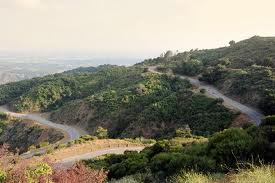 Lord knows, the broken road over the Albanian mountains had gone on and on hour after hour, and taken (as is always the case) longer than expected.  The car was thick with stone dust, as indeed was the caravan, and I felt that all my teeth had been rattled out of my head with the never-ending jarring.   George didn’t seem at all well.  At our last stop he had been sick and had had great difficulty clambering out of the back of the car, and even greater difficulty clambering back in.  He didn’t want to eat, though he did drink plenty of water and politely partook of luke-warm milky tea whenever we brewed up.  He tried to wag his tail when we spoke to him, but even that seemed an effort, and when we watched him lower his huge bulk down in to the grass we felt that his days were numbered …. 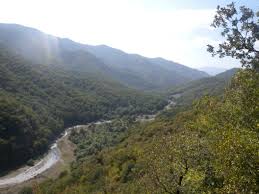 When the border in to Greece appeared, it was like magic.  We rounded a very steep downhill bend, one of those endless downward rolls that make you just have to trust the over-heated brakes, and suddenly, just as the road started to flatten, we were on tarmac.  The poor car didn’t know what had hit it.  Tarmac !  It was a miracle we hadn’t had punctures up there in the mountains with the wolves and the desolate landscape.

We rounded another bend – and there it was – a good hour before we expected it. The border !  The wonderful, blissful, delicious border in to Greece. Europe !

Goodness, I have travelled all over the world and been in and out of all sorts of odd situations in Africa and Central America, but there was something about Albania that had left me constantly on edge, laced with a hint of fear.  Something I just couldn’t put my finger on.  Something to do with menace.  Further north the mountains are called the Accursed Mountains, and perhaps that had something to do with it.  My relief was so great at finding ourselves at the border that I all but kissed the border guard.

George was such a totally excellent dog, irreplaceable

The nearest town was Ioannina.  Darkness had fallen and we were both incredibly tired.  Had we driven past somewhere to just pull in for the night we would have, but there was nothing, and we sped along the wonderful good road to Ioannina, eyes skinned for campsites or anything half way suitable all the way.

We arrived at the municipal campsite after midnight.  We simply drove in, almost blindly, and parked.  I heated up a tin of soup and buttered some bread while Bruce let down the jacks and unhitched the car.  George seemed to understand that we had stopped for the night, and was more willing to make the effort to go off and do his doings to one side (which we cleared up in the morning), and even ate a small amount of the moo-moo I had bought in the village the previous day (see Part 11).  It was mild and the sky was ablaze with zillions of stars, so we made up a bed for George on the grass next to the caravan, leaving the car open so that he could get in if he wanted to.  He knew that we were doing this for his sake, to save him having to clamber in and out again, and he nuzzled our legs gratefully and said his habitual hrumff.  He seemed so tired and so unwell that, had he not been such a terror for farting, as all the best old men are, we’d have allowed him in to the caravan with us. 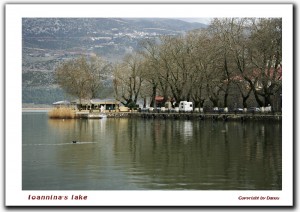 This is the lake of Ioannina, picture taken later in the winter it would seem, or perhaps very early spring – I see caravans there

In the morning when daylight broke, we discovered that we were just a matter of two or three feet away from a concrete edge straight in to a lake.

Three things needed seeing to first thing in the morning.  Bruce had to see a doctor, George had to see a vet and the car had to see a mechanic.  Despite not a word of Greek, and in an area where not a lot of English was spoken, we found all three fairly quickly.  The vet reassured us that, although George was very elderly, he was in no pain and was, infact, in extremely good condition for such an old dog.  Funny how one communicates in foreign languages.  The vet had about 20 words of English and 10 of German; I had about 20 words of German, and between us we worked out what was being said with no trouble.  Some kind of man-thing had to be done to the car, and that was quickly dealt with.  The doctor, who spoke a few words of French to add to his few words of German and English,  was more of a worry for he said there was no eye clinic in Ioannina and that he recommended Bruce go to the main eye hospital in Athens.  This was a bit of a blow, for we were very tired and needed to rest and, against the doctor’s advice, we decided to stay put for a few days.  All three of us needed it.  All five of us if you include the car and the caravan. 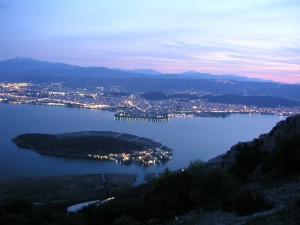 We had an exciting time with the 2 men who worked at the campsite coming to fisty-cuffs over to whom we should give the camping money, which was clearly simply going in their pockets. It was most interesting to watch them get angry with each other and yell things in Greek, and we solved the problem by giving them half each, a solution which they found extraordinarily clever.  I used the camp washing machine and got all George’s very smelly blankets washed, as well as out own stuff.  There were some fun moments with that too as one of the two same men wanted money for use of the washing machine when I had already put money in the slot … and so on … and I got on with writing “French Sand”  till, on the third day we hitched up and headed for Athens.  George was really annoyed.  Really really annoyed and refused to get in to the car till we threatened to leave him behind. 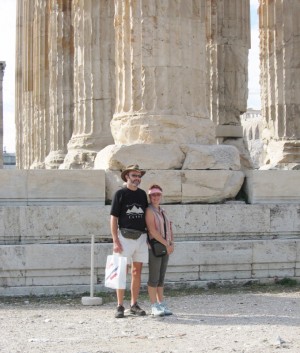 We had both been to Athens before, but nonetheless did a quick sprint round the Acropolis, despite George’s furious objections

I think Athens has changed recently, but at that time (2008) the centre of the city was one huge, noisy, dirty, bustly, noisy noisy noisy place.  The camp site was fine, and we located the eye clinic where there was a queue almost five million miles long.  It was at odd moments like this that I was aware that George was a burden in some ways.  I wanted to be with Bruce when the doctor examined him because he is deaf in one ear and frequently doesn’t catch what people are saying; add to this the Meniere’s problem and the huge language barrier – well, I wanted to be there.  But I had to keep nipping out to the car to check on George and spend a bit of time with him (I would sit in the back with him with my feet under  his ears, which he loved, and do Sudoku).

The doctor pronounced Bruce’s eye healing well and we headed south for the beach as fast as we sensibly could.  It was now five days since we had promised beach to George, and he was also five days older…. 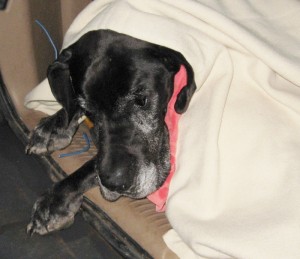 Catherine Broughton has travelled widely and her books (available from Amazon) reflect her travels.