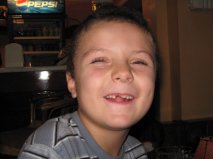 Our little grandson with a front tooth missing.  Even Istanbul fairies bring some money – did you know ?

We stayed in Greece for 6 weeks, and spent the greater part of the time in the campsite just outside Pylos in the very south.  We were parked virtually on the beach and George just couldn’t believe his luck.

Unable to walk far now, he nonetheless sauntered up and down by himself several times a day, and each morning Bruce would try to encourage him to go a little further, coaxing him on a few metres, and a few metres more, then back again.  Most of the time he lay on his blanket in the shade, eating very little, and he developped a few sores on his belly so that we had to take him to the vet.

As before, the vet reassured us that George was not in any pain. He too said that he was remarkably fit for such an old dog and that the sores were nothing but an old man’s ailments.  We dabbed at them with salty water or iodine, and I spent long hours sitting next to him with my toes up under his ears.

I spent my time working on a new book, one which in fact has since become my best-seller, “The Man with Green Fingers”.  The story is set mostly in Cyprus, though we didn’t hit Cyprus for another two months.  I tried to teach myself to draw, and Bruce tinkered with the car and the caravan.  If we felt George could be left we walked or cycled, but mostly we just sat and read or wrote or tinkered.  In Pylos we bought a new blanket for George but oddly enough he didn’t like it and preferred his old ones which, despite being washed, had all the right smells for him.

The warm weather continued.  It was a quiet time with the constant gentle lapping of waves on the shore and the gentle rustle of palms. 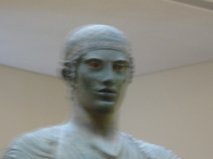 We visited Delphi and Corinth as we headed north several weeks later.  Dreadful thing to admit to, but one can get ruined-out and statued-out, and over the years we have seen so many ruins, works of art, cathedrals … 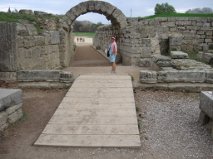 Me in … well, it was raining the day we were in Delphi, so I think this must be at Olympia … can’t remember. 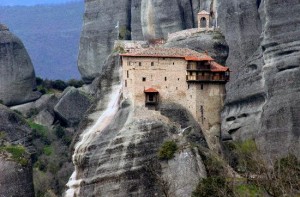 Meteora; now, there was an amazing place if ever I saw one!  The ridiculous lengths people used to go to in the name of Christianity – Jesus would be gob-smacked!

We headed north for Turkey, skirting up the west coast of southern Greece to Patra, inland to Corinth and then up towards Thessaloniki.  We took it slowly, and the route, once we hit the area on the west side was stunning.  There is a huge bay called, I think, Thermaikos, and we both commented that we could well imagine living there.  Water, still and glossed like a mirror, stretched out to meet the sky, and expensive-looking villas dotted the lush shore.

It was at some time before we reached Thessaloniki that I decided to phone the children about George.  Well, what had we expected ? He had done really well, and I’d even go so far as to say he had enjoyed the trip, but the very expression in his eyes told us that the end was near and it was foolish to hope he’d last much longer.   It was time to say goodbye, and we felt that George almost certainly wanted to see the children one last time … and they would want to see him too of course.

After several discussions back and forth Pippa booked flights to Istanbul for herself, our two grandbabies, Jake and his girlfriend.  William was travelling in India. 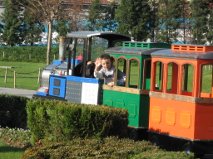 Our little grandson on a mini railway in Istanbul

Our arrival at the border in to Turkey was one of the most off-putting experiences I have ever had at a border – and our departure from Turkey two months later was even worse.  That arrival was so bad that, had we not arranged to meet the children in Istanbul, we’d have simply turned around and gone back.  It was bitterly cold and the guards were rude, inefficient, surly, frightening and robbed us of some 500 Turkish lira – about £150.

Istanbul, however, is wonderful!  Stunning.  Breathtaking.  It should be against the law to not visit. 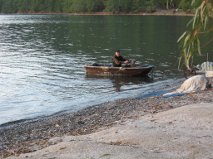 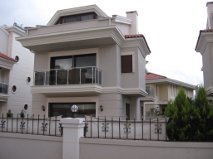 One of several houses we looked at with the idea of perhaps buying.  I’m glad we didn’t. 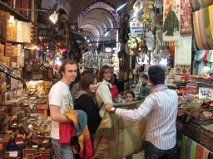 In the great market in Istanbul.  Pippa and I spent many hours tramping round there to find a thick foam mattress for George.

In the old part of Istanbul we located two flats, one next to the other.  Finding the flats was easy enough, but finding one that would take dogs was a different thing altogether.  Some Muslim cultures don’t touch animals, and also we needed somewhere with at least a big balcony for George, if nothing else.  Furthermore, it needed to be on the ground floor because he couldn’t cope with stairs any more. 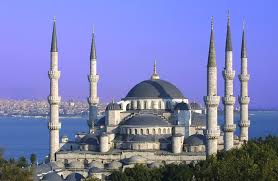 Amsterdam will always be my favourite city, but we all loved Istanbul.  It is a huge ecclectic place, with friendly people and a mixture of all races and cultures.  This was more-or-less the view from our balcony.

We located a place in a wonderful old house not far from the Blue Mosque, and the eight of us settled in, having left the car and caravan in a secure parking place on the outskirts of the city.  George was so pleased to see the children – so pleased.  He dragged his old frame up off the floor as soon as he heard their voices, wagged his old tail, nuzzled in to their bodies.  With his eyes he followed their every movement, his tail occasionally making a small thump on the floor, and put his head on their thighs when one sat down with him.  And that is where he died three days later, quietly, lying watching us as we pottered about getting a meal ready.  I bent down to stroke him, and he closed his eyes and died.

I never say how heartbreaking it is to lose a family pet.  I know people who have lost a child, and the loss of a family pet pales in to total insignificance by comparison.  Suffice to say that for several days I kept absent-mindedly starting to open the patio doors for George, or think about his food when I passed a butcher’s shop … little things that take a while to adjust to.  I won’t pretend I didn’t cry.  He is buried somewhere in Istanbul – Bruce and Jake dealt with that – I don’t know where and I don’t want to know.  And some ten days later the children flew home and we continued with our trip ….

Catherine Broughton is an author, an artist and a poet. Her books are on Amazon.