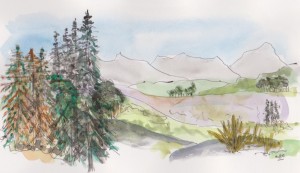 Progress through the mountains was slow.  The tortuous bends kept us alert and the breathtakingly lovely views kept us mesmerized.  The disgusting quantities of litter we had seen in the north of the country were not in evidence here, mostly because of lack of people I expect.  At the start of the uphill climb we went through a couple of tiny villages.  The road took us between houses and round excruciating bends, dodging children and dogs as we went, and accompanied by the quiet stare of women as they pegged out their washing.  Sometimes the road was so rough and so narrow that we became concerned we were accidently in somebody’s drive.

I asked an old man if this was indeed the road to Greece:

“Ya, ya,” he replied, flapping his hand towards the mountain, “sie gehen geradeaus.”

Why it should be that the Albanians spoke a little German, I have no idea.  Usually old folk speak no other language at all.  I could hardly say anything in German and that really annoyed me.  I could say “das ist ein schloss” (that is a castle) which was a fat lot of use, also “die schwimmbad ist fur die rechten seite” (the swimming pool is on the right).  Exactly the right sort of thing in Albania.  I had, however, understood geradeaus, which means straight on.  I had driven both Bruce and George mad in Italy by periodically shouting “avanti!” and pointing to the road ahead. To give them a break I had changed it to geradeaus after a while. 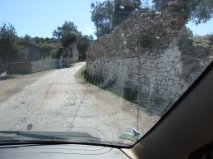 photo taken through the windscreen as we drove along

The old man was one of the last people we saw for many hours.   The road, mostly rough, wound on with sheer drops on one side and sweet-smelling moutain pines clamouring for space on the other.  Overhead a brilliant azure sky peered periodically through the foliage. It was lovely.  Lonely, slightly worrying in a sense I could not put a finger on, but lovely.  We stopped regularly to give Bruce’s eye a rest (there was no way I was going to drive on those roads) and to let George out.  George didn’t look too good.

“You’re tired of being in the car, aren’t you old boy?” Bruce asked him and fondled his ears.

We promised him that as soon as we got to a beach we would stop for at least a week, and he perked up considerably at that, even gave his tail a half-wag and shoved his nose in to the side of my leg.

I dug out the cold chicken left over from a previous meal and made a small salad.  Bruce was lying down in the shade and I carried our little picnic outside and set up the food and a thermos of tea on the blanket next to him.  George lollopped over and flopped heavily down next to me.   The past few days we’d been having to help him in to the car; he was getting very stiff.  Well, a hundred years old is old! 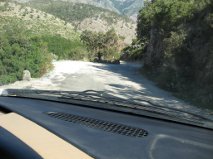 Another picture through the windscreen – I think that is sheep on the road ahead, can’t remember

It was too hot to sit in the sun, and I propped myself up against the side of the caravan while I sat and ate.  George looked up all of a sudden.  He seemed to be looking at something on the rocks, his hackles went up and he let out a low growl.

There, standing watching us, was a dog.  It was some 200 metres away and it just stood silently, watching intently.  Probably attracted by the smell of the chicken, I thought, and I took a quick bite. Two other dogs joined it, and George was struggling to his feet, hackles still up and growling.

“There are some dogs upsetting George,” I said as Bruce sat up.

They just stood there.  They were not menacing, but George was clearly trying to warn us – and it is funny how animals know.  Bruce took a photo. 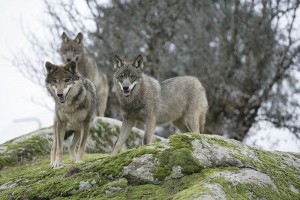 apparently there are only some 300-400 wolves in Albania and they are protected by law, as indeed they are in most countries. Albanian livestock farmers, however, receive no compensation if a wolf carries off one of their animals, whereas in most other countries farmers are compensated for loss

The logical side of me knew that if I clapped my hands it was quite possible they would run away, but I didn’t like it.  Quickly we scooped up our picnic, slammed the caravan door shut (I mean, wolves are bound to go in to the caravan, aren’t they?  All the best wolves get in to caravans) and scrambled in to the car.  We sat there, me, Bruce and George, on the front seat like a threesome of plonkers.  George kept trying to shove me over on to the gear stick and I had to come to an agreement with him about my chicken sandwich if he’d get in to the back seat, which he eventually did.

We moved on promptly enough and the road skirted down towards the sea for a while, then up in to tthe mountains again.  The car, not really designed for this kind of thing, was doing fine.  It was extremely hot and that sea, way over off the cliffs, looked so inviting.  I hoped George didn’t notice, for it was going to be difficult to explain to him that there was no road down to the beach.  Dogs don’t understand that sort of thing. 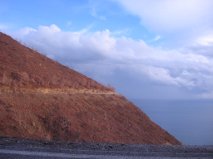 Here you can see the road cut in to the escarpment, showing where we had driven just moments earlier. 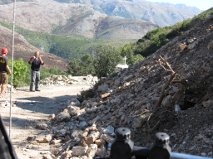 Miles upon mile of nothing and nobody, then …

After 200 miles – more – of extremely narrow mountain roads, and barely a sign of other humans, we came across roadworks.  I mean you do, don’t you?  All isolated places get road works on them.  We were coming downhill on a steep bend and suddenly infront of us there was an excavator with (I am told!) a hydraulic breaker, making impossibly hopeless attempts to break rock out of the side, presumeably to widen the road.  This machine blocked the road totally, the road being only 10′ wide at best.  The man inside carried on working for a bit while a couple of other men stood and looked on.  After a while the machine driver moved aside to let us pass, as best as it could. In the meantime, of all things, a coach came up behind us, and in the other direction came a truck.  It was almost funny. 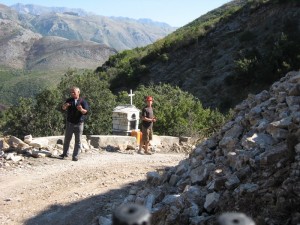 Lorry and coach drivers.  The little memorial grotto you can see there was quite common, all the way up the mountain and down the other side, sometimes with photos of whoever died there and sometimes with statuettes.  You can see how narrow the road was!

Because we were half way round the bend and on a steep downward slope, our 40′ rig was skewed across what little road there was, blocking everything.  Because of the steepness of the hill, and the caravan’s breaking system, it was impossible to reverse back up.  The driver realized this and so, in order for us to tuck ourselves in further to let at least the truck past, he put his hydraulic arm down beside the front of our car and lifted the entire side of his 40 ton machine up so that we could sneak our bonnet underneath.  This resulted in his huge wheels almost touching our windscreen.  I wished I had got out.  Just enough space was then freed up for the truck to inch past with one of his dual wheels hanging over the side of the 1000′ drop sheer cliff.  Then the machine driver had to manoeuvre his 40 ton machine away from us while still above us so that we could make our escape.

Catherine Broughton is an author. Her books are on Amazon/Kindle or can be ordered from most usual sources.