Myths and legends in this part of France, the Charente Maritime; part 2. 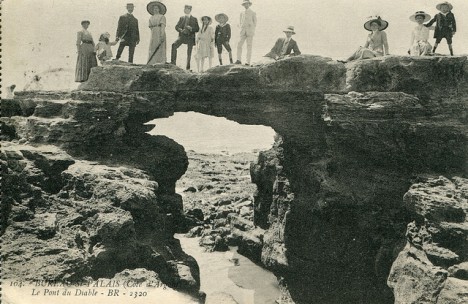 There is a forest nearby, called La Foret de Combot.  It was once inhabited by two sisters.  One of the sisters was called Elea, and she was very beautiful and local people called her the Fairy of Combot.  The other sister, Sylvine, was very ugly and in no time was dubbed the Witch of Combot.

Not only was Sylvine ugly, she also had a dark, black heart.  It was so dark and so black that the devil fell in love with her.

The devil dressed up as a handsome young sorcerer and in no time Sylvine was seduced by him.  Sylvine soon found that she was pregnant.  The devil dropped his disguise and Sylvine saw who he really was.

“I am leaving now, but when my son is born,” said the devil, “I will return.  Make sure you do your job properly!  My son will be king of the earth and the very spot where he is born will be his palace !”  And he then disappeared in a great flash of fire.

But the lovely Elea had witnessed the whole scene, and she decided that she would not allow another devilish creature to install itself in the area.  So when Sylvine gave birth, Elea cast a spell so that Sylvine could not move. Elea disguised herself as Sylvine and grabbed the baby.  She rushed out to the dangerous rocks in the sea and cast another spell, and a beautiful palace for the newborn appeared in the turbulent waters, with a rock bridge leading to it.

In no time at all the devil came to see his new son.  He was delighted.  He grabbed the baby and rushed out towards the palace.  But the rocks were slippery and the waves were high and the devil slipped and fell in to the depths of the dark ocean, and was never seen again. Elea, quick as a flash, cast another spell which changed the devil-baby in to a dolphin.

And to this day you can sometimes see him splashing in the water.  And all that remains of the palace is the rock bridge.  The spot is called “Le Pont du Diable”. 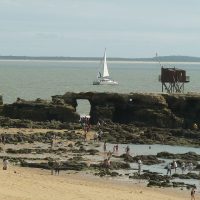 The Pont du Diable is on a sandy beach at St Palais, about 20 mins’ drive from our properties