Myths and legends from this part of France, part 3. 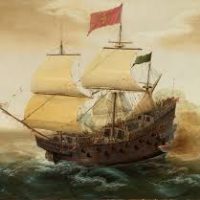 The coastal area here, like coastal areas all over the world, was subject to raids and piracy, lootings and pillaging for many centuries.

One day some Spanish ships anchored off shore and the sailors came on land and raped and murdered the people and stole their possessions.  They then sailed away in to the night, as suddenly as they had arrived.  The devastation they left behind was total. Very few were left alive but, with the strength and determination of righteous people, they re-built their village and re-planted their crops, and soon the community was thriving again.

Then one spring night, when the water was very calm and the air soft, a lone Spanish ship slipped in to the bay, half-hidden in a gentle mist, and totally quiet.  Silently, the sailors lowered their boat and rowed ashore, their oars making the tiniest splashing sound in the water, followed by the quiet crunching of the sand as they pulled the boat on to the beach.

What they did not know, however, was that the people of the village had taken in a destitute magic woman named Artouan.  They told her that, in return for housing and feeding her, she was to cast a spell over any further Spanish sailors who tried to invade.   As the sailors made their way silently towards the sleeping village, the magic woman watched from her hiding place.  She cast a spell and changed the road so that it led in to the marshlands.  The sailors soon realized they were lost and they wandered around in the dark muddy waters, trying to find a way back to the road.

When they were all exhausted and desperate to go back  to their boat, Artouan cast another spell and changed them in to little stone huts, the remains of which can be seen dotted all over the marshes to this day, and the village that Artouan saved was re-named Artouan as a thank you.

Artouan is a small village a mile or two from Rochebonne, our house. 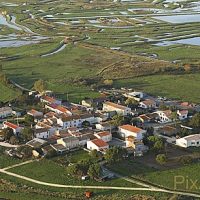 Interested in France ?  Book your holiday by sending an e-mail to Sarah [email protected] and visit our web site for details of our lovely self-catering properties.

our part of France