It happened like this … an English family move to France. Part 6. Red tape in France. 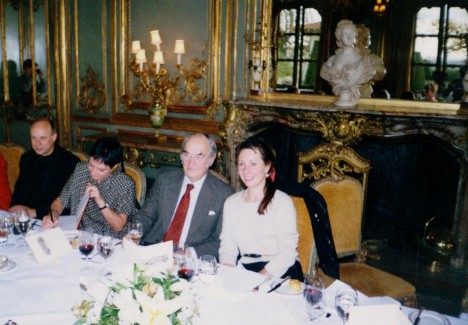 Main picture: back in England celebrating my father’s birthday at Cliveden; me sitting  (in white) with my lovely old daddy, one of my sisters, and my brother-in-law, Brian Eno.

It was a cruel irony that during the summer months, when I was terribly busy, friends and family would pour out to see us.  I am from a huge family, and we are all closely-knit.  Goodness, we were happy to see them, all those brothers and sisters and cousins – loved seeing them – and there were times we’d have as many as 9 or 10 extra people in the house, which was fun, exhausting, hilarious, entertaining, loving, appreciated hugely … and bloomin’ knackering!  I learnt that all meals, breakfast included, need to be outside. You’d be amazed at the difference it makes to the order of the kitchen and dining areas.  Sometimes I could barely get the sheets off and on the beds in the guest rooms in time for the next surge of visitors.  Everybody mucked in and we were a noisy, active, fun-loving household, playing silly games and probably drinking too much.  We all love good food, travel, literature, quick-witted conversation.  They were excellent times where I could enjoy conversation and laughter the way I had before.

During the winter months, however, when my loneliness was huge, and the Atlantic wind whipped in over the fields, nobody came.  The views that were so gorgeous in the summer, turned to expanses of wet grey and brown, lit by the occasional winter sunset.  I used to stand at the living room window and scour the muddy fields for a sign of life – a car in the distance, perhaps, or a bird in the sky.

I remember commenting to somebody – or was it just to myself? – that a huge view like that had a few disadvantages, and one is that when the weather is bad, you can see the bad weather for miles and miles and miles.  It was disheartening to say the least, and I longed and longed to go home.

I did make one friend, an English woman with seven – yes, seven! – children.  I sold her a house in the village.  Her husband was in prison, a Frenchman, and her youngest was just a toddler.  What in the world she imagined she was doing moving to rural France with all those children, I have no idea.  It was lunacy.  But she needed me in a practical sense, so I helped her.  And I needed her in an emotional sense, and she helped me.  We were two lost English women surrounded by windy fields and foreigners, and we huddled together, so to speak, in our Englishness.  I cannot even remember her name now.

It was at about this time that, spurred on by a word of warning from a young notaire I was slightly friendly with, I made more enquiries about the legalities of my activities.  To date, everything had been fine.  I couldn’t for the life of me think I was doing anything illegal.    The incident with the “Gestapo”, however, made me ever-cautious and, following the advice of a British Consular representative, I placed no ads anywhere and relied uniquely on the jungle-drums.

Not, I hasten to add, that I wanted to be illegal in any way.  Quite the opposite.

“French bureaucracy is a nightmare,” he told me, “miles of red tape, stupid office girls who don’t know anything, dozens of different rules and regulations.  Even I after 40 years in France find it difficult.”

That is why, of course, so many new French businesses start up in the UK.

Now, listen – this is something really important one needs to know about the French fonctionaires, ie the women (or men) working in all the government offices.  And that is that they will give you very good and precise information in answer to your question.  Providing you ask the right question, the system is very good indeed, with a great back-up team.  But unless you ask the appropriate question, you get no information.

And so I went round and round in frustrating and frustrated circles.   There is no CAB in France, though they do have something similar – if you know about it.  If you don’t know it is there and nobody mentions it, it is of no use, not least because it is not a high street presence but a section of an office system.  Like many words and phrases you cannot translate Citizens’ Advice Bureau in to French, and I tried asking for somewhere I could get information … Yes, Madame, bien sur, information on what ?

The British Consulate was friendly and genuinely tried to be helpful but even they had little idea, and could only advise me to find out.  Sure, I want to find out, I wept, but who do I ask ?!

Rochefort, which was the closest administrative centre, was over half an hour’s drive away – closer to an hour if the bridge was up letting a ship through. The river Charente runs through there, and in the old days it was the main – the only – shipping route to Cognac.  Some pretty big boats still go through. 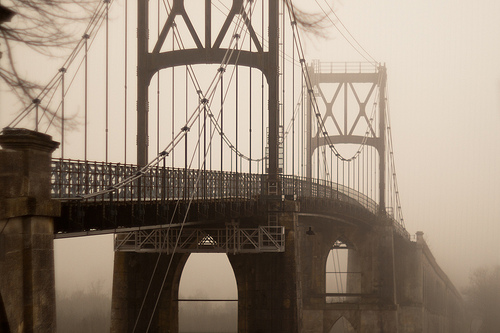 old photo of one of the bridges on the Charente, next to Rochefort

Although the internet had by this time seeped in to France, it was nothing like the internet access to information that we have nowadays.  We had a computer which was more for storage of letters and manuscripts than anything else – and that in itself seemed marvellous.  Seems odd now, but in those days being able to correct typos on the screen, just like that, was still quite a novelty, not to mention saving documetns.  So it meant that I had to drive in to Rochefort, or phone in or write a letter.  But as I didn’t know who I was supposed to contact, or even why I needed to contact anybody in the first place, it was a true wild goose chase.

I started, of course, with the places where I was already registered – the Chambre de Commerce, the Chambre des Metiers, the accountant (yes, the same one) and so on.  Nobody seemed to have the appropriate information, and I wasn’t really quite sure what that information was supposed to be anyway.  I spoke to a solicitor who looked something up in a huge book, and he was able to confirm that as estate agent had to, by law, have a Carte Professionelle, but he couldn’t say quite what that was, nor where I should get it.  All this took a great deal of time.  Trying to speak on the phone was even worse because, true to form, I didn’t know who I was to ask for and the switchboard therefore couldn’t pass me on to anybody.  I was frequently put on hold (ne quittez pas!) while Green Sleeves piped down the line at me, on and on and on.

Eventually somebody suggested I contact the police.  What in the world have the police got to do with all this ? I wailed.  But I did write to them, at the Rochefort address, asking them about a Carte Professionelle.  Something like three months went by before they replied to say that they did not issue Carte Professionelles.  I phoned them.

“I am well aware you may not issue them,” I said (but in French), “I am just trying to find out what it is and if I need one.”

My friendly notaire friend eventually gave me a form he had dug out for me, in which it stated what academic requirements were needed in order to be eligible for the famous Carte.  A degree was the main thing, and that was fine, I had two degrees.  But it still didn’t tell me if I needed one.

After countless phone calls, countless trips back and forth, countless letters, I wrote to the National Association of Estate Agents in the UK.  They replied within a week, telling me to get a Carte at all costs – otherwise, they said, you could find yourself in prison.  They added that I needed to apply at Police Headquarters in La Rochelle.  There, I needed to contact the Highest of the High, a man by the name of Valtel.

I was frightened and nervous.

Normally an extremely self-confident and self-reliant person, I found myself sometimes in tears for no reason, or in a temper.  I seemed to have constant headaches.  I had confused nightmares about the Gestapo moving in to our house, gendarmes in my car and the hill our house stood on crumbling in to a wide red river.

One side of me felt that it couldn’t possibly be that bad, that serious.   All transactions went through the notaire, after all, all accounting went through a chartered accountant, I had my registration number with my activity clearly stated on it – where was the problem?  I kept a very strict and careful record of absolutely everything I did, frequently writing down completely unecessary – and sometimes daft – information, and I signed and dated each and every page.  Nothing got crossed out and Tippex was banned.  “The house with the red front door”, my notes would read, “vendor named Jean-Pierre Dupon (middle names unknown at this stage – to be provided.)  Chipped paint on front door.  Requested sale price 300 000 French francs but that is crazy.  Nobody will buy it.”   I wrote it all down in neat columns and neat notes, even putting in little illustrations of flowers in the garden and sketches of the front of the house.   Facetious ?   Oh yes, it was facetious of me.   They want me to keep strict notes ?  Well, they’re going to get strict notes!   As it happens nobody ever asked for the cahier, or anything like it again.

But the other side of me kept remembering the Gestapo, and apprehension made its way through to the very core of me.

During all this, of course, I was raising my family, running the household, running my business, getting on with life.  I continued selling houses.  Not only did I bring in good money but Bruce’s business depended entirely on mine.  And some five or six men’s jobs depended entirely on Bruce’s business.  Furthermore, clients who had contacted me months earlier would turn up to view and I could hardly say to them “sorry, my dears, I can’t show you anything because am worried about the Gestapo” !

So when the gendarmes turned up and “invited” me down to the police station, why was I surprised?

Catherine Broughton is a novelist, a poet and an artist.  Her books are available on Amazon/Kindle or can be ordered from most leading bookstores and libraries.  They are also available as e-books on this site.