It happened like this … an English family move to France. Part 5. Fitting in to France. 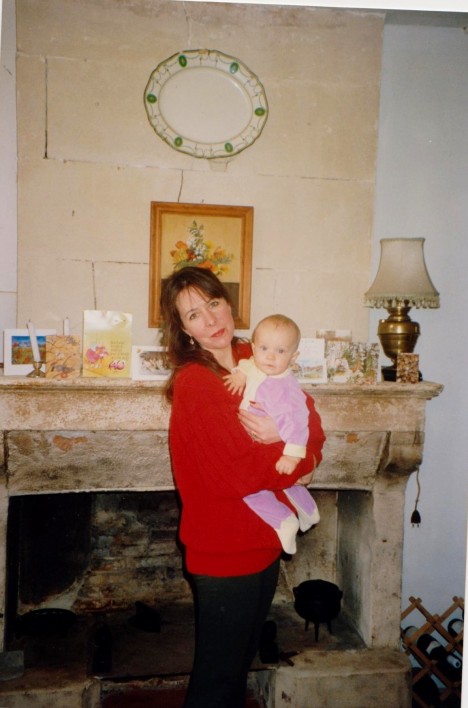 Me in the kitchen, holding one of my nieces.

Months turned in to years.  We restored our house on our usual shoe-string budget, lived our lives, had streams and streams of family and friends in the summer months and put up with icy, windy and lonely days in the winter.   France – this area at any rate – has none of the “cosy” atmosphere of pubs and villages in the south-east of England, and people don’t seem to invite each other round they way the British do.  I battened down the hatches, emotionally-speaking, and just got on with it.

We both worked incredibly hard.

Bruce had a non-stop stream of buildings to repair and restore, thanks largely to my sales, and he took on a team of between 2 and 8 men, some of them British men who couldn’t find work.

So many “builders” came to France thinking they would find work with the great stream of Brits buying-up property, but they rapidly found three major problems – one, that it was much harder than they ever imagined to learn the language and/or the bit of French they had learnt did not take them far; two, that everything was a long way away.  France is a big place and the nearest DIY shop can be bloomin’ miles and miles away, and when you got there, none of the helpful service you usually find in the UK was available.  Indeed proper service was unheard of, though it has improved hugely since.  Or have I just got used to it ?  And third – most of them were no where near as good at DIY as they thought they were; they thought they’d be able to handle this and that, but when it came to it they couldn’t.   Houses they bought as near-ruins remained little improved, everything took ages, life was disappointing and in no time their house was back on the market with somebody like me, and sold again so that the family could go home.  We saw it over and over again. 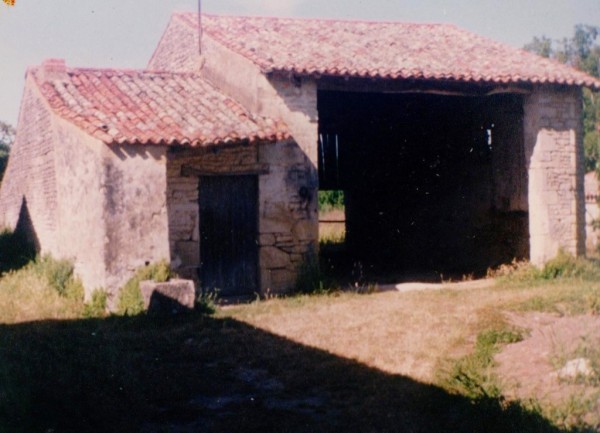 Even more importantly, the English (yes, they were English rather than British) didn’t understand that in France one is not free to work the way we are in the UK.  Not even a jobbing builder may do so without having the appropriate certificate, number, registration and so on.  He has to do an obligatory course (called un stage) which lasts anything from 6 weeks to 6 months – and which has to be paid for.

That is why there is such high unemployment in France – half the population is simply not allowed to work!

Above and below – before and after photos of one of Bruce’s jobs.  I sold the barn for something around £5000, I think.  On small sales like this my commission was tiny, and often barely worth the bother if the vendors were several (frequently the case) and the sale complicated and time-consuming.  But if Bruce got the building contract it became worth it. 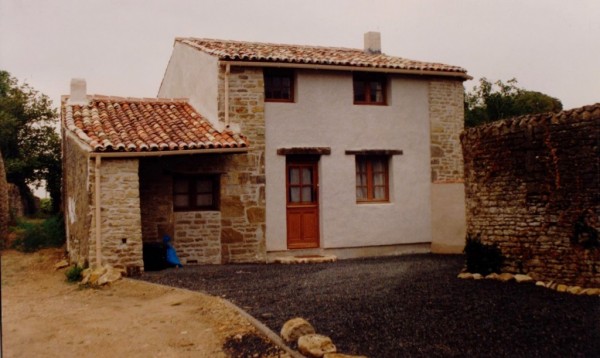 Bruce worked very long, hard, arduous hours and, as is so often the way with builders, his clients would start off adoring the very ground he walked on, but by the time the job was finished they were sick to death with inevitable delays, with shelling-out money and men crashing around their house.  I think that’s a given, all over the world.  Although his French remained bad from a grammatical point of view, Bruce rapidly became familiar with all the building vocabulary and in no time was well-known at the various builders’ merchants.  The men who worked for him respected and admired him; one or two left and tried to set up in competition (and failed) and one or two  left because they wanted more money, and then came back six months later looking for work again.  We saw that over and again too.

I worked excruciatingly hard in the summer months.  The first few clients would arrive at Easter-time and last through to the October.  There was almost nobody in the winter.  When the children were on holiday from school they either had to go to the chantier with Bruce, which the elder two frequently did, or to a childminder.  Jake quite often came with me.  Funny, the way my clients didn’t seem bothered that I’d got a toddler on tow.  He was always incredibly good and would spend the whole day strapped in to his car seat, being lifted in and out and carted round buildings.   I don’t think he ever cried, not even once.  I do remember, however, him suddenly declaring “poo!”  There was nowhere convenient to stop and I was extremely tired at the end of the day and eager to drop the clients off at their hotel.  “Poo!  Poo!” insisted Jake.  Then, thinking I perhaps hadn’t understood he changed it to “caca! Caca!” till I pulled in and got him out of his seat.  As is typical in these situations, he did a poo about the size of a pea.

I also remember those particular clients.  They were what I called “eternal lookers”.  These fell in to two categories – those who were looking around, at my expense, because it was fun and interesting to look inside other people’s houses, and then those who genuinely wanted to buy something, would love to buy something, talked all the time about buying something … but were never going to actually do it.

These clients, from South Africa, fell in to the first category but it was only the following year when I took them around again that I suddenly realised.  They were just enjoying a day out and had even had the gall to tell me they would like to look at much bigger properties when they came back next year!  I dropped them off quite suddenly, where they could get a taxi back to their hotel.  They were flabbergasted.

The other sort were the type who would always be so careful they would never get anywhere.  They loved the idea of buying, they had a dream of a little French house and eating croissants for breakfast … but it would always be just that. A dream.  As time went by I learnt to recognise these types and not waste my time – and, more importantly, my energy – on them.

Of course, people who are not self-employed just don’t understand. They couldn’t see that nobody would pay me anything unless I got a commission from a sale. It could be very rewarding sometimes, but frequently utterly soul-destroying.

I also rapidly learnt that just because a client may say he wants such-and-such a type of property, it does not mean he really does.  I’d say 50% of the properties I sold were the total opposite of what the client said he wanted.  Of course, many of them didn’t know what was available and would come out to see me with some pie-in-the-sky idea that lovely houses with long tree-lined drives and green shutters were available for a song at every corner.  One of the first houses I sold, while we were still at La Haute Perriere, was a small village house with a long narrow garden, built on three floors with all sorts of fascinating little higgeldy-piggeldy rooms and nooks and crannies.  It was on the little high street of a touristy village, one of a row of terraced houses with no front garden.  The people who bought it had told me:

“We want something out in the countryside, detached, no neighbours.  We want views, views that stretch for miles, big spacious rooms, lots of land …”

I also learnt to keep my opinions to myself.  People like to think they are making their own decisions.  An early client was a Sam Watson, aged in his seventies, who came out to realise a long-held dream.  He chose a very isolated property in the middle of nowhere, and it needed masses of work.  I advised him against it.  He lived, in the UK,  in the same street as his daughter, somewhere north of Watford, belonged to a darts team, could walk to the pub … You’ll be lonely here, I said.  Stay with what you’ve got at home,  I told him.  He was furious, really furious and told me I was patronising.  He bought the place via another agent, but not even a year later I saw that it was back on the market and learnt that Sam Watson had gone home.

I also learnt to save time and energy by taking the client with me to view rather than view in advance.  They were usually as interested as I was.  I also rapidly learnt to develop a thick skin.  In the early days clients would regularly reduce to to tears.  Sometimes I would put in so much energy, so much time, so much thought … just to find that they didn’t like the area, and they would disappear from my life without even a thank you, leaving me to fill up again with petrol and pay the childminder.  And it certainly didn’t matter to them that it was my child’s birthday, or a French bank holiday, or I was half crippled with period pains.  It may be that they assumed some invisible entity somewhere was paying me and that this was my job … I don’t know, but on the whole I’m afraid clients were generally rude and thoughtless.

Of those that did buy, some became friends.

And that was great.  We still know some of them to this day.  Others would complete their purchase and we’d never see them again, and that was also fine.  But a third group seemed to want blood out of me.  I worry, as I am re-reading this, that I am moaning.  That is not my intention.  It was hard, very very hard sometimes.  People would come out, having bought their house, and expect me to do so much for them.  And if things went wrong it somehow became my fault.  Even the bad weather (we had three or four bad summers at that time) seemed to be my fault.  If I charged for my time and trouble they found me unreasonable.  A huge %, all over France, regretted their purchase, sold up and returned home.  Just as the removal man had said.

Coming from such a large family, and having moved all over the world – yes, all over the world – throughout childhood and well in to adult life, I had never learnt how to ride a bike.  Now, that’s a funny thing, isn’t it ?  So we bought bikes for all of us and I wobbled along till I got the hang of it, William running along behind me shouting “go mummy, Go!!”

Cycling for a year or two was a hobby that we all enjoyed together, almost every weekend, rain or shine.  We cycled all over the area, which was largely flat, and the only hill apart from our own hill was dubbed The Top of the World by the children.  We often packed up our things and went camping on the Ile de Re for the week-end, and that was brilliant, cycling along the latticed paths with the Atlantic stretching out to one side and pine forests to the other.  The Ile de Re has since become too touristy for us, but it was great in those days.

We met a Parisian couple in the village, also new to the area, and have remained firm friends all these years.  Alain and Sylvaine.  Alain approached me at a Loto evening at the children’s school (I always tried to go along, show willing, be interested) and fairly recently he told me that I was so pleased to find that somebody was going to talk to me that I all but grabbed him by the scruff of the neck!

For information on Catherine’s holiday rental properties in France go to www.seasidefrance.com