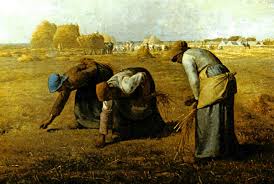 I read “La Terre” when I was at University.  I remember it partly because it is a very good book, haunting and hard-hitting.  I remember it also because the lecturer one day, during a discussion near the start of the book, blurted out somewhat loudly :

” … so you see, he preferred to ejaculate his sperm in to the earth rather than impregnate his woman!!!”

We students kept straight faces because, after all, this was Very Serious Stuff, and not a giggling matter, even though at age 18 a giggle seemed more appropriate.  Being the beautiful young things that we were, the lecturer didn’t look as though he would know anything at all about ejaculation or impregnation.

Emile Zola has his place in history partly because he was a great writer (indeed he is buried in the Pantheon alongside Alexandre Dumas and Victor Hugo) but also because he marked a very clear turning point in the power of the public in a world that was ruled by the upper echelon of the social classes, a world where “ordinary” folk kept their opinions to themselves – or, if they didn’t, they got nowhere.  Emile Zola’s voice was a powerful and lasting tool in social change that was much needed. 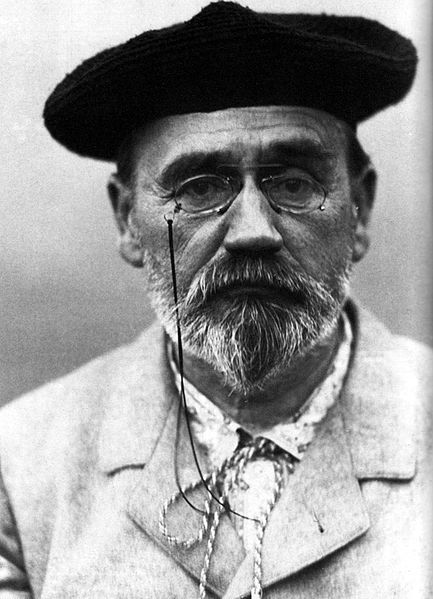 France at that time was ruled by Napoleon III who, despite the Revolution a hundred years earlier and the changes that were supposed to have been wrought, had himself made Emperor in a coup d’etat that can only be described as fraudulent.  Zola loathed Napoleon III and all that he stood for.  What had the Philosophes of the previous century striven for, if this sort of thing could still happen?  Zola’s writing echoed  the works of the great artists like Millet and Renoir, and poets like Verlaine – look at how the other half live, though while Renoir and Monet depicted the rural side of life and the simpler aspects to ordinary people, Zola bit deep in to the nitty gritty of injustice and poverty.

Zola was born in Paris, though his family moved to Provence when he was tiny.  At school there, he befriended one Paul Cezanne, with whom he retained a friendship that lasted many years (though they eventually fell out).  Zola’s father (an Italian) died young and Emile was raised by his poverty-stricken mother who, against all odds, arranged for him to go to law school.  However, Emile failed his baccalauret and so went to work for the publishing company Hachette in Paris.  This gave him the stepping stone he needed to get in to the world of writing – at first newspaper and magazine articles for a variety of publications, and short stories.  He was eventually sacked from the Hachette because his articles were often politically and socially inflamatory.

Zola was particularly interested in what he considered (probably rightly) the main scourge of the poor: alcoholism and prosititution.  In a society where prostitutes were riviled, he recognized that for many it was simply a question of staying alive the only way they could.  In some ways his books have a sameness to them, in that the main thread running through them does tend to revolve around poverty-alcohol-cruelty-ignorance-prostitutes-poverty-ignorance- cruelty … and so forth.  The style, however, is rich and clear, and very evocative not just of the scenes but of the very feel and smell of the era.

The publication of “l’Assommoir”  in 1877 turned Zola in to a wealthy man.  He gave intellectual dinner parties and surrounded himself with like-minded influential people.  And it was via this circle that Zola’s most famous word “j’accuse!” had the impact that it did.

“J’accuse!” was the headline for a newspaper article Zola wrote in defense of the Jewish army officer, Dreyfus, who was wrongly convicted of treason and sent to life imprisonment in French Guinea on Devil’s Island.  Information about the innocence of Dreyfus came to light (without going in to the case which would be a different subject altogether) but, essentially because Drefus was Jewish and there was a general anti-semeticism at the time, Dreyfus made a good scape goat.

“J’accuse” was shocking.  In it, Zola pointed the finger in no uncertain terms at the army and at corrupt authority in general.  The ramifications of the Dreyfus case dragged on for years, but he was eventually released and exonerated.  This was a very prominent example of the rise of intellectuals, the opening-up of public opinion, and the shaping of interaction betwen those in power and the voice of the masses.

Aged 25, Emile Zola married Alexandrine, a seamstress who had been his mistress for several months.  They had no children but, tragically, Alexandrine had had a child which she had been forced to give up at birth. Zola helped search for the child, but to no avail.  Some time later Zola had an affair (with another seamstress!) and had two children by her.  He loved and supported both children, Denise and Jacques, and remembered them in his will.  He died in Paris, a wealthy man, aged 62.

Catherine Broughton is a novelist, a poet and an artist. Her books are available from Amazon and Kindle.  More about Catherine Broughton, to include her sketches and entertaining articles from around the world, on http://turquoisemoon.co.uk