Extract from “A Call from France” 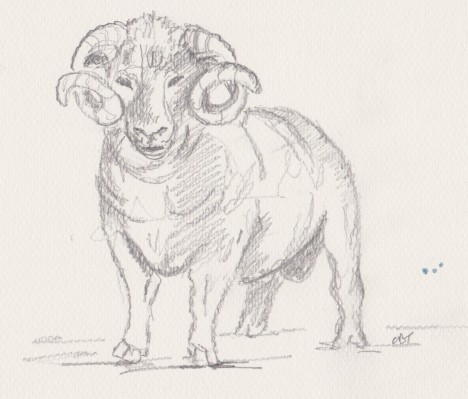 “A Call from France” by Catherine Broughton.

“How do you say un bouc in English?” asked Debbie.

“And the moutons ?” chimed in Bernie

“Sheep,” I corrected him, “it is sheep, whether one or several of them.”

We looked over the domaine several times, wandering through the huge, dark, empty rooms and round the dilapidated gardens. An ancient stone wall, some two metres in height, surrounded the entire plot of land – three or four acres – crumbling away in places. Ivy grew in dark green leafy strands through the broken stones and in parts the stinging nettles and brambles were so high you couldn’t see the wall at all.

“The garden was once lovely,” Euan commented.

He indicated an old stone bench hidden by overgrown shrubbery.

“Somebody once loved this place,” he said.

Here and there were the wild remains of trimmed and shaped hedges, roses, flower beds, stone urns, decorative trees and shrubs of all sorts. Lilac and forsythia spread haphazardly across what used to be lawn, and there were huge clusters of irises and even some agapanthus – which I hadn’t seen growing wild since South Africa – and all the while the sheep wandered lazily around, chumping at the grass. Most of the shutters had fallen off, or were hanging dubiously. The sturdy iron gates had rusted. The entire place was heaped with fascinating ancient features, from the wells and iron hand-pumps in the grounds, to the weedy remains of a vineyard. There were a couple of massive ancient stone sinks, dating back to the 1600s, lying in the bushes, clearly flung out during a “modernization” period before World War Two. The entire place was hugely romantic and we liked the idea of being near the sea – barely three miles away – and nearer Royan and Oleron, places that were lively if only in the summer. We both longed and longed for company and action of some kind.

“You really want to go back home,” Euan said, putting an arm over my shoulders.

“Yes, I do. I want to go home. But I don’t mind giving it one last shot. We’ve been here …” I counted, “ six years. I’d rather just pack up and go home, but if we can’t afford a house in England, this will do.”

“You could put up with a chateau in France, could you?” he asked, grinning.

I looked up at the crumbling building. The Chateau des Cypres. There was something about it that attracted us both. Only people like us could possibly take it on. There were several big old stone barns in varying forms of dereliction. Euan could turn his hand to any kind of DIY, anything at all.

Funnily enough I read an article at the hairdresser’s this morning about a house that had been renovated in Yorkshire and the writer (a woman) said “our friends thought we were mad to take it on”. Yet, by our standards, that house in Yorkshire was in perfect order.

The babes seemed happy with the move and it would also mean that they wouldn’t have to board at school because we were relatively close to Clion. We tried hard to not talk about “going home” in front of the babes, fearing it might upset them at some level. All three were so French in many ways.

“I expect so,” said Euan and helped him to strap himself in to the car. Debbie and Max turned away from the ram and sauntered towards us. I heard afterwards that you must never turn your back on a ram or a billy goat. He just calmly walked up behind Debbie and butted her in the back. With a cry of astonishment and alarm she fell forwards onto both knees, straight on to the stone path. I rushed forward.

“C’mon! Quick!” I grabbed her under the arms, frightened the ram was going to somehow attack. But he sauntered off back to the sheep almost as though he had his nose in the air. Debbie wailed and wailed.

“Max! Get in to the car!” I yelled, still frightened.

She wailed and wailed.

“Debbie!” I said more sternly, “we need to know if you are hurt.”

I turned to Euan.

“She went down with quite a whack,” I said.

Debbie hobbled between us to the car where she eased herself in to her seat, still crying loudly. We looked at her knees. She had been able to get up and move with no problem so we judged there was nothing broken. The knees weren’t even scratched.

“C’mon Baby,” Euan cajoled her, “it’s not as bad as all that. I expect that was a nasty fright, but you’re not hurt.”

“Cry quietly,” I said to her in desperation….

Click below for “A Call from France” from Amazon:-

Catherine Broughton is a novelist, a poet and an artist.  Her books are available from Amazon or Kindle or can be ordered from most big stores and libraries.  For more of Catherine’s work, to include her sketches and entertaining blogs, go to http://turquoisemoon.co.uk