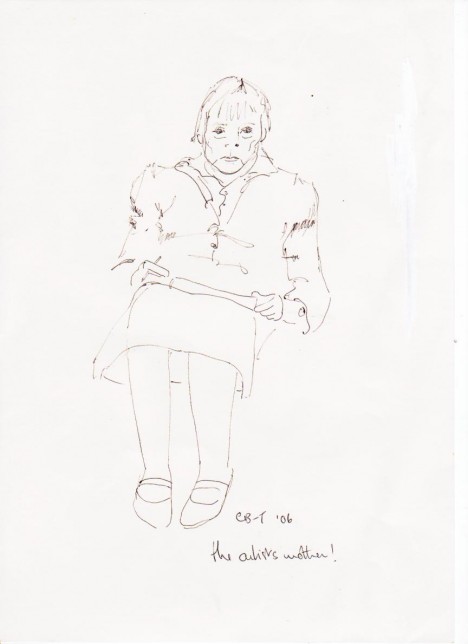 My mother did the camino to Santiago de Compostella when she was in her late seventies and early eighties.  She always referred to it as The Camino and said that those days were among the best in her life. The word camino is Spanish and means the road or the path and refers to the pilgrims’ way to worship at Santiago de Compostella.

The camino starts in a variety of different places, simply because over the centuries the pilgrims have started in a variety of different places.  My mother started in France somewhere around Lourdes and, accompanied by a man by the name of Mark, did it in several two-week stages – about 800 miles altogether, walking in mountains and sleeping overnight in dormitories in abbeys. 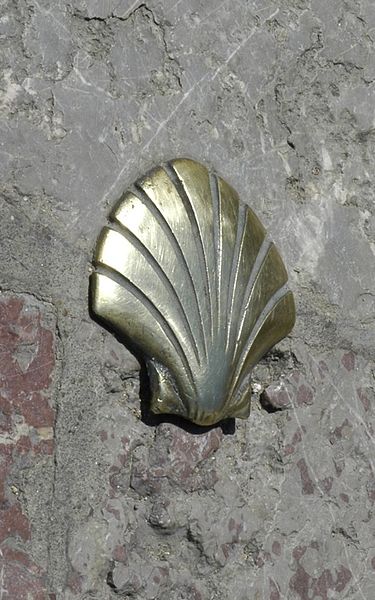 The coquille St Jacques shell motif represents the camino pilgrims and most of them will have a few of these shells dangling from their hats and back packs.  These shells motifs are engraved in to many ancient buildings, including one of ours, to designate somewhere where pilgrims could stay overnight.

The origins of the place are a little unclear. The town dates back to the 9th Century and is named after the Apostle James who, legend has it, had his remains buried here.  The story is that a bright star guided a shepherd to a corpse. The shepherd told his bishop who, glancing at the corpse, declared it to be the remains of the said apostle James.

There is some discussion over how the name of the town came about, with differing views of how the Latin can be translated, but I tend to agree with the translation composita tella, which means burial ground.  Santiago is the Galician translation of Saint James; in Spanish I assume it would become San Jaime (pronounced high-meh).  The French say St Jacques de la Compostella.  Burial ground of St James, in other words. However, campus stallae means “field of stars” (Latin), so it could be that too … 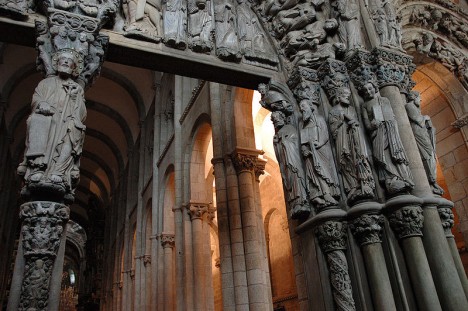 Inside the church a great deal of interesting stone work. Here the apostles are depicted – the writers of the scriptures, all holding their works, except for the first one who appears to be holding a crucifix, making him St Matthew. The one far left is probably St Peter, as head (king) of the church.

Whatever the origin of the name it is a fine old town, declared a UNESCO world heritage site some 20 years ago, and well worth a visit.  Personally, I cannot abide the ornate and gilded artefacts of churches like these, and it is best that I keep my opinions to myself.  My mother was a very devout Roman Catholic, and out of respect for her and the memory of her, I went to light a few candles … quite sensibly the candles are electric and you pop a coin in to a slot and a few candles light automatically …. yet it didn’t seem to be anything to do with God or prayer or even spirituality in its simplest sense.

I was somewhat taken aback, not so much by the ornate gush – may I say bling ? – of the place, but by the priests lined up in little well-lit cubicles, waiting for confessions.  Every now and then a sinner would turn up and kneel down, and the light in the cubicle would go off.  Hey, I respect all religions, regardless of my own beliefs I really do, but I could not help laughing when a friend commented that seeing the priests lined up and waiting reminded her of the prostitutes sitting in their windows in the red light district of Amsterdam ….

Catherine Broughton is a novelist, a poet and an artist. Her books are available on Amazon and Kindle, or can be ordered from most leading book stores and libraries.  More about Catherine Broughton, to include her sketches and items about her travels, on http://turquoisemoon.co.uk

Click below for “Saying Nothing”, a love story set in Spain:-

For more about Santiago:-