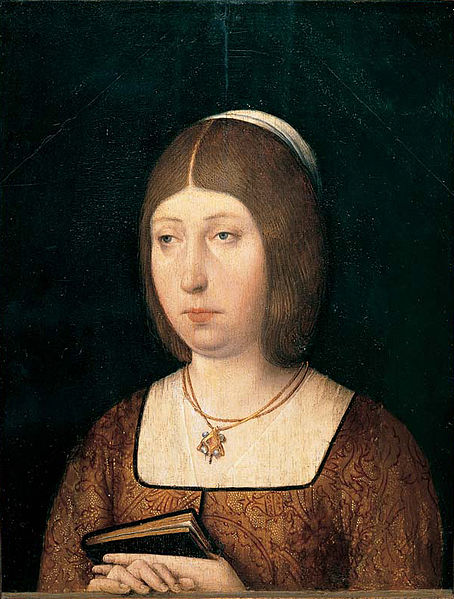 Isabella of Castille (1451-1504) means nothing to the average Brit till they realize she was the mother of Katharine of Aragon, the first wife of our Henry VIII.  I read about Isabella in my youth – it may have been an historical novel.  She struck me at that time, and has remained so in my mind, as a formidable woman.  She has gone down in hisotry as a great beauty, but looking at her portrait, she is nothing of the sort.  I like to think of her as a beauty, and anyway European art of this era hadn’t long crawled out of the dark ages and the associated loss of technique, so the portrait is undoubtedly unreliable. 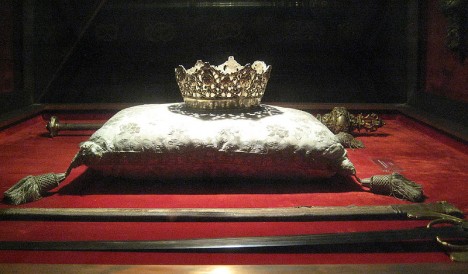 Isabella was engaged to Ferdinand of Aragon when she was three years old, just before her father, King of Castille, died.  In his will the King left his wife and two children in the care of his close relative, Henri IV of France …. who basically ignored them.  Isabella’s mother went mad, they lived in relative poverty, and may well have faded in to obscurity had it not been for the powerful personality of Isabella .

I think one can safely assume that Isabella became strong as a result of the poverty and her mother’s madness.  She was very devout (and is in fact sometimes referred to as Isabella-la-Catolica) and probably believed strongly in the combination of God’s will and the divine rights of royalty. From a very early age she must have realized she was destined for greatness, and the sudden death of her brother (presumeably murdered, but this is not clear) along with the scheming of the French king to marry her off to his own advantage, undoubtedly gave her the armour and determination she needed in order to fight back. 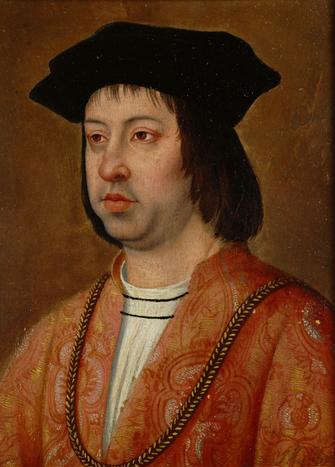 (I think we can safely assume that the two portraits were done by the same artist!  The similarity in pose and expression is of note.)

With the help of Ferdinand’s mother, Isabella and Ferdinand were married and produced 6 children in quick succession, two of whom became monarchs of Portugal and one, as we know, who became Queen of England and produced, in her turn, Queen Mary Tudor of England aka “bloody Mary”.

Large areas of Spain had been occupied and ruled by the Ottoman Empire for over eight hundred years, known as the Moors.  The Moors (Arabs) introduced a high standard of living , with hammams and baths and toilets, in to what was otherwise a dirty and smelly Europe.  Personal cleanliness was (and still is in many cases) an essential element to the Muslim culture.  Once the Moors had (regretably) been driven out of Spain by Ferdinand and Isabella, the Spanish nobility were able to continue to enjoy the luxuries of the Moorish way of life for a generation or two. Katherine of Aragon notes in her writings that she found the English prince* and his entourage very dirty and smelly!  Mark you, her own daughter, Mary, had terrible bad breath and this was one of the multiple reasons Phillip of Spain didn’t stay with her …. but that is a different story.

* she was married at first to prince Arthur, brother of Henry VIII 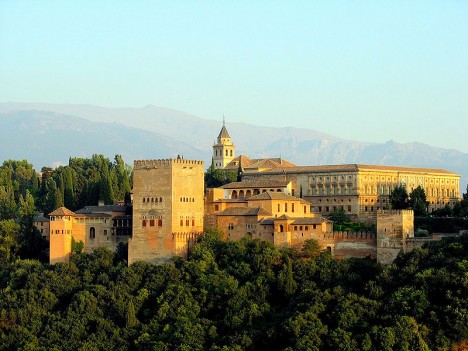 The Alhambra Palace in Granada is a fine example of Moorish architecture and is filled with ponds, baths, exquisite stone and tile work, fountains and cool court yards – so different from the dark and cold stone castles of most of Europe at that time.

The Spanish Inquisition drove Jews from Spain as well as the Moors and any other kind of non-Roman Catholic.  This horrid zeal was inherited by Mary Tudor some time later and – like so many of the similar “cleansings” over the history of man, was bloody, cruel, riddled with torture, deceit,  corruption and horror, not to mention unshackled and unforgiveable hypocrisy.  Well, I suppose it is forgiveable only because that is what they truly believed …

Isabella and Ferdinand were also the bods who set Christopher Columbus (Cristobal Colomb) off on his travels.  Columbus was in fact Portuguese but it was Spain who supported and financed his adventures … which, or course, released another terrible wave of cruelty and hypocrisy in South America.  But that too is a different story!

Catherine Broughton is a novelist, a poet and an artist. Her books are on Kindle and Amazon, or can be ordered from most leading book stores and libraries.  More about Catherine Broughton, to include her entertaining blogs and her sketches, on http://turquoisemoon.co.uk

Click below for “The Man with Green Fingers”, a novel set in Cyprus:-