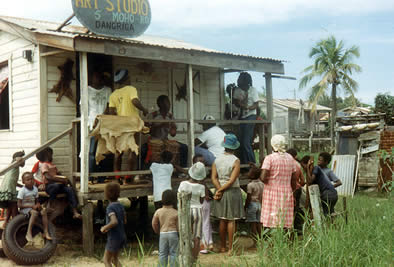 Dangriga is a town of approx. 10 000 inhabitants, situated on the coast in the Stann Creek District of southern Belize.  At the time of British colonialism the town was called Stann Creek Town, changing its name to Dangriga in the 1980s, just before independence.  The word “dangriga” means “standing water” in the local dialect of Garifuna.  As you enter the town there is a sign saying “welcome to beautiful Dangriga” but, try as I might, I can find nothing beautiful about it.  But it is interesting.

The town was created at some time just before 1832, when early records began, by shipwrecked slaves.  Their language is essentially Carib, and they have retained their African cultures especially in music.  Unlike Creole, the langauge is impossible to understand.  Anybody who has lived in Africa will feel at home in Dangriga or nearby Hopkins.

Punta Rock originated in Dangriga with Pen Cayotano (who now lives in Germany) and many punta rock bands have started to emerge, some of them already known in other countries. 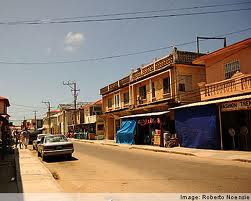 Every November, on or around the 13th, the Dangriga people (and also the nearby Hopkins people) celebrate Garifuna Settlement Day, a bank holiday when they re-enact the slave shipwreck (on a small scale of course!), have a torchlit parade and crown Miss Dangriga for the year.  They also lay a wreath at the statue of one Thomas Vincent Ramos, a Dangriga benefactor and social activist.  Although born in the Honduras, Ramos (1887-1955) was a Garifuna man who fought tirelessly for a health care system for the Garifuna people and who was one of the instigators in the Belizean nursing system (the nursing school being funded by an Englishman, Baron Bliss – more about him another day).  He organized, with the then-British government, the bank and public  holiday that is now Garifuna Settlement Day.  Ramos became a British citizen just before he died.

When we are in Belize Dangriga is our main shopping centre – which is not saying a lot.  Almost all the shops are owned and run by Chinese or Indian peoples, and stock small selections of very poor quality stuff.  Nevertheless, there are a couple of good (new) supermarkets and a large market.  You can get most things these days and, as long as you know in advance that there is absolutely nothing smart to be had, it is fine.  I’d say the best shop is A & D on the main road in, which is essentially a DIY store with a (oddly) section that sells some underwear, sheets  etc.  The jumbly and disorganized manner in which goods are presented and displayed is a bit overhwhelming at first but, thanks largely to the influx of Americans in the area, the local people know all about good customer service. We regularly eat at the lovely Pelican hotel next to the tiny airport in Dangriga, though I have to confess that the only other place I have eaten, in the town centre, had mice running around on the floor …. a bit off-putting to say the least.  There are no pleasant places in the town centre for a meal or a drink. 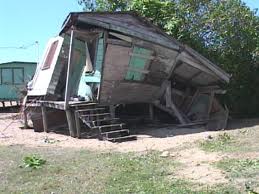 There is a back-packers hostel near the post office but most tourists head for Hopkins, Placencia or Sittee.  Hopkins is well worth a visit.  Or even a long stay.  When we first came to Belize, three years ago, Dangriga was filthy – utterly filthy – but the streets are fairly clean these days, broken and pot-holed, but clean.  I have been told to not go in to Dangriga at night (whereas Hopkins is lovely at night) but whether that is true or not I don’t know.