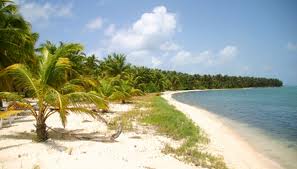 We have just returned from three nights on Tobacco Caye.

The cayes (pronounced keys) off the coast of Belize are small islands situated either on the reef or between the reef and the mainland. It is most certainly well worth visiting a few, but (for me at any rate) they are not necessarily the best of what Belize has to offer.  I say that because so many tourists flock to the cayes, yet Belize is so very much more than that.

There are hundreds of cayes, all basking in the Caribbean sun, but many are uninhabitable.  They offer, on the other hand, good habitat for many bird species, and a great deal of marine life originates in the shelter of the mangroves that dot most of the islands.  The barrier reef runs alongside many of them, 185 miles long, and rich in sea life.

The largest of the cayes is Ambergris, accessed by water bus from Belize City.  We stayed there some three years ago and loved the selection of restaurants and shops … not that there is a lot, but there is more than on any of the other cayes.  The sandy beaches are clean and the accomodation good.  We took a boat trip from there out to a reserve where we went snorkelling in with nursing sharks, extraordinary fish, turtles and rays.  It was amazing.   So far Ambergris has managed to maintain its original feel despite the tourism, but it is now just a question of time. 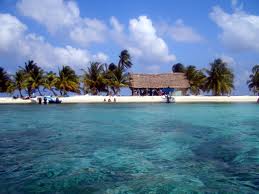 Tobacco Caye is more easily accessible via Dangriga.  You just go along to the Riverside Cafe and ask for somebody to take you out.  There is usually somebody, certainly in the mornings.   A 30-minute ride brings you to the little island – perhaps half a mile at its widest point and boasting some fifteen or so beach cabanas, in varying standards, where you can stay.  I won’t mention the name of the place where we stayed because I couldn’t recommend it*, but suffice to say it was very very basic, backpacker standard apart from the private WC and (cold) shower.  Not that we minded.  It was only for three nights after all.  But it really was very basic.

The other cabanas or guests houses are only marginally better, though really very quaint, and just the thing if you enjoy snorkelling and simply lying in the sun.  Snorkelling from Tobacco Caye is probably the best option in that you can wade in directly from the beach, or off a jetty, whereas for the other you really need a boat to take you out.

One tip I’ll give you is to take your own food.  Many of these places offer three meals a day included in the price, but the food was also very basic and not in large quantities.  We both felt hungry almost all the time.  As it was only for three nights it didn’t matter, and I quite enjoy eating “local” stuff, but I was well aware that I’d be sick to the back teeth with it if we were staying longer.  There is just one tiny shop which sells almost nothing, and a bar which sells beer, coke, rum and a variety of spirits.  It is an ideal place if you enjoy just lying about, reading, doing nothing.

The people, some of whom live there all year round, are lovely.  So friendly and pleasant and smiley.  Well, Belizeans are.

* I am against giving bad reviews on Trip Advisor and the like. I feel that is very unfair and extremely rude. So if there is nothing nice to say, say nothing – at least on internet!