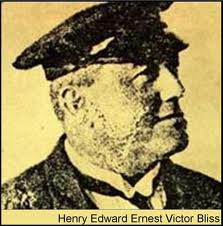 Baron Bliss ( Henry Edward Ernest Victor Bliss) 1869- 1926 was an Enlgishman who bequeathed a large part of his fortune to the people of Belize, 2 million US$ to be exact – which in those days was worth hugely more.  He stipulated in his will (which was 12 pages long) that the capital must never be touched, and that the interest used cannot be spent on religeous matters.  The life and bequest of Baron Bliss is celebrated with a bank and public holiday every year on 9th March, the anniversary of his death.  Until recently called Bliss Day, this bank holiday was renamed National Hero Day in 2008.

Bliss was born in Marlow, Buckinghamshire, England.  It is not known how he acquired his vast fortune, but he appears to have come from a wealthy family.  He married a Baroness (no children) but his title of Baron came from a Portuguese inheritance when he was about 22 years old.   He trained as an engineer but when he was 42 he was struck with a paralysing illness, which left him unable to move from the waist down.  A very keen fisherman, he sailed on his yacht, The Sea King, to the Bahamas, where he lived for five years.  Staff lowered him and his wheelchair in to his boat every day so that he could go fishing.  He was a well-liked man who seemed to have made many friends and who was once described as a “well-balanced character”, but despite this he was forced to leave the Bahamas after a dispute with the (then British) officials.  He re-loacted to Belize which at that time was also British, called British Honduras.

Unhappily his health deteriorated rapidly and he never left his yacht.  Moored off the coast of Belize City, he was visited daily by people both local and British.  Baron Bliss died never having actually set foot on Belizean soil.

The people of Belize have benefitted in many areas from the Bliss fund, to include the funding of a school for nurses and the Belize water system – among many others.  He is remembered by the Bliss lighthouse situated in Belize City close to his memorial.

Now, apparently I am related to Baron Bliss, which is why he interests me.  It seems he had a brother (or was it via his wife?) who married the second-cousin of a great-unle’s nephew’s sister-in-law, who had twelve children who married the fifth cousin twice removed of their great-aunt ……. something like that.