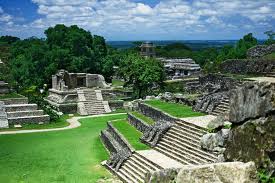 When one speaks of Mayan ruins, most folk tend to think of Mexico, but the Mayan ruins of Belize are vastly more interesting and – arguably – more significant both from an architectural and an historic point of view.

My favourite ruin is not one of the more famous ones.  It is called Xunantunich (pronounced Zan-an-toon-itch), just outside the nice little Hispanic town of St Ignacio in the west of the country.  To access the ruins, a funny little car-ferry takes you over the river.  Well, can I call it a ferry ?   It is a sort of platform with room for just the one car, and it gets hoisted over to the other side.  Getting on and off it requires an experienced driver.   The river is not wide and I expect a bridge will be built in due course.  On the road side of the bridge Latinos have set up their stalls selling Mayan souvenirs.  They are not at all pushy and will step back politely and quickly if you indicate you don’t want any – which would be a shame because they are poor people who need the money, and who survive on really very little.  Look carefully before you buy: Mayan calenders are prominent but some are merely scratched on to a bit of slate or moulded out of a bit of rubbish that will crumble in to nothing when you get home.  I particularly like the woven fabrics, most of which have been smuggled in from nearby Guatamala.

As you cross the river (about 4 minutes!) look out for the huge iguanas lolling around in the trees overhead.  How come they don’t fall off ? 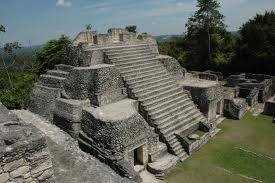 The earliest ruins in Belize date from around 2000 BC (or BCE if I am politically correct) right up to the 16th century and the invasion of the Spanish conquistadores.  The oldest, as far as I am aware, is Lamanai which, although it was indeed invaded and overtaken by the Spanish, was re-claimed by the Mayans.  The remains of a Roman Catholic church can be seen there, built before the Mayans drove the Spanish out again.

The most famous ruin is Caracol, close to the border to Guatamala and thence to the Guatamalan ruin of Tikal.  Caracol was one of the largest kingdoms in all of Central Amercia, subjugated Tikal (which was also huge) and boasts literally thousands of buildings that can still be seen.  Another well-known ruin is Croos in the north, in the Chetumal area.  It has a unique E-shaped building.  There are eleven others in Belize alone, most of which are now accessible. 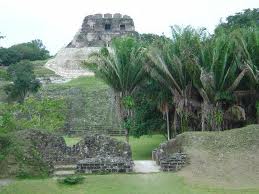