In many parts of the world when you mention Belize people reply “where?”

For those that know Belize, a tiny country on the Caribbean coast just under Mexico, many people think of the islands of Ambergris and Caye Caulker and the legendary Blue Hole.  The country is famous for scuba-diving and snorkelling, being on the barrier reef, and being lush with exotic sea plants and sea creatures.

But Belize is massively more than that.  Extraordinary Mayan ruins, exotic plants and animals, stunning views and lots of interesting little towns …. all on the Caribbean ….

My favourite spot is the coastal area of  Hopkins and vicinity, a little Garifuna village on the beach, still boasting its traditional way of life.  Garifuna (in a nutshell) is like Creole, but not Creole.  They are friendly, cheerful, happy people who will greet you as you pass and whose children are safe to play outside in the streets long after dark.  There are several eateries where you can try out the local dishes, and there are also several European and/or American restaurants too.  We like eating at the German- run “Frog Point”, inexpensive and cheerful and very good, or at Iris’s, owned by a South African lady called, not Iris,  but Maureen.   A little further along, heading south out of the village, there are more up-market restaurants and some excruciatingly expensive hotels and villas. 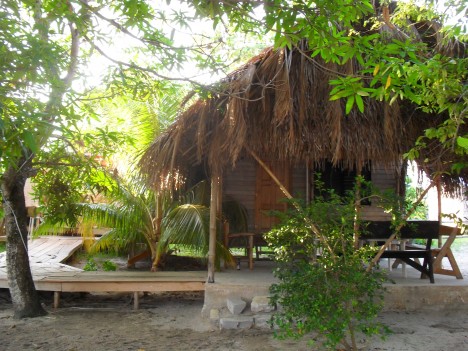 When we first visited Hopkins, three years ago now, the beach was awash with litter and stinking seaweed.  Most of the litter was plastic that had come off various boats and been washed ashore and, just as the Garifuna people have started to understand the importance of cleaning up their beaches, so the rest of the world needs to understand the importance of being so sooo careful when disposing of plastic.  Expatriat residents of Hopkins, and there are quite a few, organize beach clean-ups several times a year and most areas are now garbage-free.

I think one of the things I particularly like about Hopkins is that, although it has retained its traditional culture and values, it has also made way for the modern world which – inevitably – includes tourism.  Each year there are improvements – an ATM this year! – making it a lovely place to stay, be comfortable and enjoy ……