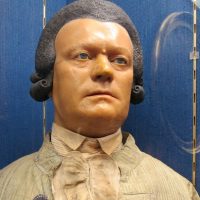 The woman we know as Madame Tussaud was born in 1761 in Strasbourg, eastern France, as Marie Grosholtz.  Her father had been killed in battle before she was born, and Marie grew up in the household of a Doctor Curtuis in Bern, Switzerland, having moved there when her mother got a job as housekeeper for the doctor.

Doctor Curtuis was fascinated by wax modelling, and was very good at it. When Marie was just four years old, the doctor abandoned the medical profession and moved to Paris to set up a studio. Two years later, once a house and work were established, Dr.Curtuis sent for Marie and her mother.

There is nothing to suggest that Marie’s mother was anything other than simply a housekeeper, though it is of note that the doctor sent for her rather than take on a Parisian housekeeper. Perhaps he had tried one and it hadn’t worked out. It is clear, however, that the doctor was very fond of Marie, and this is probably the reason why he sent for them.

Certainly, Marie regarded the doctor as a father-figure, and he was her guardian and mentor. 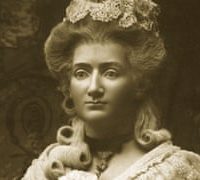 Marie when she was 20, wax portrait done by Curtuis

Meanwhile, Curtuis’ waxworks had built up a considerable following.  These were days when the vast majority of the population couldn’t read or write, and those that could read and write were limited to the classics, the bible and poetry.  Illustrations were of massive importance, not just for those who couldn’t read but to lighten the tedious text of the time.  The wax figures created by Curtuis brought a whole new dimension of entertainment and learning to the general populace, and in 1776, when Marie was 15, the studio moved, by royal demand, to the Palace of Versailles.

Marie proved to be a talented and enthusiastic student.  Her first figure, when she was just 15, was a wax portrait of the philosopher, Voltaire.  By the time the French Revolution came around, in 1789, Marie had become a firm favourite in the royal family. 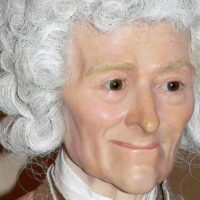 These were dangerous times. The King who, at first, had the support of the people, became unpopular almost overnight, and anybody associated with the royals were suddenly “enemies” of France, to include Curtuis and Marie.  Both faced prison and the guillotine, and Marie even had her head shaved ready for execution.  Both were clever, though, and managed to turn the tables in their favour by offering to do wax effigies for, and in aid of, the revolutionaries.

The grisly task of sculpting death masks from those who had been executed began.  Among the decapitated heads Marie worked from were those of the king, with whom she had spent many happy times, and of Marat – famously murdered in his bath.  It must have been an utterly ghoulish job, but it saved her life. 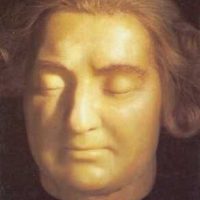 Curtuis died in 1794, five years before the murders ended, and he left his entire estate to Marie.  The following year, alone, and living in dangerous times where a woman could not be alone, Marie married an engineer by the name of Francois Tussaud.  The marriage was unhappy, though they had two sons.  The revolution had destroyed almost everything, to include art and entertainment, and the couple faced poverty.

Marie met a man by the name of Philidor who had an early version of a “magic lantern”.  She teamed up with him – her figures and his lighting effects, and was instantly successful.  France was on its knees and there was no room for frivolities, so Marie and one of her boys, with Philidor, moved to London where there was peace and there were prospects. 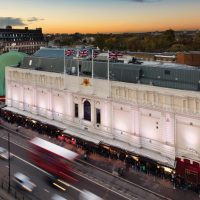 Londoners loved it. Many French had fled France and the British knew all about the horrors of the revolution. Here, with Marie’s wax figures, they had life-like “illustrations” of what had happened.  Marie met with instant success and set out in business without Philidor. Now in her forties, estranged from her husband, this slightly-built woman was famous.  With her two sons to help, Marie set up what we now know as Madame Tussaud’s.

She died in her sleep, in London, when she was 88. Her sons continued her legacy. 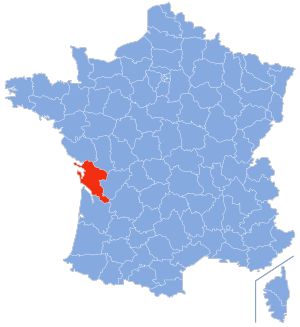 to enquire and to book please go to www.seasidefrance.com