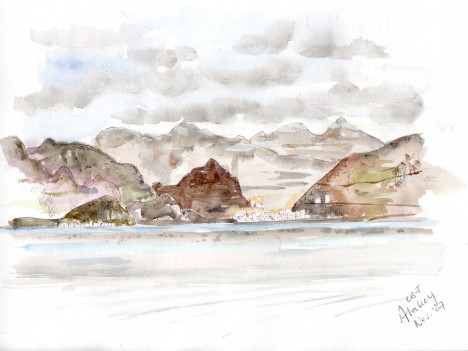 When we reached Troy, it rained and rained and rained. And when it stopped raining, what did it do ? It took a deep breath and just started raining again.
We drove in to Turkey on the western border, having driven up from the south of Greece where we had been basking in warm sunshine. The coastal road was lovely but we didn’t stop, having already been in Greece 6 weeks and, of course, because we had arranged to meet the children in Istanbul. (All the best people arrange to meet their children in Istanbul.) At the border the temperature plummeted to zero and the Turkish officials made us wait hours while they stamped our passports in slow motion, grunted, looked dangerous, made unfriendly noises and generally did their best (or so it seemed) to make us turn around and go back in to Greece. Had we not been meeting the children in Istanbul we would certainly have turned around, it was that unwelcoming.
We, fools that we are, headed for a campsite in the centre of Istanbul. What do you mean, no campsites in Istanbul ? No campsites anywhere ? The Turks are not in to camping. By this time we had travelled through scores of towns in dozens of countries, both big and small, and always ALWAYS found a campsite for a quick overnight stop. We had no idea how massive (nor how lovely) Istanbul is, nor did we twig that it was the rush hour. Towing our huge caravan, we stumbled in to the city centre in thick traffic. At one point we had to turn around, so we did a kind of zillion-point-turn right there amid the crowds. They clapped.

We spent the first night in an excruciatingly expensive hotel, and in the morning found somewhere safe where we could leave the caravan for 10 days, and from there secured a couple of flats, one on top of the other, for us and the children for ten days. Part of the trouble was George. The Turks don’t like dogs. The Turks most certainly didn’t like Great Danes. It was nothing short of a miracle (or whatever the Muslim equivalent is) that we found a place that would accommodate George – there was a lovely big balcony overlooking the Bosphoros where George, then the human equivalent of 100 years old, could lollop around. In fact he died there, but that is a different story.

Istanbul is great. The weather improved, the children arrived, and Istanbul is great. Alix, then aged six, asked me what all the shouting and wailing from the towers was about.
“It’s their vicar, “ I explained, “ he is calling people to prayer.”
Alix looked around at the crowded streets.
“Humph!” he said, “doesn’t seem to be working.”

Old George had died and the children had gone home by the time we reached Troy. It is an odd thing to have lost a dog who is very much a part of the family …. I kept holding the door open for him when he wasn’t there ……….
The Turks are extremely pleasant (apart from border officials) and we were able to park our caravan in a kind of field/garden attached to a restaurant, with a rather dreadful replica of the Trojan Horse staring gloomily in to our caravan window. There was a loo and a cold water shower in the garage, which was okay for the three nights we were there. We motored on down to Ismir (Ephesus en route – amazing – though rather spoilt by the locals all but forcing us to buy leather coats) and spent one night in a motorway garage (in the caravan) and slept a good five minutes, and the second night in a car park where we slept a good ten minutes. You’d be surprised how noisy lorries are. You don’t think about it generally, but lorries are very very noisy things.
So when we got to Marmaris and found Real Live Camp Sites, we were thrilled. Except that they were closed for the winter. We found one that allowed us to stay, just outside Marmaris in a village called Atakoy. So lovely. The old boy who ran it set off in his home-made boat every morning, waving enthusiastically and shouting “good woo-man, good woo-man!” at me if I happened to be sweeping under the awning, or pegging out washing.
We looked at property there and found several places we really liked. But, sad to say, although in winter Marmaris was lovely, we could tell from the several remaining Brits we ran in to that in the summer it would be exactly where we would not want to be – we had left the UK precisely in order to avoid that kind of ignorant loud-mouthed smoking-drinking-yelling ghastly kind of person. So, after three weeks, a spell in hospital, and some lovely memories, we headed off for the Syrian border …. as one does.