Working in Kurdistan, Iraq. US volunteer and aid worker in Iraq. 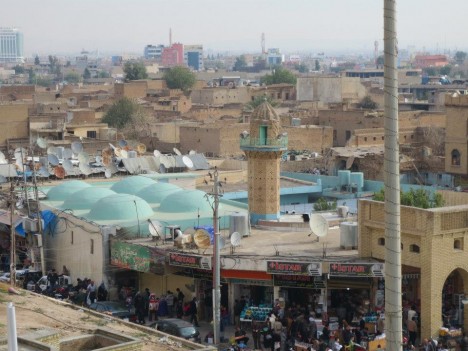 Our guest blog this week comes from a very dear friend working in Kurdistan, Iraq.  For obvious reasons it is best she remain anonymous.

When I first moved to Kurdistan, Iraq for work almost nine months ago, there was some confusion and maybe some concern among my family and friends about my decision. For many, just mentioning “Iraq” triggers an emotional reaction and conjures up images, stereotypes, and fears. When I first began considering a job managing a gender-based violence program for an international humanitarian organization in Kurdistan, I had conflicting thoughts, but I knew I wanted work in a place where women and girls are most vulnerable and where I could put my experience and skills to good use.

Kurdistan is the semi-autonomous region in northern Iraq. It’s important to understand that most Kurds do not identify as “Iraqis” and they are clear to distinguish themselves from Arab Iraqis who are mostly located in central (Baghdad) and southern Iraq. Many Kurds express fondness towards America. In 1991 the US created a “No Fly Zone” in northern Iraq, which provided relief from Saddam Hussein’s horrific attacks on the Kurdish people. This area in northern Iraq is now known as Kurdistan. Many Kurds will tell you that they love George W. Bush and that he is their hero. In the words of some Kurds I have talked to, “George W. Bush gave us our freedom” or “America liberated us”. So, while the US invasion of Iraq was extremely unpopular around the world, some Kurds have a different perspective.

The focus of my job here is to work with government and local NGO partners to develop strategies to protect the rights of women and girls and to develop programs to prevent and respond to gender-based violence. When I first arrived in KRI, I thought for sure I would start a blog, but things became intense very quickly, and it’s been not only hard for me to find the time, but hard to find the words to describe my experience. To be honest, I have struggled here, and every day I struggle to stay. It’s really bothered me that I haven’t been able to write/blog/document what I’m seeing and experiencing, so I appreciate the opportunity to connect in some way to the rest of the world about my small place in this extremely complicated part of the world. Maybe someday I will write more, but for now, I will share a few thoughts.

There are many contradictions here in political, social, and religious life; it’s confusing. On the surface, Kurdistan appears to be very different from central and southern Iraq, but with the work that I do, I see the “underbelly” of the culture and society here; I get to see the darker side of Kurdistan that is not always presented to the rest of the world. Kurdistan describes itself as a “free” society and one of the more progressive regions in the Middle East. It also prides itself on tradition, which is not great for women and girls in this context because it’s mostly tradition, even more so than religion, that causes the most harm to women and girls. To be clear, women and girls are not free here. This is a religious society with strong traditional and societal norms that can be extremely harmful to women and girls, including honor-based violence and honor-killings; coerced suicide (mostly by burning); female-genital mutilation; forced marriage; child marriage; isolation in homes; and sexual assault and rape. Honor-based violence, including honor killing, is common here and occurs when a woman or girl brings “shame” to her family, and the family or community decides that the only way that honor can be restored to the family is to kill the woman or girl. Or, the family or community coerces the woman or girl to commit suicide, often by burning, in order to cleanse and restore honor to the family. One example of how a woman can bring shame to her family is to talk on a cell phone to a male who is not her husband or family member. Rape survivors are often forced to marry her rapist to restore this so-called family honor. In addition, the law includes provisions for the perpetrator in that if he agrees to marry the woman or girl that he raped, he receives minimal penalty for his crime.

The government has passed some important legislation in recent years, including the Family Violence Law in 2011, which includes some provisions to protect women and girls. However, this law is not being implemented, and international legal experts say that due to the many contradictions within the law itself and with the Constitution and other laws, it is impossible to implement; the law leaves too much room for interpretation, allowing the personal, cultural, and religious beliefs of judicial officials and tribal leaders to guide their decisions when faced with reports of honor-killings and other forms of gender-based violence. While these legislative efforts are encouraging on the surface, the laws are flawed and impossible to enforce as written.

I believe Kurdistan is moving through some difficult cultural and political changes; it wants to be a free and progressive society while holding onto to traditional norms that are harmful to women and girls. In there lies a conflict. A society cannot be truly free until all people enjoy equal rights, are living lives free of oppression and violence, and have equal access to resources. That goes for you too, America.

Do I feel like I’ve made any significant contribution to protecting the rights of women and girls? Most days, I do not. Some days, I do. I have some great Kurdish co-workers who are committed to improving the status of women and girls in Kurdistan. I am grateful for this. The progress is slow and sometimes invisible, and there are many discouraging moments. It will be interesting to see how Kurdistan deals with this dichotomy of tradition and progress in the coming years. I will always keep one eye on Kurdistan, no matter where I am in the world. Some places just leave a mark.

Catherine Broughton is a novelist, a poet and an artist.  She lives most of the year in France, with extended patches in Belize and in the UK.  She was born & raised in Africa and has lived as an ex-pat, in one country or another, almost all her life.  Her books are available as e-books on this site (click below), can be ordered from Amazon/Kindle or from any leading book store or library.