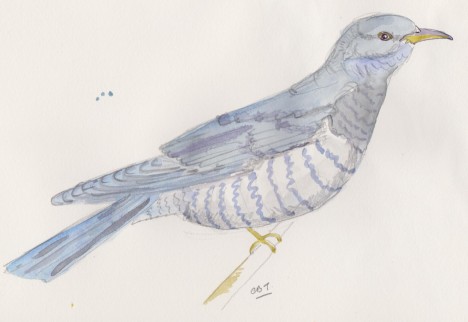 Ah, the first signs of The End of the Winter – today we heard the cuckoo !

– there are many types of cuckoo

– most are beige/brown or blue-grey in colour

– they spend most of the year in Africa and from there travel all over Europe, Asia and Australasia

– the female lays 12-22 eggs, all in different nests, usually nests belonging to the pipit or the reed bunting

– they get their name from their distinctive call (ie their name is onomatopoeic), though in fact not all cuckoos make the well-known distinctive sound, and also it is anyway only the males

– in the UK the tradition used to be that you phone The Times to tell them when you hear the first cuckoo!

Click below for “A Call from France” by Catherine Broughton:-

Catherine Broughton is a novelist, a poet and an artist. Her books are available on Amazon or Kindle, or can be ordered from most leading book stores or libraries.  Her titles, and more about her and her work, are on http://turquoisemoon.co.uk