A few million years ago, when I was a student, I read “Candide”.  I can’t remember whether I read it in French or in English, but I do remember commenting that I thought it was a really stupid story, and getting in to considerable trouble with my Voltaire-loving lecturer.  I started leafing through some Voltaire again a few years ago, but reading it is too much like hard work these days, and the interest has gone.

However, it cannot be denied that Voltaire (1694-1778) was an extraordinary man for his time.

Voltaire was born Jean-Marie Arouet and used almost 200 different pen names.  He has gone down in history as Voltaire, a name he seems to have adopted in 1718 or so, the origin of which is unknown.  It is possible it is a Latinized anagram of Arouet, which is one theory, but I think it is far more likely that he chose the name because of its associations with flight : voler, to fly (also to steal actually), voltige, acrobatics; volatile, anything that flies (its meaning of that time, the meaning of the word having been distorted over the years).  That seems to me to suit his personaility far more than a Latin anagram.

He was one of five children (though three of them died as babies) born to a lawyer and a minor noblewoman from Poitiers.  He was destined to become a lawyer like his father, but instead spent his time writing and writing – and pretending to be studying law.  In his life he wrote two thousand books and booklets and over twenty thousand letters and essays.  He was prolific and versatile, and he used almost every literary form, from poetry to plays, novels and novellas, and books long or short on theology, science, philosophy and history.  He was essentially a polemicist (ie his style of writing put forward arguments against what others had written), and he felt very strongly against the Roman Catholic church – or any established and hierarchial church, for that matter- and made no secrets of his opinions.

The law and religion

This was a time when, in France, there were heavy punishments for speaking out against the establishment, and Voltaire found himslef in and out of trouble with the authorities many many times, to include being imprisoned in the Bastille for several months, and to also include being exiled from France. 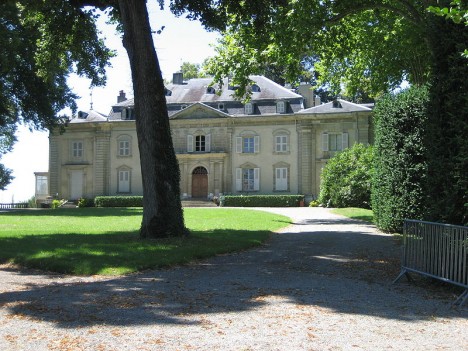 Voltaire’s main (and absolutely right) grouches were about the power of the church (in this case the Roman Catholic church), the hypocrisy of the church regardless, the total lack of freedom of choice in religion, the link between church and government, the government itself (France had an absolute monarchy, 100 years behind England – as it was then – who had had a constitutional monarchy for a long time).  He was against social and legal intolerance and, later in life, wrote steaming letters about the death of a man named Jean Calas who was killed over a religious argument. The case was so dreadful that Calas’ widow had all her children removed from her and dumped in a monastry where they were forced to enter a monastic life.  Thanks largely to Voltaire’s interference, the conviction against Jean Calas was overturned and the widow and her children reunited.

Newton and Frederik the Great

All this, however, happened in later life, when Voltaire had become rich and influential.  In early life, although his huge wit and power with both verbal and written repartie, made him extremely popular among the aristocratic and intellectual classes of Paris, he was forever in trouble with the law.  Eventually banned from Paris and thence exiled to England, where he spent three years, and where he greatly admired the English system with its religious tolerance and freedom (relative) of speech, not to mention the constitutional monarchy.  He loved English beef!  He particularly admired Sir Isaac Newton. 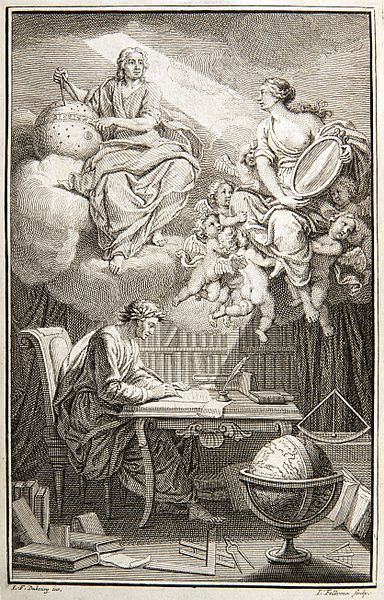 (This picture shows Voltaire and his lover, Emilie du Chatelet, and the infulence of Newton in their thinking.  Science, mathematics, religion, etc are all represented in the books, the celestial globe and the earth globe, the “heavens”, the instruments).

Another person Voltaire admired was his great friend Frederik the Great of Prussia, who had introduced tolerance in its varying forms in to his kingdom.  Voltaire lived in Frederick’s palace in Pottsdam for some years but they too fell out and Voltaire had to flee back to France.

Because of his anti-religious beliefs Voltaire was not given a Christain burial, though over 100 years later he was re-buried with great pomp and ceremony at the Pantheon.   He has his place in history as one of the world’s great thinkers and arbitrators for change in the establishment.  He lived and worked during the Age of the Enlightenment where intellectuals all over Europe were questioning the status quo and making changes that are with us to this day.

Catherine Broughton is a novelist, a poet and an artist. Her books are on Amazon and Kindle, or can be ordered from most leading book stores and libraries.