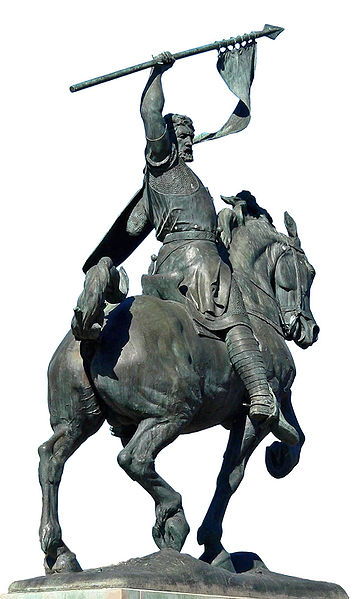 I remember very well that wonderful film with Charlton Heston and Sophia Loren!  What a heart-wrenching story and what a great film it seemed at that time – I’d love to see it again, but would probably nowadays find it “tame” and a bit silly.  But it was excellent in its day.

El Cid (1043-1099) is the national hero of Spain.  He is remembered in films and plays, books and songs, poetry and more.  We have no idea whether or not he was the muscular handsome hunk we think of, as portrayed by Charlton Heston, but he was a great soldier and military leader, certainly a charismatic and determined man, and he has gone down in history as the epitome of Great and Virile Manhood.

He was born into minor nobility and named Rodrigo Diaz de Vivar, in the ancient town of Burgos (see yesterday’s blog) which was part of Castille.  He was nicknamed el Cid which is the Moorish word for the Lord (Lord as in nobility and not as in gods).  He grew up in the royal household under King Ferdinand and was a companion to the prince, Sancho.  This was an era when what we now call Spain was divided up in to several small kingdoms, and fighting between the kingdoms, which in turn was often between kin, was an on-going situation.  El Cid was instrumental in defeating Sancho’s two brothers who tried to invade Castille, and he also helped to drive the Moors out of Andalucia in southern Spain.  Although what little documentation there is about him is scant, it seems he was a fierce and a fearless fighter, a brilliant tactician, and a well-loved person in his own right. 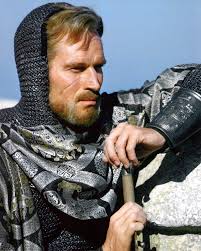 Sancho became king after his father died but, unhappily for El Cid, Sancho died childless and the throne passed to his hated brother, Alfonso.  Alfonso exiled El Cid from Castille.  El Cid moved down to Zaragoza where he allied himself with the Moors – and became a formidable mercenary soldier.  Such was his reputation that Alfonso eventually had to sink his pride and ask El Cid to return to Castille.

El Cid married Jimena Diaz and between them they created their own kingdom on the Mediterranean, Valencia.  The film portrays them as a great love match, but we have no idea whether this is the case or not.  They had one son, Diego, who was killed in battle in 1097.  El Cid died barely a year later and for a while Jimena ruled Valencia alone.  The scene in the film where El Cid is strapped, dead, on to his horse, is fiction. 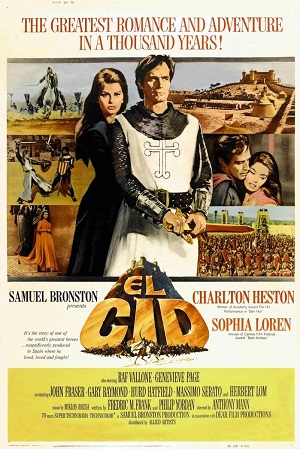 Catherine Broughton is a novelist, a poet and an artist. Her books are available of Amazon & Kindle, or can be ordered from most main book stores and libraries.  More about Catherine Broughton, to include her entertaining blogs and her sketches, on http://turquoisemoon.co.uk

For more about el Cid:-