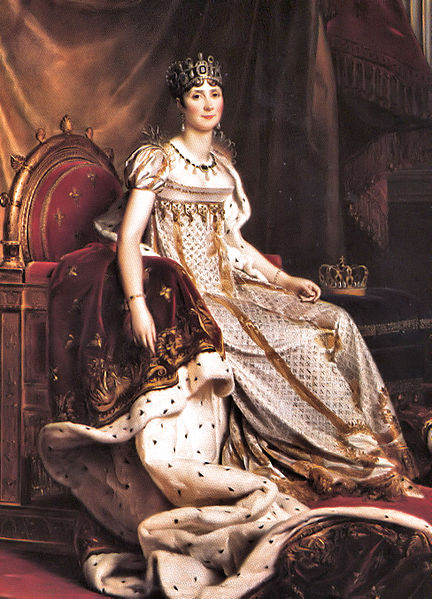 Josephine as Empress of France. She is surrounded by the trappings of wealth and power. On the seat beside her is Napoleon’s own crown.  It is interesting to note the elongated limbs. If you study the figure, you can see that her torso and legs are way too long for her.  This was usually reserved for portraits of standing men, to make them look taller and more powerful.

Josephine Bonaparte (1763-1814), first wife of Napoleon Bonaparte and First Empress of France was born in Martinique and named Marie Josephe Rose Tascher de la Pagerie, and was always called Rose. It was Napoleon who preferred to call her Josephine.

Her wealthy family plantation in Martinique was all but destroyed in a hurricane, leaving the family relatively poor.  Josephine’s grandmother saw a way out of this predicament by arranging for the younger of the two girls, Catherine-Desiree, although only twelve years old, to marry the son of a very rich French Count with who she (the grandmother) had once had an affair.  The man in question was Alexandre de Beauharnais but before the child could set off from Martinique she died of croup.  She was thus replaced, so to speak, by Jospehine, aged 16, who set off for France with her father in 1776. 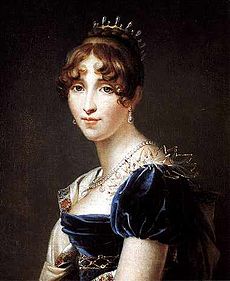 The couple were married and they produced two children, despite it not being a happy marriage.  The two children, Eugene and Hortense were born in to high aristocracy and huge wealth.  Hortense was later to marry Naploeon’s brother. 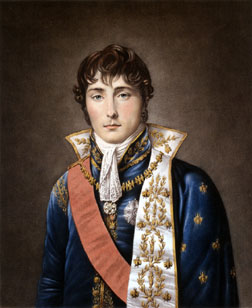 Meanwhile the Reign of Terror took hold of France and anybody even remotely connected with the aristocracy was at risk of being guillotined.  This mass slaughter included household servants, doctors, teachers, governesses or simply people who got in the way … or who did not get in the way! It was one of the most horrific blood-baths of humankind in which over a million civilians were deliberately slaughtered.  Alexandre de Beauharnais and his family were imprisoned in Paris on trumped-up charges of some kind of treason, and Alexandre was duly guillotined.  This coincided with Robespierre, the evil behind the murders, dying, and Josephine and the children were freed.  The horror of what she had faced stayed with her to the end of her days. 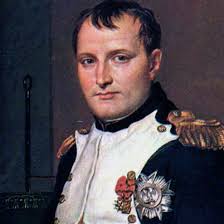 Josephine was left an influential and wealthy widow.  Peace crept slowly back in to the country, Josephine became Napoleon’s mistress and he was totally besotted with her.  He was six years younger than she.  In 1796 they married.  Many love letters from Napoleon to Josephine survive, most of them passionate and quite blatant; there are almost none from her to him however – did they get lost or did she not write them ?  I think Napoleon was a passionate man, whereas Josephine was probably down-to-earth when it came to matters of the heart – after all, she had travelled across the world, seen her sister die, been victim of an unhappy marriage, been through childbirth, seen her first husband guillotined and been in prison along with her children – all in the space of a few years.  Love letters were probably not her genre.

Napoleon created a new hereditary monarchy in 1804, crowned himself Emperor and crowned Josephine Empress.  Napoleon had many mistresses which caused hurt and fighting in the marriage; Josephine had at least one affair that we know of.  Unhappily, although Josephine had already had two children, she did not become pregnant again, and Napoleon divorced her “for the sake of the Empire”.  Members of the household reported that all over the house they could hear Josephine screaming and screaming “je ne m’y remettrai jamais!” – I will never get over this. 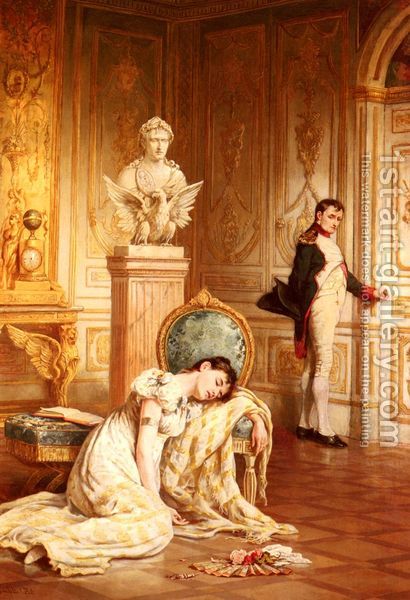 a painting portraying the swooning Josephine while a disdainful Napoleon walks out; this is historically incorrect, Napoleon did not really want the divorce, and Josephine did not faint. There are a lot of paintings of this subject. I don’t know who this artist is, but at a guess I’d say it is a British artist and that it was done in the late Victorian period, 1890 or so, when romanticism and gushy sentimentality were at their zenith in story-paintings.

Napoleon married Marie-Louise of Austria in 1810 and declared dryly “j’epouse un uterus” – I am marrying a womb.  A son was born in due course, and Napoleon declared him “King of Rome”.  The baby was shown to Josephine, Napoleon told her “the least I can do is show you the cause of all your tears.”

Napoleon and Josephine remained close friends, and perhaps even lovers.  Immediately after the divorce she moved to her exquisite house near Paris, Malmaison.  Alongside her party-loving and bejewelled image, she was a kind and thoughtful woman who financed several orphanages and arranged for the care of foundlings.  She died suddenly of pneumonia in 1814 when she was 51.

Josephine’s bedroom at Malmaison. The property is open to the public and, as well as the house, boasts Josephine’s exquisite rose garden