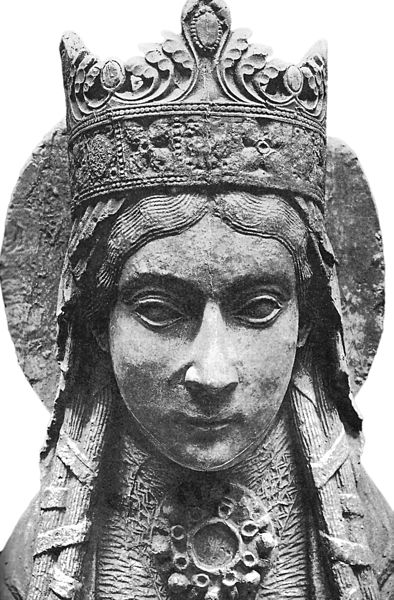 Yesterday I was looking at a sketch I did for one of my children’s history classes when he was little (the school had no text books**) and that in turn made me look up Saint Clothilde.  There is a dirth of information about her, and what little there is was written by Gregoire de Tours (539-594), a great historian of France in the 6th Century.

Clothilde was cannonized basically because she converted her husband, Clovis, to Christianity and all their five children baptised as Christians.  She was a princess, the daughter of the king Gondioc of what is now the Burgundy area of France.  She had several brothers and sisters and, according to Gregoire de Tours, lots of murders and dastardly deeds were done, to include the killing of both Clothilde’s parents by one of her brothers.

Clothilde and her sister, Croma, went in to a nunnery when they were still very young, one assumes to escape the murders.  There they lived exceptionally pious lives.  It is not clear why Clothilde came out of the nunnery to marry Clovis, who was king of the a large part of northern France (or Gaul as it was then).  She was aged 28, very old for marriage at that time, and it appears that her good looks attracted the attention of an ambassador to Clovis, who in turn made the introductions.  Clovis was a brilliant military leader and defeated the Wisigoths (now Germans) who were installed in the north eastern part of Gaul, which in turn made him king of the Franks.  His capital city changed from Soissons to Paris.

Clothilde was involved in the building of several abbeys which are today historic monuments.  She died aged 80 – exceptionally old for the day – and is buried at the Abbey of the Saint Apostles in Paris.

Catherine Broughton is a novelist, a poet and an artist. Her books are on Amazon and Kindle, or can be ordered from most leading book stores and libraries.  For more about Catherine Broughton, to include her entertaining sketches and blogs, go to http://turquoisemoon.co.uk

Click below for “A Call from France”, a true story and a must-read for mothers, especially mothers of teenagers:-