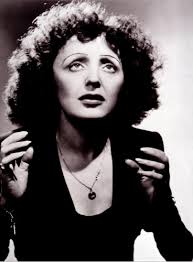 I have to say that I cannot abide her singing, but I am not a musical person and I am sure that her singing is wonderful …. just that I don’t like it.  Oddly enough, although Edith Piaf grew to be internationally famous, and although there are several books about her, relatively little is known and, due in part to Edith’s own verbal embroideries, there are all sorts of myths surrounding her birth and her childhood.

Edith was born Edith Gassion in 1915 in to a poor family of street artists and small circus performers.  Her mother, who was part-Moroccan and part-Italian, abandoned the baby at birth, and she was given to the paternal grandmother to raise.  The grandmother ran a small brothel in Paris, and the little girl grew up amid prostitutes.  It seems to have been a happy patch in her life, however, which lasted some 3 or 4 years when her father, who had been working elsewhere, came to fetch her.

The only existing photo of Edith before fame, probably aged 5 or so

She joined her father as a street artist, sometimes performing in small circuses, and it was in one of these venues that she was discovered to have her amazing and unusual voice.  A nightclub owner in the Pigalle area of Paris took her on, and she sang for the first time amid upper-class clients.  She was apparently extremely nervous and took some persuading. It was here that she earned the name Piaf, which was to stay with her for the rest of her days – a piaf is slang for a sparrow, the correct translation of sparrow being moineau – because she was very small (4’8″) and, poor kid, trembled like a little bird. 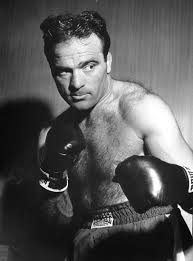 Sidi Bel Abbes was a pied-noir, and won his first match in Meknes, Morocco. He was only 33 when he died.

Once introduced in to the necessary circles, Edith Piaf soon became well-known and much sought-after.  At age 17 she became pregnant, but the baby died within a short time. She was to have no other children.  In 1948 she met, and fell in love with, the world middle-weight boxing champion, Sidi Bel Abbes.  He was already married with 3 children, but he and Edith were devoted to each other and lived together along the Champs Elysees.  Edith Piaf had become rich, and counted people like Charles Asnavour and Jean Cocteau among her friends.  However Sidi Bel Abbes was killed in a plane crash a year later, and Edith sank in to depression, followed by morphine and alcohol addiction.  From there, despite a couple of come-backs, Edith seems to have deteriorated rapidly and suffered with ill health almost constantly, due mostly to her addictions but also to her physical inheritance of frailty after generations of poverty.  She was 47 when she died. 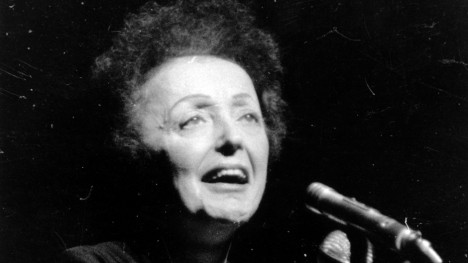 Edith Piaf aged 44, 3 years before she died – she looks so much older

Catherine Broughton is a novelist, a poet and an artist. Her books are available on Amazon and Kindle, or can be ordered from most leading book stores and libraries.  More about Catherine Broughton, to include her entertaining blogs and her sketches, on http://turquoisemoon.co.uk

Click below for “Saying Nothing”, an unusual love story set in Spain:-

For more information about Piaf:-