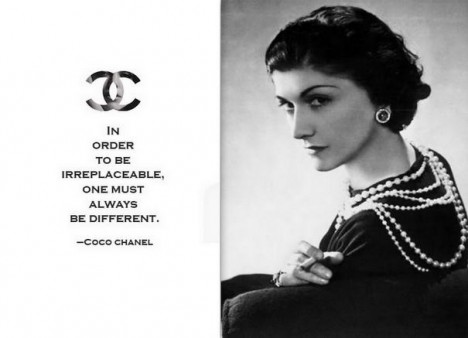 Gabrielle Chanel (1883-1971) got her nickname of Coco when performing in a bar soon after she left the orphanage where she grew up.

She was the illigitimate and fourth child of a Parisian couple who married when Coco was about a year old.  Two of the seven children died as babies, leaving Coco with one older and one younger sister, and two older brothers. Her mother died aged only 33, and the father placed the three little girls in an orphanage, the two little boys on to farms as free labour, and set off for America.  He was never heard if again but in later life Coco would invent exciting aventurier stories about him.

Coco with her Great Dane, Mat.  Coco was very small and had a light, fragile frame, something which contributed to her schoolgirl look

Coco’s years in the Correze orphanage were to mark her forever, and are reflected in the austere colours and straight lines she chose in her designs.  Many of her clothes were black and white, like nuns, and severe and geometric.  When she left the orphanage, where it seems she was treated kindly, she went in to training as a seamstress. Aged only 17, she was enterprising and determined.  She earned extra money by singing in bars in the evenings; apparently she had a mediocre voice, but was small and sweet and people liked her.

Her big break came when she was 22 and met one Arthur Capel, nicknamed “Boy”.  She had had two or three love affairs, determinedly with relatively affluent men who could help her on her way, and through these she started to mix with the “right” kind of people. Her big break came with Boy, however, the son of a banker and an astute – and wealthy – businessman.  He was a very keen horseman and took Coco to the races with him where Coco wore hats of her own design.  They were an instant success.  The huge ostrich feathers and general froufrous that had dictated hat fashion for so long were almost entirely left out of Coco’s desgins.  She wore her hair cut short in a tom-boy manner and totally rejected corsets and voluminous petticoats. It was all very plain for its day but women, tired of being restricted by movement-impeding fashions, took up Coco’s new look with pleasure. 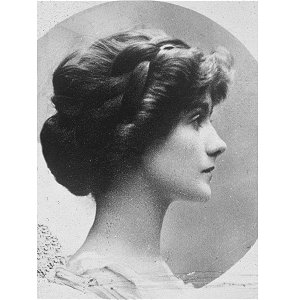 Early shot of Coco, looking more traditonal for the era

The First World War in itself brought out a new kind of woman in many areas of Europe and in many areas of trade.  Coco championed shorter skirts and clean, straight lines, simple and practical clothes that could be worn with ease.  It was called the “silhouette neuve”.

Coco opened boutiques in Paris, Biaritz and in Normandy, financed by Boy.  She was one of the first fashion designers to launch in to perfumes, dress jewellry and black – hitherto black had been only for funerals and for mourning. Coco Chanel created the first “petite robe noire” – little black dress – not just the dress, but the concept.

By the time she was approaching her forties Coco Chanel was friends with people like Salvador Dali, Jean Cocteau, the Duke of Westminster, Toulouse Lautrec, Renoir, Picasso – and others. 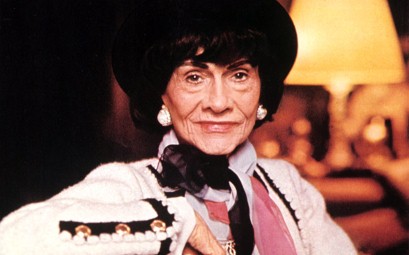 World War II put an abrupt end to the Paris life, and Coco moved to Switzerland, where she lived for ten years and concentrated only on perfume – Chanel no.5 being her most famous.  She loved Switzerland and later said that it was the most peaceful and pleasant period of her life.  She never married and had no children and only returned to Paris in 1954.  As the 1960s approached, accompanied by the total downward slide in fashion conformity and the hippies, Coco remarked “fashion is something that should be taken out on to the streets, not brought in off them!”  She died in the Ritz hotel in Paris in 1971, aged 87, and is buried in Switzerland.

Catherine Broughton is a novelist, a poet and an artist.  Her books are on Amazon and Kindle, or can be ordered from most leading book stores and libraries.  More about Catherine Broughton, to include her sketches and short stories, on http://turquoisemoon.co.uk

Click below for Catherine Broughton’s best-seller, a novel set in Cyprus:-

For more about Coco Chanel:-