One of my favourite things, part 4. Rupert Brooke 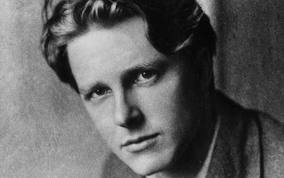 I suppose I came across Rupert Brooke when I was a school girl, for we almost certainly had to learn that poem The Soldier …. “If I should die, think only this of me …”  I can still recite the whole thing.  There was – and is – something about the few photos that exist of him that is hugely romantic.  Indeed, Yeats described him as “the handsomest man in England”.  Yet there is nothing big and strong about him.  He was just beautiful in the simplest sense of the word.

In those days I knew nothing of his bi-sexuality. Indeed, I wouldn’t have understood what it meant.  His love poems, always stirringly poignant, are clearly about women, many of the earlier ones about Ka Cox, and later ones about Taatamata, a Tahitian girl by whom he apparently had a daughter. His poem “Waikiki” was doubtless written with Taatamata in his heart. I wonder if he knew he had a daughter ?  I hope so. “Warm perfumes, like a breath from vine or tree, drift down the darkness ….”

Rupert Brooke travelled a great deal before the war, around the USA and Canada and then the South Pacific.  He came to public attention when the Times Literary Supplement quoted two of his sonnets, though within his own circle he was already well known and a member of the Marlowe and Bloomsbury sets, among many other influential groups.

He was only 27 when he died aboard a French military ship moored in the Aegean at Skyros, during the first part of World War I.  He had developed sepsis as a result of a mosquito bite and is buried there on the island.  He went through a patch of being branded as “soppy” and effeminate, but he is back in vogue and I have always loved him.