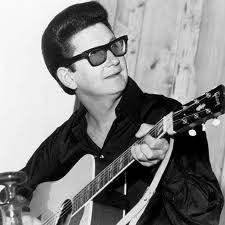 It is odd that singers like Mick Jagger, Elvis Presley, Bono etc., are almost household names in every generation, yet Roy Orbison isn’t.  I suspect my children have never heard of him.  But he worked alongside many great names, to include the above, was revered by them, and was every bit as popular.

Those of us who do know of Roy Orbison will also know his instantly recognizable beautiful baritone voice.  There was something heart-wrenching about his way of singing, and his is a voice that could be mistaken for no other.  Although he was, technically, a rock star, his genre was different – soulful and piercing balads, hurt love songs, provoking and sensuous lyrics, all delivered in that gorgeous voice.

Yet Roy Orbison was not a good-looking man. Like Frankie Laine before him, he was a mediocre-looking chap, whose fame came uniquely from his voice.  Unlike Elvis Presley with his smouldering good looks (and Lord knows what Mick Jagger had to offer … but we won’t go there) Roy Orbison has sticky-out ears and very bad eyesight.  His hair went white at an early age, and he died it black, wore black clothes and dark glasses to hide his myopic sight … I suppose this gave him a mysterious and enigmatic aura, but it was his voice that made him.

Born in 1936, he was one of several children, all blighted with the same eye problem.  His father was a coal miner.  The young Roy Orbison started singing on radio when he was only 8 years old and by the time he was 22 he was a star.  His first wife died in a motorbike crash, and just as he was starting to recover, two of his sons were killed in a house fire.  Roy Orbison eventually remarried and had at least two other children, but the tragedies took their toll on him and he died in 1988 of a heart attack, aged only 52.

Click below for Catherine Broughton’s best seller, “The Man with Green Fingers”, a novel set in Cyprus:-