It happened like this … an English family move to France. Part 8. Life in France. 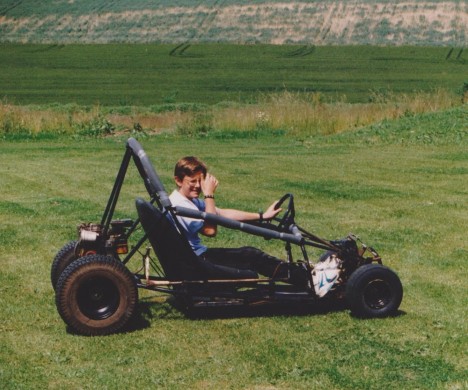 The letter stated, quite simply, that we owed this huge sum of money and that it should have been paid at the time of the purchase.

I phoned the appropriate office but the person at the other end of the line had no idea what I was talking about and the reference number on the letter didn’t seem to help.  In fact, she said the reference was nonsensicle, even though I read it out carefully two or three times.  She suggested I phone back later, which I did, but that didn’t seem to make any difference.  We went through the same introductions and I finally asked her why she had suggested I phone back later ?

The British Consulate had once given me a good tip – always ask for the person in charge because a) it makes the one who answered your call jump to attention (his words) and b) the person in charge likes to feel s/he is indeed In Charge and does his/her best to have the appropriate information for you.   Thus I was eventually passed on to somebody else (ne quittez pas!) who then passed me on to The Man Who Had Signed The Letter.  All this took ages, and I waited through a variety of tunes, to include the inevitable Green Sleeves.

“I should hope it is!” I exclaimed, “we have done a great deal of work on it!”

“At the price you paid, it would mean it was a ruin when you bought it,” replied the man dryly.

“It was!” I said crossly, “it was a ruin and we have done it up, and now it is worth a great deal more!”

“Nobody can do that amount of work in so short a time,” he replied with a sigh of impatience.

I made an appointment to see him.  He was off on holiday and couldn’t see me till he got back, three weeks hence.  It was maddening.

I knew what had happened and had, in fact, dealt with a similar problem for one of my clients earlier that year.  You see, when you buy a property in France, you pay what are usually referred to as les frais de notaire.  This is a misnomer because only a fraction of the fee goes to the notaire; the rest are government taxes, like land tax in the UK.  These taxes depend on the value of the property.  Because Primrose was now worth considerably more than 350 000 francs, the powers that be, in their wisdom, decided that we had given cash to the vendor and only allowed the 350 000 francs to appear on paper, thus saving us thousands in land taxes.  In small village communities and with a people who don’t move house very often, this was quite possibly fairly common practice.  With computerization I expect all this kind of shinnannigans is impossible now, but when you consider that the local notaire was quite plausibly the brother of the buyer or the vendor, or the godparent or something … it doubtless happened more that the authorities cared to admit.

Anyway, it had not happened with us.

Irritated and, of course, concerned, I waited for The Man’s holiday to expire.  We still had the Court case for the Carte Professionelle hanging over us, work to be seen to, irritations and upsets with clients, the children to raise, stuff … you know how it is.  We led busy, active lives.

Finally, armed with a mercifully huge collection of before-and-after photos, I went to see The Man. The office was near the station in Rochefort close to an Emmaus which has since closed down – a pity because it was really good.  To this day the Emmaus in St Agnant, in aid of the homeless, is one of my favourite afternoons out – I love bric-a-brac and old furniture and what other people consider junk.  Nowadays, however, you can only rarely pick up real goodies for a song because, like charity shops in the UK, an expert comes in to value things.  But if you have got an eye for possibilities, it is a fun place to go.  As far as I am aware it is the only charity shop in France – but I may be wrong about that.  Emmaus is Biblical –  it is the name of a hamlet just outside Jerusalem, and a couple of pilgrims saw Jesus there, after Jesus had died.  It features in the gospel of St Luke. 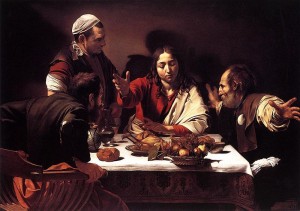 The history of Art is my totally favourite subject; this painting is by Caravaggio, dated 1601, and named The Supper in Emmaus.  It is a lovely example if chia oscuro, ie use of light and shade.

Anyway, I diverge …  I made my way to the appropriate room, up a flight of tiled steps and in to a spacious office overlooking the railway.  There I was greeted by a pleasant-looking man in his forties.  He wore half-moon glasses.  An enormous weariness came over me and I flopped in to a chair without being asked and flung, perhaps a tickle rudely, the photos down on to the desk.  He raised an eyebrow at me.

He didn’t respond.  He probably thought he had misheard.. . or perhaps he thought it was something English women say, the way the French say “bonjour” and kiss each other.  Perhaps all English women sit without being asked and announce whether they are tired or not.

He picked up the packet and tipped the contents out on to his desk.  He looked through the pictures with genuine interest and, to my surprise, said (but in French):

“Yes, I have heard that les anglais are very good at restoring our old properties …”

He flicked through the photos, occasionally asking a question, and was quite interested in which room was which, how we had repaired the staircase, did I think the staircase was original, and he was so glad we’d kept the fleur-de-lys floor tiles in the hall … and so on.  He said he’d love a house like that but that his wife would never agree to living in such an isolated spot.

“It was nonetheless exceptionally cheap,” he said finally, putting the photos to one side.

“You are not telling me that one is not allowed to do a good deal in France, are you?!” I asked.

He handed the photos over to me and told me he would reach his final decision in due course.  And that was the end of the interview.  I wanted to thump my fist on the table and yell … but I just smiled and left … as one does.

About six weeks later a letter arrived from The Man, telling me that all charges were dropped and that we had nothing to pay.

“I could have told you that for free!” I shouted in to the empty room.

We finally appeared in Court about a year after the gendarme episode.  It had eaten at me almost constantly, and I had been veering from panic about going to prison to what-fun-going-to-prison-how-jolly-interesting-that’ll-be!  Most of the time that inbred positivity remained with me and I didn’t think for one moment I would go to prison or anything like it.  In fact, in many ways most of me just considered the whole thing massively tedious at a time when I already had too much to do.

I don’t know what I expected once I got in to the Court room – if I had expected anything at all – but one thing that did strike me was that, as each person’s turn came round, there was no notable calling-out of the name: Dupont v. Renaud!  That sort of thing.  Names of people, banks, businesses or whatever were sort-of half-mumbled by somebody sitting at the judge’s table, so when our turn came I had no idea we had started till I saw Vincent, our dear little lawyer, stand up and point to me.

The Ile de Re

We went off to the Ile de Re camping that week-end.  We lay on the beach with the children, and we splashed in the cold Atlantic waters.  We tried to wash it all away in the sea and bask it all away in the sun.  In the evenings we almost always ate out, overlooking the little port at St Martin or the little place at Ste Marie.  We cycled for miles and miles, along the pistes cyclistes that wound past the beaches, through the marais and in and out of the villages.  Miles of cycling.   I needed to work it out of me somehow; I was furious, relieved, stunned, weepy ….I saw a young man bareback on a huge shire horse.  I saw fishing boats pulling lobsters in.  I saw my children play on the sand.   I watched the sun drop over the horizon to the places where I was born and had lived. I listened to the waves splashing on the beach all night.

I felt it was time to move on.

Catherine Broughton is a novelist, a poet and an artist. Her books are available of Amazon/Kindle worldwide or can be ordered from most leading book stores and libraries.  They are also available as e-books on this site.